‘So Much Work To Do’ On Prospect Ridge 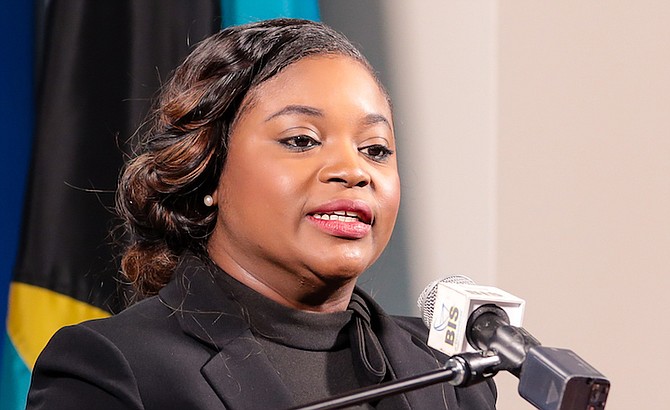 JOBETH Colbey-Davis said that although her team is confident the Davis administration can still proceed with the Prospect Ridge project, the government cannot commit to the cost benefits the Minnis administration promised because so much work is still required on the development, including the production of a master plan, a feasibility study and topography studies.

Mrs Coleby-Davis, Minister of Transport and Housing, expressed her views during the administration’s first official press briefing at the Office of the Prime Minister.

To provide affordable housing to young professionals, the Minnis administration pledged to absorb whatever infrastructural and related costs were needed to let qualified applicants buy property for between $40,000 to $50,000.

Mrs Coleby-Davis said the Davis administration will not commit to doing the same, not least because it does not know the cost details.

“I cannot work blindly. I must be able to say what costs the Davis administration will be absorbing when I go and present my case to the Cabinet and so in order for me to say that, and confidently, I have to be able to provide the information and that’s why I need to get all of the groundwork done, but we will ensure that we provide affordable housing to the Bahamian public. That’s the priority. It may not be on the same level in certain areas because it depends on how the lay of the land works, but the overall purpose is for us to provide affordable housing.”

Mrs Colbey-Davis said her team has had many meetings related to the project and has found that there is no master plan and no feasibility study.

“I’ve spoken to the company that was previously engaged by the former administration (to do the master plan) and absolutely nothing has been done yet,” she said. “In fact, they got a letter advising them that they have (been awarded) this project probably about two or three days before the election. So nothing has been done in terms of creating a master plan to do the work at Prospect Ridge, to begin to draw out how it will actually look. There has been no feasibility study, no topography study to actually provide us with the lay of the land, what lumps and bumps presently exist and how we would have to fill it in so we are not in a position yet to determine the infrastructural costs.”

She added: “We cannot commit to what was previously announced.

“The fact that you (had) a billboard that has a photo but you have no master plan, one wants to know where that photo came from, so did they grab it off of Google, I don’t know. We don’t know where the numbers came from for the land costs and where the pictures came from.”

However, Senator Viana Gardiner, head of the Prime Minister’s Delivery Unit under the former administration, said a lot of work was done to make the project a reality. She said a strong foundation was established for the Davis administration to build on.

“For this community, the former government took the legal steps to secure the land for the development and completed the conceptual sketch of the development, the detailed Environmental Impact Assessment of the land, the procurement process for infrastructural and architectural drawings, and the application process, including a review of 1,500 applications by independent accounting firms,” she said in a statement.

“Following a bidding procurement process, Islands by Design completed the Environmental Impact Assessment (EIA) on the land within the allotted time frame and submitted it to the Department of Environmental Planning and Protection (DEPP) for its review.

“The DEPP completed its review and advised the Office of the Prime Minister (OPM) on the eve of the general election that the environmentalists needed to augment the EIA with topography studies. The housing minister could only have made some of her comments because of the findings from the work already done. The comments also suggest no action was taken by the Davis Administration on the DEPP’s advice.”

Officials have said about 1,500 people applied for the programme.

Anyone who has ever walked that area knows it is not that feasible to build on. IF people were to build on the cost to do it will be enormous. If they go ahead I am pretty sure it will be the Pinewood of that area.

To provide affordable housing to young professionals, the Minnis administration pledged to absorb whatever infrastructural and related costs were needed to let qualified applicants buy property for between $40,000 to $50,000.

Just tell me what in the hell gives any FNM or PLP cabinet administration or PM the right to cherry pick a select group of Pauls ("young professionals") in our society to be unjustly enriched by the wrongful robbing of the rest of us Peters in order to give overly-generous property and housing benefits to the favoured Pauls when all of our citizenry under our Constitution should be justly and fairly treated by our government without undue favouritism of one over the other???!!!.

And don't both to give me an answer unless you're prepared to read my carefully worded question at least twice.

Word "both" at start of very last sentence should be "bother".

Girl carry ya "shifty" behind and talk like you have some sense!! Yinna know how we or any other nation for that matter do "future" housing developments!! Iffin we "get tools in the ground" within 5 to 7 years we a re the lucky few!! That was surely an election "juicy piece". . .but to come and say "ween see notin yet" since that "project" was announced about a year ago. . .if that much time. . .is just dumb nonsense!!

Now "I een know masef" if this will turn out like some of them other projects from time immorial. . .just like them golden girls them "project". . .20 years now and they "still waiting" for that project to get started!!

For example, the Golden Garden Estates. . .We played in that area for almost 20 years as children. Trenches and water and light came in at a "painful" trickle. . .until after we have completed high school. . .boom!! Garden Hills Estates was born!! After my whole childhood past "huntin" throught the roads and cleared down lots in the development!

how many of those igloos got built?

It would have turned out exactly like those other projects. Poor planning.

I remember driving past that area frequently as a child, I always thought it was really beautiful, it looked like a real "wood", something I would see on tv but not in real life. I remember hoping noone ever built houses there. I would not be sad to see the entire development plan collapse

All the hills along the highway are gone, I remember them too. You cant find a single seashell on the beach...what are we doing????

Beach erosion and the excavating of hills in Nassau played a major part in the flooding problem we see today in communities like Pinewood, Seabreeze and Big Pond.

PING! You hit the nail right on da head. . .alla them ares you called were swamps. . .they filled them in and made living spaces!! I remember as a child our subdividion would "spring" at high tides. . .water would just simply "come up" from the soil and remain until tide goes down!! One yard in the subdivision had fish in the weeds!! In really high tides, we dug through the roots of the weeds and would find fish among the roots. All about in the rottening trash we found fish living there! We would catch fish and put them in jars!!