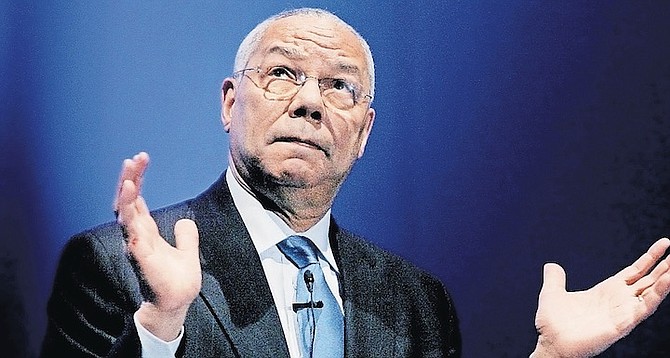 THE flags outside American defense headquarters at the Pentagon were all flying at half-staff Tuesday. Right below them, the familiar black clenched-fist MIA-POW banner saluted those still unaccounted for in overseas conflicts. A stiff northwesterly breeze kept the flags fully unfurled.

Those flags saluted Colin Powell, who had passed away on Monday. Cable newsreaders actually had some Breaking News to report when his death was announced. Powell was 84 and had suffered with multiple myeloma and early-stage Parkinson’s Disease. Both weakened him, which in turn made him especially vulnerable to COVID-19, which was the official cause of his death.

“Don’t feel sorry for me, for God’s sakes,” Powell told an interviewer three months ago. “I haven’t lost a day of my life fighting these diseases.”

Powell, the first black National Security Adviser, the first black Secretary of State and the first black Chairman of the US military’s Joint Chiefs of Staff, in many ways epitomised the social, economic and hierarchical progress of African Americans as much or more than did the nation’s first black president.

It has long been an axiom in American life that a career in the US military is one of the most honourable and dependable paths out of poverty and into respectability for young men and, in recent years, women. The American military services – most especially the Army and the Marines – have also long been known as crucibles in which racial bias and prejudice is dissipated in the white-hot cauldron of armed combat and in the rigorous challenges on recruits imposed from basic training through the course of a career. It has been argued that the most obdurate and insidious prejudices remaining in the American military are now sex- and gender-based, rather than originating from race.

The US Navy and Air Force continue to be dogged by intermittent race-based scandals, not only in the active service but also at their prestigious and highly-selective academies in Annapolis, Maryland, and Colorado Springs. But in the ground-based combat services of the Army and Marines, colour blindness has been relatively more successfully instilled.

Powell was raised in the South Bronx of New York City by immigrant parents from Jamaica. They, and he, represent the American Dream.

This man was no Martin Luther King, nor did he aspire to be an orator or an apostle. He aspired to what he largely achieved: He was a soldier’s soldier. But after entering the Army via Reserve Officers Training Corps at the City College of New York (City), Powell became more than a soldier. Aided by a moderate, modest demeanor and a sense of self that precluded bombast, Powell acquired the highest-level political skills that enabled him to navigate the perilous, ambition-filled corridors of the Pentagon, Capitol Hill and ultimately, the White House.

When Powell became the youngest serving four-star general in the Army and leapfrogged many more senior officers in his own and other services to ascend to the pinnacle of the American military, there was grumbling. There were the whispers that often accompany the rise to the top of black Americans, whether it be in business, academia or the federal government.

But Colin Powell was chosen by Presidents George H W Bush especially and his son George W Bush to serve at their side because above all, they trusted his judgment.

As tributes poured in this week in commemoration of this remarkable man’s legacy, many recalled that 25 years ago, as his adopted Republican Party sought a candidate to oppose Bill Clinton in 1996, many power brokers in the GOP looked to Powell. A national figure of unblemished luster, Powell was said to remind party leaders of Dwight Eisenhower, the supreme Allied commander who oversaw the Allied victory over the Nazis and subsequently served not only as president of Columbia University, but also as a popular and significant two-term Republican president in the 1950s.

For a while, it seemed that Powell would agree to offer himself as a candidate, and the news shows were full of speculation about his intentions for many months. But in the end, the general declared that he was “unprepared for the rigors of running for the nation’s highest office”. It was an open secret in Washington, DC, that a major factor in Powell’s decision was a concern that his wife might crumble in the stress of a national political campaign.

At various stages in his distinguished public life and career, Colin Powell was rated in polls as the most admired American. True to the traditions of the American military, General Powell stayed out of politics while he served in the Army. But after retirement, like Eisenhower, he chose Republican politics over the advances of Democratic Party insiders.

This is not surprising, since the culture of the American military – and law enforcement, for that matter – is generally conservative. But biographies and his own narrative support the theory that back in 1996, part of Powell’s reluctance to run in Republican presidential primaries was also based on his astute conclusion that his GOP, already under the influence of Georgia Congressman Newt Gingrich, had chosen a path that would ultimately lead to Donald Trump 20 years later.

Indeed, by the end of the Bush II administration in 2009, Powell had decided to support Barack Obama, and he later revealed that he had voted also for Hillary Clinton in 2016 and for Joe Biden last year.

And while many national Republican figures solemnly saluted Powell this week, Trump reacted characteristically – and gracelessly. “Wonderful to see Colin Powell, who made big mistakes on Iraq and famously, so-called weapons of mass destruction, be treated in death so beautifully by the Fake News Media,” Trump said in a statement. “Hope that happens to me someday. He was a classic RINO (Republican in Name Only), if even that, always being the first to attack other Republicans. He made plenty of mistakes, but anyway, may he rest in peace!”

As ever alert to the weakest chink in the armor of opponents, Trump astutely alluded to the lone smirch on Powell’s laudable record in public service. It happened on February 5, 2003, while Powell was serving as Bush II’s secretary of state.

Outnumbered and outmaneuvered by many in Bush’s inner circle who were determined to get rid of Iraq’s autocratic president Saddam Hussein, Powell was enlisted to justify the forthcoming American military invasion of Iraq on what Powell strongly suspected were spurious grounds. Powell, who was needed to make the case because he was the most trusted person in Bush’s cabinet, dutifully made the following infamous statement to the UN Security Council in accusing Iraq of possessing weapons of mass destruction and malevolence in their prospective deployment.

“My colleagues, every statement I make today is backed up by sources, solid sources,” Powell said reassuringly. “These are not assertions. What we’re giving you are facts and conclusions based on solid intelligence.”

But as Powell suspected, his statement was indeed incorrect. Ambitious and misguided American advisers were pushing an erroneous narrative to justify their own plans, and the US has suffered for it ever since.

As the Guardian reported this week, “Powell’s statement marked a decisive moment in undermining US credibility on the world stage – all the more because of the then secretary of state’s repeated insistence that his claims were based on hard intelligence.”

To his credit, Colin Powell never ducked responsibility for misleading the Security Council and the rest of the world on that February day. He often expressed regret that instead of saluting his commander in chief and dignifying false information by repeating it at the UN, he could have simply resigned his position.

“Delivering that speech at the UN will appear in every obituary that will ever be written on me,” he said. And so it has.

It was Holliday who coincidentally videotaped the brutal beating by Los Angeles police officers of black truck driver Rodney King 30 years ago. LA cops kicked and tasered King, nearly killing him. Holliday’s tape helped create new accountability for police in the US.

When a jury acquitted the officers in April 1992 of all charges, Los Angeles erupted in rioting, burning and looting that lasted for a full week.

In addition to his UN statement (which if he adamantly disagreed with, he should have resigned his position within the Bush administration), Powell's decision to openly support Socialist Democrat Barrack Hussein Obama is an equally large smirch on his reputation.

We appreciate your opinion.

Hey isn't this is the guy that pushed the lies of WMDs in Iraq? (which he knew was a lie from the start of course) He helped to push that fake news narrative to get the US into a war for profit off the anger from 9/11... which Iraq had nothing to do with. That war led to the deaths of tens of thousands of innocents, sank the US taxpayers with over $2 Trillion in debt and helped spawn ISIS. He was also a part of the Satanic elite that enjoy going to Bohemian Grove and getting "faggy" as Richard Nixon described the whole thing.

It takes a REAL DEMON to wage war for profit and kill so many innocent people knowingly and willingly. May he Burn in Hell, right along with Donald Rumsfeld.

Colin Powell could have been a real American hero had he not lied at the UN about WMD. This is the only thing he will be remembered for.

Rumor says he filled the vial with his own urine in a UN toilet...