Vat Bill ‘Before End Of The Year’ 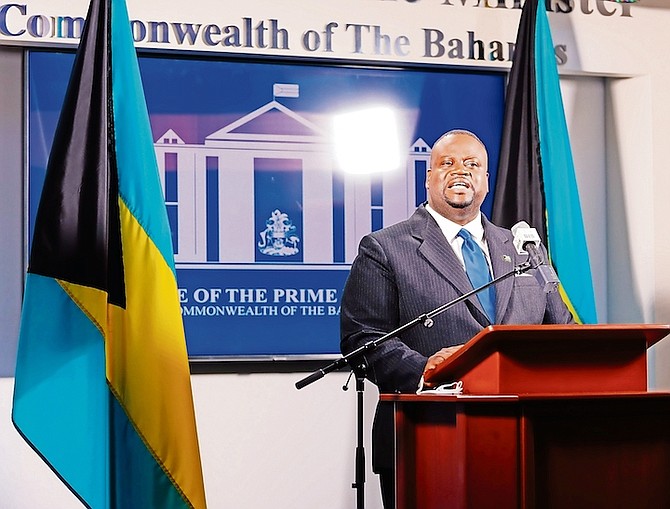 BEFORE the end of this year the Davis administration expects to bring before Parliament three pieces of key legislation, including one that will decrease value added tax to 10 percent from the current rate of 12 percent.

According to Press Secretary Clint Watson yesterday, the government also plans to present to the House of Assembly a Bill for the promised pension increase and a merchant shipping Bill. The latter Bill is in keeping with the Progressive Liberal Party’s campaign promise to boost the blue economy.

Apart from working on its legislative agenda, Mr Watson said the government is working on board appointments.

“The purpose of the legislation is to bring much needed relief to the Bahamian people and set the foundation for economic recovery,” Mr Watson said during his first press briefing at the Office of the Prime Minister yesterday.

“While working towards a substantive legislative agenda and policy priorities, the government will be completing board appointments for all 140 boards by next week Wednesday.

“Cabinet has been very active and busy going through that work.

“The government has also given a 90-day notice to overseas appointees to allow sufficient time for the winding up of ongoing affairs as a gesture of good faith in the interest of political maturity and government continuity.”

Mr Watson continued: “Prime Minister Davis has made it intentionally his mandate to allow the smooth transition to allow persons already in the office to continue working as they wind up their affairs so the business of The Bahamas internationally can continue and be transitioned smoothly.”

In its Speech from the Throne earlier this month, the new Davis administration promised to increase pensions for the elderly and raise benefits for the disabled community as a part of its plan to improve social assistance.

At the time the administration also reiterated its promises of a minimum wage increase, expanded social benefits and additional relief measures for storm impacted residents on Abaco, Grand Bahama and Ragged Island.

dont like the design behind him. The letters are to close to the edge of the display area and theres no need for them. as to the pic on the screen is.... its somewhat pretentious because NOBODY associates that image with "the office of the PM". A better visual presentation would have been an real not projected coat of arms on the wall. If you use images to relay meaning, make sure it has a meaning

Other than that VAT decrease, pension increase, board appts, diplomatic posts and setting legislative agenda... ok

Good job Clint. you're better at this than the other guy and Im sure youll get even better

Unless the unpredictability of where Covid will be is inputted whatever model is used as to where The Colony's VAT output will be by 2021 year-end and fed into arithmetic's for 2022 year-end and everything like that - tis but attempts at underestimating the fight that's still fueling the killer virus - something that continues to elude the globes top brains economists and health officials who have collectively failed at.
It's within reach, grasp and control of the new premiership of Comrade "Brave" Davis to act forthwith to order that face coverings be decreed mandatory across The Colony, — Yes?

My concern is that they get it done... been 5 weeks already. There is still an Emergency Order on the books... we will see.

Why the great delay? Why is Davis seeking so much time to make good on his single biggest and most well known election campaign promise? Is he seeking time to water-down or make many exceptions to his promise? Perhaps Davis is waiting on the IMF to publicly announce that his government has absolutely no choice but to increase the VAT rate from 12% to 20%.

Here's the simple wording of the legislation needed for Davis to do as he promised:

Effective 1st day of [insert month], 2021, the rate of value added tax that applies to all taxable commercial transactions involving goods and/or services shall be decreased from twelve percent (12%) to ten percent (10%).

Don't hold your breath waiting on parliament to act on this matter. LMAO

I'll believe it when I see it

Lowering VAT is not as simple as that. Just like it's talk of lifting the Emergency Orders. The PLP is good at talking, but not good at implementing the talking points. If this "talk" takes until next year and it flops, God helps us all. The IMF and OECD are watching the PLP closely

By "PLP" I take it you mean the Davis administration because most Bahamian voters have been going back and forth between supporting the PLP and FNM for more than two decades now. Their PLP today and FNM tomorrow mentality is killing our country given that there's very little difference between FNM and PLP political elite when it comes to corruption of the worst possible kind.