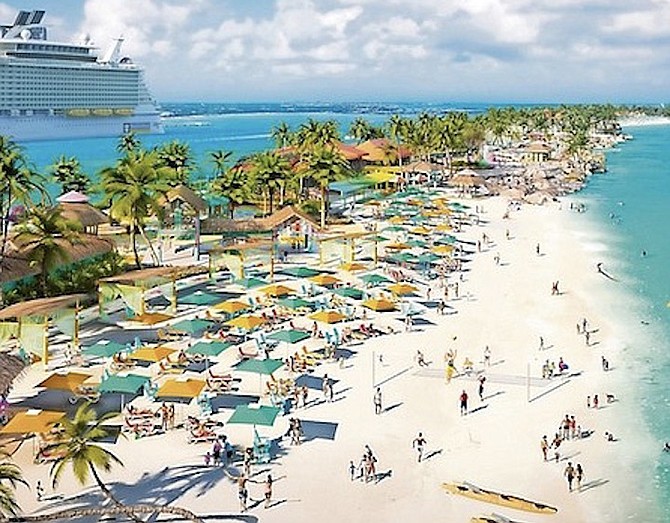 AN ARTIST’S impression of the Royal Caribbean resort.

SAVE the Bays has urged the Davis administration to keep a pre-election promise to cancel any agreement that would result in Royal Caribbean Cruise Lines leasing Crown land on Paradise Island.

Apart from one of the Progressive Liberal Party’s campaign pledges to place emphasis on environmental protection, Save the Bays (STB) reflected on a 2020 pledge in which Mr Davis said that if elected to government, his administration would stop any lease of Crown land by Royal Caribbean Cruise Lines (RCCL) on Paradise Island.

It was a declaration that attracted criticism from the Minnis administration when it was in office.

Yesterday, a government spokesperson said there was no comment on the matter.

In a statement, STB chairman Joseph Darville insisted that RCCL’s project in its current form would threaten serious irreparable damage to the surrounding environment on a number of levels.

“Save the Bays congratulates the new government and looks forward to working with the Davis administration to protect and preserve the invaluable natural heritage of our unique nation,” Mr Darville said.

“Leading up to the election, Mr Davis and his colleagues laid firm emphasis on environmental conservation, both in their manifesto and on the campaign trail. In due course, we hope to see these commitments become reality in the form of policy and legislation.

“One such commitment was Mr Davis’ firm pledge to terminate any agreement that would result in Royal Caribbean Cruise Lines (RCCL) leasing Crown land on Paradise Island.

“STB wholeheartedly supports the prime minister on this matter, and we fully trust that he will keep his word. We believe this proposed project in its current form would threaten serious irreparable harm to the surrounding environment on a number of levels. The western end of Paradise Island has always been a rare haven of natural beauty amid the bustle of Nassau Harbour – an area free of road, electricity and water infrastructure, where only low-impact development was ever allowed.

“Shattering this historic, pristine oasis with huge construction works, massive crowds, and the enormous volumes of solid waste and water pollution these will generate, is simply unthinkable. The threat of permanent harm to the underground water table, the nearby thriving reef and harbour-facing waterfront properties on New Providence is far too great.”

Mr Darville said STB thinks RCCL’s plans for environmental management are nowhere near sufficient given the level of risk such a project represents.

Insufficient or improper management just a few miles from the largest population centre in The Bahamas could create a serious pollution issue and potentially, even a health crisis, Mr Darville said.

He continued: “The tiny western end of Paradise Island simply cannot become a mega-tourism destination. Any further development of the area must be restricted to low-impact, small footprint boutique projects that showcase rather than destroy our country’s unique ecological heritage. This would be in keeping with the Davis administration’s stated aims for the future of the tourism industry and would also accord with the perspective of many environmental advocates, STB included.

“We thank Prime Minister Davis for recognising the danger posed by this project and urge him to move swiftly to make good on his promise.”

In 2020, it was reported that Mr Davis declared that a PLP government would cancel any lease granted to Royal Caribbean International (RCI) for Crown land to develop a beach club on the western tip of Paradise Island.

RCI had applied to the government for a Crown land lease, but Bahamian developer Toby Smith argues that he had previously got approval from the Minnis administration to lease a portion of the land in question. Mr Smith is currently locked in a legal battle with the government over the lease.

In March 2020, Mr Turnquest said until Mr Davis knew more about the details of the Royal Caribbean project he should have been reserved about the comments that he made.

“It is a regrettable statement that they would make,” Mr Turnquest told reporters, according to The Nassau Guardian.

“As we all know, the world is struggling for growth right now and so any confusion or concern that is expressed around these investments’ illegitimate concerns, is truly regrettable, as the minister of tourism would have said.

“I think the leader of the opposition should acquaint himself with the details of the project and until he has an opportunity to do that, I would just only suggest that he might want to be reserved about the comments that he makes.”

What's the unemployment rate over at Save The Bays? Exactly; rich do gooders trying to tell the rest of the people how not to live. No ideas on how to thrive, survive, exist, or even eat. Let them eat cake?

Say NO to RCL, YES to Toby Smith.

Water table damage? Is there really a viable water table on PI ?.Who knew.