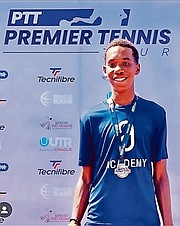 MICHAEL Major Jr, one of the top rising young Bahamian tennis players, participated in the Universal Tennis Tournament over the weekend in Fort Lauderdale, Florida.

Major Jr, the only Bahamian to participate in the event, got to the final of the men’s singles where he lost 6-4, 6-4 to American Jousha Sagaille, who at 23-years-old is eight years older than the 15-year-old Major Jr.