INSIGHT: After 50 years, what next for the FNM? 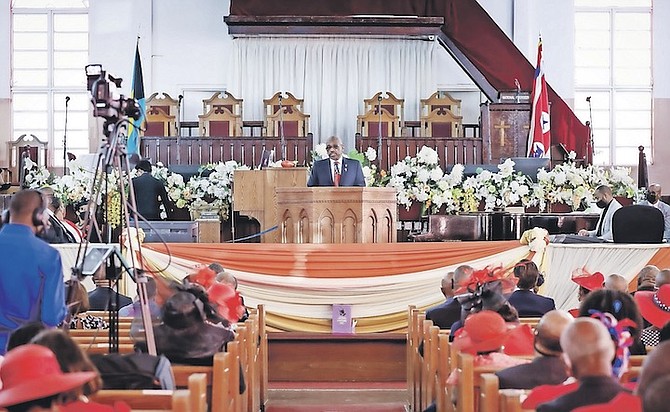 AFTER having just experienced one of the worst defeats in Bahamian political history, the Free National Movement is celebrating 50 years of existence and its membership is optimistic of a return to being a viable political force under new leadership.

In 1970 eight politicians walked away from the Progressive Liberal Party and became known as the “Dissident Eight”.

Cecil V. Wallace-Whitfield, Maurice Moore, Arthur A. Foulkes, Warren J. Levarity, James Shepherd, Curtis McMillan, George Thompson and Elwood Donaldson formed that group after disagreeing with certain practices of the PLP that seemed to go against the foundation that brought that party into majority rule in 1967.

On October 20, 1971, the “Dissident Eight”, along with other political allies, formed the Free National Movement and became a bold force in a time when it was unpopular and somewhat dangerous to go against former Prime Minister Lynden Pindling and his team.

Shortly after, the FNM’s Constitution, first platform, Declaration of Commitment; symbol, the torch; fanfare from “The Lion in the Winter” and the name, Free National Movement were settled and announced to the Bahamian people.

The FNM entered the 1972 general elections, with Kendal Isaacs as the party’s leader. The party was not successful and by the 1977 general elections, there was a break – the FNM under Cecil Wallace-Whitfield and the Bahamian Democratic Party led by J. Henry Bostwick.

By 1982, the FNM reunited and in that year’s general elections it captured 11 seats, including the first seat to be won by a female – Dame Janet Bostwick, Yamacraw.

In 1984 a report from a Commission of Inquiry into Drug Trafficking in The Bahamas, implicated many PLP supporters and government members, so the community felt the FNM would gain governance after the 1987 general elections.

Victory was not the case, so many people felt that “skulduggery” and voter fraud occurred resulting in only 17 of 49 seats being obtained by the FNM.

As the custom, Kendal Isaacs resigned as party leader following the 1987 elections, and Cecil Wallace-Whitfield became the leader, with Orville Turnquest as his deputy.

Hubert Ingraham had been fired as a PLP Cabinet Minister, but retained his Parliamentary seat in the 1987 elections as an Independent.

Sir Cecil Wallace Whitfield was battling cancer and in April 1990 Mr. Ingraham joined the FNM and when Sir Cecil died in May 1990, he was elected party leader.

On August 19, 1992 Mr Ingraham led the FNM to victory at the polls winning 32 of the 49 seats. And, the rest is history with FNM having four terms in governance – three under the leadership of Hubert Ingraham and one under Dr. Hubert Minnis.

After the party’s defeat at the polls on September 16, most party supporters had expected party leader Dr. Hubert Minnis to resign from his post. Instead he asked to stay on until the party’s November 27 convention.

Since his request was met, he has secretly called upon Council Members to support his bid to return as leader. He did not garner sufficient support and released a statement on Friday stating he will not offer himself as leader nor will he allow his name to be nominated

Even though he released a statement to that effect, some party supporters still believe he will try to offer himself as leader.

The Tribune spoke with hierarchy members of the FNM to see how they felt about their party 50 years later.

Former leader O.A. Tommy Turnquest, said the FNM has played a big role in the development of The Bahamas.

“The FNM has developed a rich legacy in its 50-year history,” Mr Turnquest said. “I considered it a privilege to have played a part in that time. I have served on the Central Council continuously since early 1982 and today sit as a life member.

“My role as President of the Torchbearers Association, Vice-Chairman of the Party, Member of Parliament and Senator for 20 years, Cabinet Minister for 13 of those years, and leader of the party from 2002 to 2005, has allowed me to witness the development of the party from the front row.

“As the son of a founding member, Sir Orville Turnquest, in order to create my own identity, I had to chart my own path within the party, fortunately with a supportive father, who allowed me to experience it my own way. I have experienced the peaks and the valleys, the joys and the pain, but throughout I have remained steadfast to serve as best as I can.”

“I laboured in Opposition with Sir Kendall Isaacs and Sir Cecil Wallace-Whitfield; and was proud to have been elected in 1992 with Hubert Ingraham as we euphorically ushered in “Government in the Sunshine”,” he said.

“Whether it was the development of Goodman’s Bay, the reversal of traffic on Bay and Shirley Streets, the building of the second bridge to Paradise Island, or the introduction of electronic monitoring of persons, I am proud to have played an integral part of an FNM Government over the years.”

He said the FNM afforded him the opportunity to serve his country in the political arena for over 25 years.

“It has played a significant role in my development, and as I continue to contribute to our country in other ways, I commend the FNM on its first 50 years, and admonish the Party to always look inward to its founding tenets and ideals and commit itself to the betterment of The Bahamas,” Mr. Turnquest said.

“The fact that Mr. Ingraham joined the party, adding other elements to the party, strengthened the base and went on to the historic election of August 19, 1992,” he said.

He, like other FNMs, look forward optimistically to the party’s future after rebuilding. He also spoke to reasons why the party suffered the recent defeat at the polls.

“The former prime minister has done the honourable thing and signalled his intention to not run at the next convention, having led the party into a defeat at the recent general elections,” he said. “The party looks forward to rejuvenation, new formation under whoever becomes leader. And, they look forward to victory at the next general election.

“The hurricane, the pandemic, the early calling of the election, the dislike for leader of the FNM and then defeat happened. This was not a victory for the PLP. It was a defeat of the FNM. The PLP should remember that because the numbers were not that great in the voter turnout.”

“Fifty years of service to the upliftment of our democracy and our people is worthy of note and celebration,” he said. Our founding fathers and mothers sacrificed much, including literally blood to ensure and secure the freedoms and system of elected governance we have today.

“As we embrace our future and the next fifty years, we remain grounded on these basic principles and continue working towards creating new opportunities for generational wealth creation, self-empowerment and spiritual fulfillment for each and every citizen and resident of our country.”

Sir Cecil Wallace-Whitfield resigned from PLP during a convention in 1970 and deemed himself, “free at last”. Key FNMs are now whispering those same words with their leader’s recent announcement that he will not offer himself at the party’s November 27 one-day convention.

Speaking on behalf of other Council members, a Tribune FNM source said the public should watch for the party’s transformation without Dr. Minnis at the helm.

“We are seeing the dawning of a new day in the FNM,” the Member said. “Not wanting to use a PLP slogan, but the FNM will soon see a new day in new leadership and party transformation.

“We were defeated at the polls, but now have an opportunity to fix our party, heal our party and come back to sink the PLP ship in 2026. We got good news recently with our leader saying he will not offer himself as a candidate for leadership in the November convention.

“He was the cause of our loss at the polls so he really should have not have considered running for leader. People are about to see the rebirth of the FNM – a party for the people, an innovative party, a party of modernization. FNM loading!”

“The FNM as a party and a government, has deepened democracy by opening the airwaves, giving Bahamians the opportunity to own and operate TV and radio stations,” he said. “Infrastructure was improved in The Bahamas, firstly in New Providence.

“There were challenges with the dump site, for many years. The FNM fixed that problem, making it an ecological park. The FNM has seen the needs of Bahamians and has corrected many outstanding challenges.

“On behalf of all the persons who have worked in the FNM party for many years, we would like to thank them, starting from the Dissident Eight. Those people would have had to struggle through discrimination and victimization by the PLP party.”

The FNM has a long way to go even to attempt resembling the party it was in 1992 when it made history punctuated by the winds and rains of a hurricane. But that’s another story.

The FNM party should be the last to talk about victimization. ask those senior police officers then ask Frank Smith and Shane Gibson and Simon just to name a few about victimization then ask the coconut vendors and all of the poor people who had to pay fines for going to the pump for water one minute past ten.

That Our Lucan deal and the BTC deal is a whole other disaster..