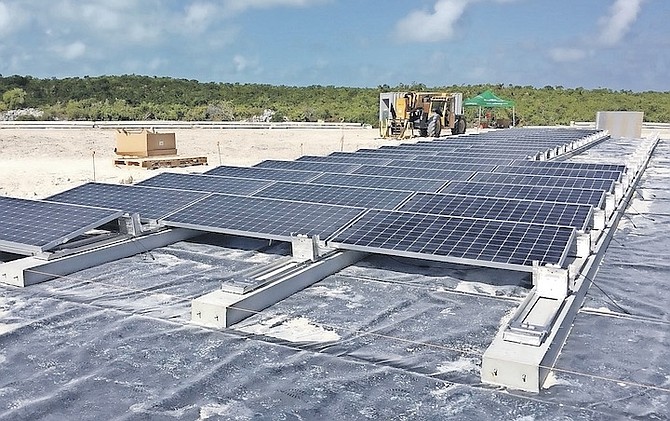 • And entered final round despite ranking as second-lowest

The winning bidder to develop Ragged Island’s $2m solar microgrid, on the same day it signed the deal with BPL, assigned all project rights to an entity that failed to make the final tender round.

Consultants hired by the Prime Minister’s Office described this as “concerning” in a report that detailed numerous flaws in the tendering process for a renewable energy solution designed to aid the Hurricane Irma-stricken island’s revival.

FTI Consulting, in a document seen by Tribune Business, also said there was no evidence to show the winning bidder, Canadian-based Tugliq Energy Company, had obtained the $400,000 performance bond to guarantee its performance within the stipulated ten-day timeframe following the contract’s signing.

The same applied to Salt Energy, the company to which Tugliq assigned 100 percent of the project rights. And the report also criticised the composition of the committee formed to evaluate the bids, arguing that it was “inconsistent with best practice” and may have breached Bahamas Power & Light’s (BPL) own policies and procedural requirements.

“The contract for the Ragged Island solar microgrid project was awarded to Tugliq Energy Company, which had during the RFP (request for proposal) phase but not the RFQ (request for qualification) phase, disclosed its intention to sub-contract some portion of the contract to Salt Energy,” the FTI Consulting report said.

“Salt had submitted qualifications during the RFQ phase, but was not invited to participate in the next phase. Nonetheless, BPL awarded the tender to Tugliq knowing that Salt would play a role in the project.

“More concerning was the fact that on July 19, 2019, the same day Tugliq signed its contract with BPL, Tugliq assigned the entirety of the contract to Salt in a separate agreement,” the report added. “Thus, Salt assumed the entire Ragged Island solar microgrid project despite the fact that BPL did not invite it to participate in the second phase of the tender.

“This raises concerns that Tugliq and Salt may have co-ordinated their tender participation in a manner not fully disclosed to BPL.” Besides concerns over bid manipulation, the FTI Consulting report also detailed contrasting explanations from BPL chairman, Dr Donovan Moxey, and chief executive, Whitney Heastie, over the utility’s decision to consent to Salt taking over the project.

The assignment had already been agreed between Charles Meier, Salt’s president, and Nicolas Seguin, one of Tugliq’s three shareholders, when Mr Heastie signed the deal on BPL’s behalf as a sole signatory on July 23, 2019, some four days later.

“When asked about the assignment letter during the course of an interview, Heastie said that he was not in the approval chain but was aware of the assignment and recalled that it was presented to the Board, which approved it,” FTI Consulting’s report said.

“However, FTI found no references to the assignment in the Board meeting minutes. In addition, Moxey said he was not familiar with the contract assignment or the circumstances surrounding it.”

FTI Consulting added that the Tugliq/Salt contract was discussed at BPL’s July 26, 2019, Board meeting. Burlington Strachan, BPL’s head of grid solutions and a 40-year veteran with the utility, informed the Board that the contract had been awarded to Tugliq on an “engineering, procurement and construction (EPC)” basis despite Salt taking over all rights to the project one week before.

“Strachan also informed the Board that BPL had received $2.5m in government funding for the Ragged Island solar microgrid project,” the report added. With Bahamians facing a double exposure as BPL customers and taxpayers, FTI Consulting sought an explanation from Mr Strachan as to “the rationale for the assignment” to Salt.

“Strachan believed that Tugliq was primarily interested in the independent power producer (IPP) option, and did not have much interest in the EPC option,” the report detailed. “He described Tugliq as more of an IPP-focused company, with Salt being more of an EPC-focused company.

“Therefore, when Tugliq was selected as the winner of the EPC contract, it decided to forego the entirety of the contract in favour of Salt. It remains unclear why Tugliq would have submitted an EPC proposal in the first place if this option was not of interest to it.”

Bidders were allowed to submit different types of solutions for Ragged Island’s energy needs. The initial RFQ phase, designed to separate serious, qualified bids from the also-rans, saw Tugliq fare poorly on both the EOC and BOOTT (build, own, operate, transfer and train) submissions, finishing second-last in both categories.

Salt did not even make it to the RFP phase, with Tugliq’s partner in the the prior round identified as fellow Canadian renewable energy distributor, Rematek Energie. The latter, of course, would eventually be ditched.

Four final bids were eventually received in the RFP round. Tugliq submitted both EPC and IPP solutions, while ABB offered an EPC proposal and NantEnergy an IPP structure. However, FTI Consulting identified “discrepancies” between the criteria used to evaluate EPC and IPP bids, with the former requiring “fewer items” and less details.

Tugliq’s EPC proposal scored highest due to the experience of its then-proposed sub-contractors, SMA Sunbelt, Salt and Grand Bahama-based Waugh Construction. Both Salt and SMA Sunbelt had initially been standalone participants in the process, but ultimately threw in their lot with Tugliq.

“In further reviewing Tugliq’s bid documents, FTI observed that its technical proposal was prepared by SMA Sunbelt and provided to Tugliq on June 6, 2019, one day before the RFP deadline,” the report said. “An attached cover letter from SMA Sunbelt indicated that it was drafted in response to a request from Tugliq.”

FTI Consulting said there were also discrepancies between Tugliq’s offer and the bid requirements. Whereas the battery system was supposed to be located 1.6 miles from BPL’s existing Ragged Island site, the Tugliq proposal called for it to be placed at the latter location.

And, instead of a minimum energy storage capacity of 1,260 kilowatt hours (kWh), and minimum AC output of 300 kW (kilowatts), the Tugliq offer proposed a capacity of 1,200 kWh and output of 216 kW. Still, the final contract with BPL stipulated a $2.9326m “base price” with Tugliq to receive $1.609m, or 55 percent, of this sum as a mobilisation payment upon signing.

The bids were evaluated by Mr Strachan and three persons from the Rocky Mountain Institute, a non-profit that specialises in renewable energy. The FTI Consulting report said this may have violated BPL policies by not being sufficiently diverse and failing to include persons from “disinterested” departments, such as procurement or finance.

“A theme that emerged during the course of FTI’s review was a general failure by BPL to abide by policies and procedures,” the consultants concluded.

Comrades, could this very well be, exactly why The Colony's leading Therapist to the Royals has been willing to comment on why you shouldn't just be popping up even more crazy stuff to go along with everything done crazy like this and that. — Yes?

"When asked about the assignment letter during the course of an interview, Heastie said that he was not in the approval chain but was aware of the assignment and recalled that it was presented to the Board, which approved it,” FTI Consulting’s report said.

“However, FTI found no references to the assignment in the Board meeting minutes. In addition, Moxey said he was not familiar with the contract assignment or the circumstances surrounding it.”

Comrade Fish Catchers 'BoBo’ and Toogie' and now sprungs up Ragged Island’s 'Tugliq and Salt' and everything like this and that. — Yes?

99.9% of the corruption appears to be happening through contracts

Maybe they sub contracted to Oban and moved on to build domes instead.

They spent 6 million to build 100 domes?

It almost impossible outright tief from the government (and get away with it), that is without the voluntary turning away of heads and everything else and sometin' like that, - Yes?

“ It almost impossible outright tief from the government (and get away with it), that is without the voluntary turning away of heads and everything else and sometin' like that, - Yes?”

@tal, wid Shame back on board given his expertise in dat area, actually- NO

I would like to know who are the beneficial owners/shareholders of the said companies awarded these bids. Why do I have a feeling we may find at the end of the dig for beneficial owners sitting Board members.

If you don't laugh at what goes on in this country, you will cry. At this point, I really don't expect any better so I just take it in stride. Business as usual.