‘Why We’Re Getting Our Vaccinations’

CONCERNED about the nation’s climbing COVID-19 death toll, Steven Larrimore decided to get his first dose of the Pfizer vaccine yesterday.

He was among several people who spoke with The Tribune at the Kendal G L Isaacs National Gymnasium after getting the jab.

Scenes at the vaccination site were much quieter when compared to previous weeks, which saw hundreds flock to the centre, especially due to "diminishing" vaccine supplies at the time as well as for other reasons.

Yesterday, Mr Larrimore said his decision to get vaccinated was driven by several factors, but mostly by his need to protect himself and his family.

“Well, my daughter would tell me ‘oh, you need to get your shot’ and then by my wife’s place, I had some co-workers saying ‘oh, they done get their shot and who ain’t get their shot too bad’ and they was throwing jabs,” he said yesterday.

“So I decided and I was thinking about it (for a) long time because I saw on the news how so many people (were) dying. At first, I was saying that I didn’t know it was that serious, but then I said, ‘oh this thing sounds serious’ and I said let me take this.”

However, getting vaccinated did not come without its fears.

“I was thinking to myself that it might do more harm than good, but then I said to myself, I’m an athlete and plus I trust in the Lord so it can’t hurt me so I wasn’t even worrying about that,” Mr Larrimore said.

More than 640 people have died from COVID-19 to date, according to the Ministry of Health.

One woman, who asked to remain anonymous, told The Tribune at the vaccination centre yesterday that she lost two sisters to the virus in the span of one month.

She said that neither was vaccinated, adding that their unexpected deaths motivated her to get the shot.

“I have two sisters who died from COVID, one in August and the next in September,” the 64-year-old woman said when asked why she wanted to get vaccinated. “It was rough and you know you never get used to death and then I work in the area where I mix with a lot of people so I decided to get it."

The 64-year-old said like many other Bahamians, she too was at first hesitant to take the jab.

“People had all kinds of things on Facebook and all kinds of fake news and stuff, but then when you get the full information, you understand for yourself and then you decide the best thing to do,” she said. "I wish my kids would get it, but they haven't decided yet."

Asked for her advice to people who may still harbour fears about taking the vaccine, she said: “I think they should get it to be (on) the safe side, because people been losing two and three people in the same family so I think if you get it, it would be all right.” 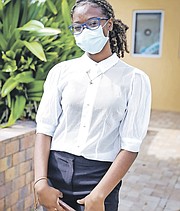 18-year-old Kelsie Gibson urged other young people to not worry too much about side effects. Photo: Racardo Thomas/Tribune Staff

Similar sentiments were also shared by 18-year-old Kelsie Gibson, who advised youngsters to not become overly concerned about the side effects.

“There are side effects, but it’s not as bad as people say it is so it’s a good idea to keep you safe and also your family safe,” she said.

“This is my second shot and I feel good. I feel protected and you could catch it, but I know that I have the medicine in me to keep me.”

Meanwhile, 13-year-old Tamarvin Edgecombe, who took his first shot yesterday, added: “I was hesitant and…I was kind of nervous and then after I take it, it was like ‘oh, that’s was nothing.’”

He also encouraged others to get vaccinated, saying “just take it and try to be safe.”

However, for some, the decision to get vaccinated was not due to fears of contracting the virus.

One woman, who asked for her name to be withheld, gave this reason for getting the shot: “Mainly, to travel, but other jobs (are) requesting fully vaccinated people so that was probably a reason too.”

According to the government’s latest vaccine tracker, 127,567 people in The Bahamas are fully vaccinated against the virus while 132,240 people have received at least one vaccine dose, not including Johnson & Johnson.

What a very sad story. Young children now are guinea pigs. So the new rule in medicine is that all drug side effects happen in 30 days? LOL

Sad story? It is much, much more sad when someone dies of Covid and isn't vaccinated. The fact that is still happening is truly sad. Your odds of dying from Covid are significantly higher when unvaccinated than if you were vaccinated. From that fact alone, the decision to get the vaccine is fairly simple.

not so, vaccinated are dying from it, but the catch is if you have not passed the 2 weeks period they are saying you are not fully vaccinated.

you are not fully vax until 2 weeks after your second shot, is the catch.

Just curious as to whether these centers are obtaining legal consent from the parent/guardians of these young people not at the age of majority. Does anyone know?

you are supposed to have your parents consent and signature. I am told regardless you have to sign a waiver when taking the vax.

"Vaccine effectiveness of BNT162b2 against infection waned progressively from 92% .....and from day 211 and onwards no effectiveness could be detected"

"effectiveness of ChAdOx1 nCoV-19 was generally lower and waned faster, with no effectiveness detected from day 121 and onwards"