Govt Unsure If It Will Carry On With Abaco Domes Plan 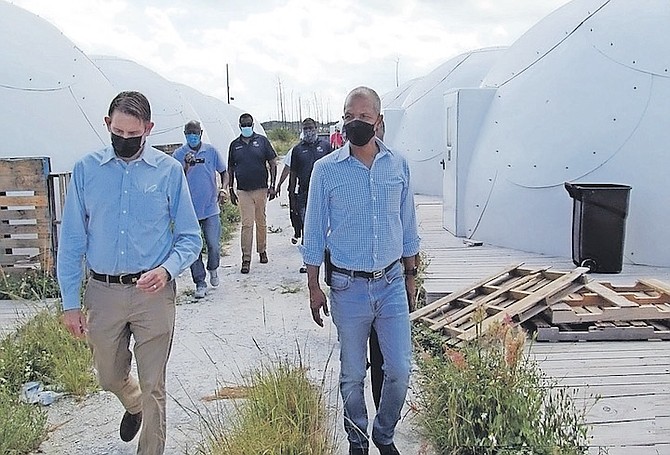 MYLES LARODA, Minister of State in the Office of the Prime Minister, inspecting the domes.

MYLES Laroda, State Minister in the Office of the Prime Minister, who has responsibility for disaster management, said the government has not decided if it will continue with the temporary dome housing project in Abaco.

He said there have been a lot of complaints expressed about the initiative by residents.

“I visited Abaco last week Thursday and Friday and inspected firsthand and there seems to be a lot of challenges there with the domes,” Mr Laroda said.

“There are complaints that the domes are not attached to the foundation. As for where the government goes, that’s going to be a Cabinet decision. I don’t have anything definite on that, but I know the challenges of those people who were residing in those domes.”

Following Hurricane Dorian’s destruction in 2019, many residents in Abaco and Grand Bahama found themselves without homes.

As a temporary housing solution, the National Emergency Management Agency budgeted $6.4m for temporary domes, with an estimated $4m committed to cost.

Since the initiative was launched, more than 100 domes have been erected in Abaco and Grand Bahama. In June, Katherine Forbes-Smith, then-DRA managing director, said another 100 structures were still waiting to be erected.

Asked yesterday if he planned to recommend to Cabinet that the project continue, Mr Laroda replied: “Based on my conversations with my employees at the DRA, those domes were really supposed to be a stop gap measure, maybe for a year and a half until affordable housing could be replaced. What I saw on the ground physically, I don’t see how those domes could be a permanent solution to the housing needs.”

This comes as several of the DRA’s initiatives are currently being reviewed by the new administration.

Asked about his findings thus far, Mr Laroda said officials have found that some projects are progressing better than others.

“Yeah, there are some things that are working better than others,” he said before a Cabinet meeting yesterday. “I viewed the dump sites in Green Turtle Cay and also in the mainland in Marsh Harbour. With regards to some of the other out islands, Moore’s Island in particular, the hurricane really ravaged that island.

“The dock that was there, the public dock was actually rebuilt by the residents of Moore’s Island using reclaimed wood and reclaimed nails. The airport is not functioning. As a matter of fact, the windows are broken and I use this term, this is what it is ‘clinic in a can’ that has the foundation, but Moore’s Island is in a dire state and the people there were just happy to see us.”

As for his thoughts on the former administration’s response to Hurricane Dorian, the state minister said: “I’m scheduled to go to Grand Bahama on Thursday this week and I’ll review what’s on the ground in (Grand Bahama) myself. With regards to Abaco, going to Moore’s Island, Marsh Harbour, Green Turtle Cay and also to Hope Town, what was conveyed to me was that all of the help received by those residents in those areas were from NGOs.”

Dorian hit Abaco on September 1, 2019 as a Category 5 hurricane before barreling toward Grand Bahama. The estimated cost of the storm’s impact on The Bahamas is said to be some $3.4 billion.