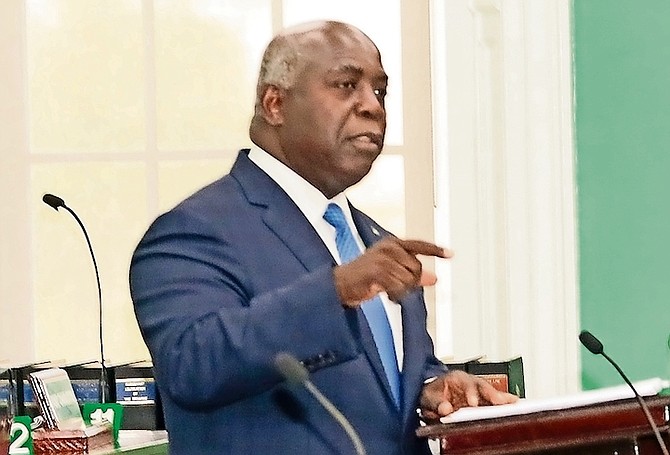 AS he declared his administration’s plan to steer the country out of crisis, Prime Minister Philip “Brave” Davis said the government is faced with a $1 billion difference between numbers provided by the previous administration’s pre-election report and the true state of government liabilities.

As he presented the 2021-2022 supplementary budget statement, Mr Davis revealed several findings by his administration since taking office following the September 16 general election.

Perhaps the most eyebrow raising of all his revelations yesterday was the apparent $1bn difference in the former Free National Movement government’s pre-election report and the country’s actual liabilities.

Mr Davis also told the House of Assembly of the possibility that electricity bills could increase by as much as 20 percent due to delays with the rate reduction bond for Bahamas Power and Light under the previous government.

He said there was also poor planning and management of a $100m World Bank Hospital loan among other things.

Mr Davis said: “As the minister of finance, I requested upon coming to office a full accounting of the government’s fiscal position. To this end, a renowned accounting firm has been reviewing information provided by the Ministry of Finance with respect to liabilities of the government as of 30th September 2021, which is approximately one month following the issuance of the pre-election report.

The opposition Free National Movement yesterday denied that the pre-election fiscal report did not comply with the law and suggested the prime minister’s statements were misleading and lacked proper context.

Mr Davis accused the former government of excluding over $100 million of contracts executed by the Ministry of Works, for which no funding was provided in the budget. There were also other exclusions, he said.

“It (the pre-election report) omits under-funding of pension and gratuity payments for public officers, which is now being addressed in this supplementary budget. The pre-election report omitted a loan assumed by the government for which the only source of payment is BPL, an entity with significant financial challenges.

“It excludes amounts owing for taxes for a star witness in a criminal case of a former Cabinet minister. This very unusual arrangement is supported by a promissory note signed by a senior official of the Ministry of Finance. It excludes court judgements made against the government, for which funding now has to be provided in this supplemental budget. It makes no mention of potential liabilities emanating from contract breaches committed by the former administration.”

The prime minister said once he receives a final report, it will be presented to the House of Assembly. But he noted that not all of these obligations can be accommodated within the existing framework.

Regarding a plan for economic recovery, Mr Davis said a private sector debt advisory committee would be formed to advise on the nation’s debt.

The committee will be chaired by James Smith, the former minister of state for finance, and will have representatives from domestic as well as international financial institutions based in The Bahamas.

To assist the work of the committee, the government will engage an independent international debt advisory firm.

He added: “The government will implement our Blueprint for Change and grow the Bahamian economy at a more rapid rate than described in current growth projections.

“Let me tell you how: We will increase the level of public investment through a combination of direct government expenditure and public private partnership.

“We will create a Sovereign Wealth Fund to monetise the concessionary access to Crown land and seabed leases already provided to foreign investors. We will create a National Wealth Fund to hold the government’s equity in various commercial enterprises. The book value of the government’s various equity investments exceeds $1 billion but the annual return is currently less than 1 percent. This is clearly not acceptable.

“We will make The Bahamas 5G ready through the establishment of a national fibre network. Government support is necessary to achieve 5G connectivity in the medium term. Without world-class communications infrastructure, the country’s growth potential is stunted.

“We will retain a greater share of foreign currency earnings by increasing the amount of renewable energy produced and consumed in The Bahamas and reducing fuel imports for power generation. We will increase the proportion of government expenditure allocated to small and medium businesses by amending the Procurement Act to protect local businesses against unfair competition. We will stimulate domestic demand by providing incentives for investment by the Bahamian diaspora in the second home market in the Family Islands.

“These are only some of the steps we intend to take to increase growth in the medium term, recognising revenue growth alone is insufficient to address the current debt situation.”

The government also intends to achieve a revenue-to-GDP target ratio of 25 percent by the end of its first five-year term in office.

“At the time of the mid-year budget, we will present further details of our tax adjustment strategies, which will be implemented in upcoming fiscal cycles. However, the path to restoring our fiscal health begins today with the re-establishment of a fully resourced Revenue Enhancement Unit, whose purpose is to increase the tax base by minimising tax avoidance and fraud.

“Within 24 months, we expect that this unit will account for $200m in additional taxes,” Mr Davis said.

So we are $1 billion worse then we thought and we have not enacted any major revenue programs or expense reduction programs to pay for this. I reckon IMF maybe starting to book their tickets and hotel stay soon.

Regarding a plan for economic recovery, Mr Davis said a private sector debt advisory committee would be formed to advise on the nation’s debt.

The committee will be chaired by JAMES SMITH, the former minister of state for finance, and will have representatives from domestic as well as international financial institutions based in The Bahamas.

Of all people, JAMES SMITH !!!! Is Davis for real ???!!! He knows full well that this guy was very instrumental in charting the course of our country's financial demise under past PLP administrations. Besides, it's generally known Smith has for years now been nothing but a puppet and tool of both his controversial Greek master and his kingpin numbers boss.

Davis must be kidding with this appointment. If not, he has just officially sealed his political fate as "ONE AND DONE". LMAO

Why doesn't he name the "renowned" accounting firm so we can all know which one of them has prostituted itself?

Is Davis unable to name this accounting firm because it insisted in the contract for services signed by Davis's government sign that it's name not not be divulged to the public without its prior written consent? Is the accounting firm ashamed for it to be publicly known that it has undertaken such services for the Davis government? LMAO

Davis said, "We will increase the level of public investment through a combination of direct government expenditure and public private partnership."

Doesn't Davis know that we all know "a combination of direct government expenditure and public private partnership" is nothing but code for the politically elite ensuring that they themselves, their financial backers and their favoured cronies get unjustly enriched at the great expense of everyone else in our country?

Man you are spot on. I really expected more out of Davis and his crew.The bn $ story is nothing more than a distraction. Bwave know Bahamians are easily distracted. He float the story without any evidence or context and I guarantee we will never see the evidence. BAIT AND SWITCH SHAMEFUL

He's creating a debt so that when he and his cronies steal what they can, they can say it was already gone.

I'll wait to hear more but meanwhile, i find it curious that while an additional $1.0billion of debt is announced on top of an already high national debt, pension increases, promotions for govt workers and reductiob in VAT is also announced. That doesnt add up to me...