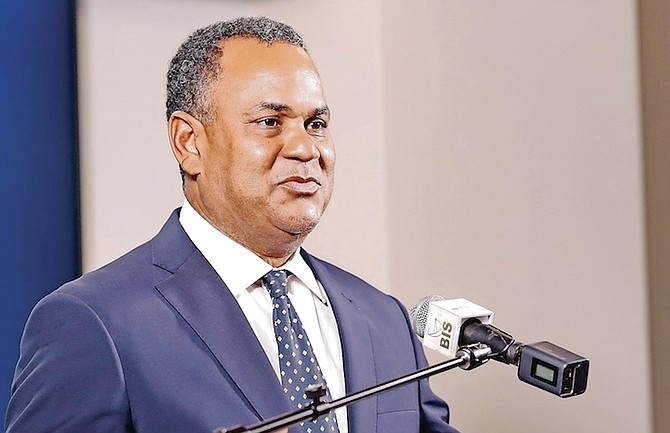 “This is a sensitive topic,” he said during the Office of the Prime Minister’s press conference yesterday.

“We grappled with this when we first implemented VAT and we grapple with it now. All the studies will tell you, any studies that are done, (say) have one rate, preferably a low rate, minimum exemptions; it’s easier to administer, it reduces the possibility of leakage, you collect your revenue, revenue administration is much better, you get more revenue to enable you to do other things. It is not something that is taken lightly. We believe it’s the right decision.”

In 2017, before the Minnis administration zero-rated some items, the International Monetary Fund said The Bahamas had the most productive VAT regime in the Caribbean. The IMF consistently said the country should resist efforts to enact exemptions.

Mr Halkitis said: “Overall, you are reducing the rate from 12 to ten so everything else, every other thing you spend money on, instead of paying 12 percent VAT, you’re now paying ten, so that’s a reduction. The Department of Statistics does a study called the household expenditure survey and they say the people at the lowest income level spend about 25 percent of their income or their spending is spent on food so 75 percent goes on something else, so the 75 percent that goes on something else that’s VAT-able, they’re going down from 12 to 10, from the items that were on the breadbasket items and are now zero-rated, there will be a ten percent VAT.

“We understand it is an emotional issue, we know that it gets to be a very hot political issue, but our job is to do what’s in the best interest of the country and we believe this decision is and we will be seeking to explain it more as we go along and ask the Bahamian public to give us an opportunity to let this work and they will see the benefit of it.”

Earlier this year, the Progressive Liberal Party said it would reduce VAT to ten percent for just one year, then re-evaluate the country’s fiscal situation. Mr Halkitis, however, said yesterday that VAT will remain at ten percent.

“We don’t expect that we have to go back to 12 percent next year,” he said. “I think we have taken it out of our plan and in our plan it says ten and we are prepared to go with ten. We’ve done an economic model, I think the prime minister has undertaken to table it in the House of Assembly, where we’ve asked some experts to do some scenario analysis, what will happen if this happens, xyz happens and they gave us a report.”

Mr Halkitis said the ten percent VAT rate will apply to most items that are now zero-rated.

“I know…people will be concerned about will these things go up, particularly when you deal with insurance and it’s time to claim it’s better to have no exemptions and anybody who needs the direct assistance you give it to them, so we’re getting rid of all the zero ratings and exemptions except for some selected ones and electricity,” he said.

“The recent stated proposal by the government to reverse that policy and restore VAT on breadbasket items would be a paralysing burden on the backs of the poor, the most vulnerable and thousands of Bahamians struggling to make ends meet, including thousands in the St Barnabas constituency,” he said.

“To take away this much needed relief directly from Bahamian consumers would only increase hardships and force undue pressure on an already challenged social service safety net. While the government looks to make up its revenue shortfall with its new proposed tax policy it ought not be done at the expense of the underserved in our society, the disenfranchised and those Bahamians that need relief the most,” he said.

Prime Minister Philip “Brave” Davis has said the anticipated VAT reduction to ten percent should be in place by January 1, 2022.

Not entirely correct. Whilst it may be a best practice the other side of the world (New Zealand), the European Union has a reduced VAT rate on food (generally around 5.5% compared to the normal rate of around 20%), the UK has a zero rate on food and of course the USA doesn't have VAT,

In fact in Florida, there is no tax charged on food items.

Same in California, no sales tax on food.

Our economy is too small for VAT exemptions. But it's the purpose that the VAT is being used for that is troubling. Also, VAT by itself cannot save the economy. Better spending practices and reducing the size of Govt must go hand in hand with the VAT. Else we are still in the same debt situation as before VAT.

Best practice? Wow, this is crazy. You are taxing the people wjom voted you in. Why did you guys not mention that you wete going to put VAT on breadbasket items? I really dont think you would have gotten all those votes. I do not like jow you guys swung us in regards to the 10% decrease. We tjougjt it meant 10% decrease and not an added tax. You decreased by 2% on some items and.increased to 10% on other items. This is tricky.

You really expected something different from the people who introduced this regressive VAT? Old heads don't have new ideas

They don't come much dumber nor with a much browner nose. LMAO

How can he keep a straight face and say that the lowest income people will spend 75% of their income on items that will now be 10% when he knows that the largest item in that is rent and that is not Vatable. then there is BPL which under $200 is not Vatable. He knows it will increase the expenses. I do agree the new regime is easier to process and will lead to more revenue, but stop lying about the effect on the lowest earners. Also if one of the reasons for the increase to 12% was for the exemptions, then bring it back to 7.5% without the exemptions.

@Dawes: Your last sentence should ring loud bells in Davis's ears given all of the huffing and puffing he did when vociferously opposing the VAT rate being increased from 7.5% to 12% by the Minnis-led government. Back then Davis was so angry about Minnis's VAT rate increase that he almost turned as red as an FNM supporters red 'T'-shirt while ranting, raving and jumping up and down on the floor of the house of assembly.

The point is that best practice or not, usually it's not accompanied by a vat reduction in the face of overwhelming government debt...

A 2% discount on all of economy is not balanced by a 10% VAT on bread basket items that have almost no value added...Imagine if you were running restaurant and you said hey let's cut the price on all menu items but start charging for the paper napkins...you can bet you'll lose money....

SHUSH. I WENT TO A PICKUP RESTAURANT AND ASKED FOR AN EXTRA NAPKIN AND FORK SO WE COULD SHARE.

THEY SAID IT WAS AN EXTRA QUARTER.

Many of us not on the government's bloated payroll or one of its many 'gravy trains' at the taxpayers' expense really don't have a problem with less taxes ending up in a very corrupt government's hands to squander. Think of more taxes for a government rife with corruption as being essentially similar to pouring gasoline on a raging fire in an effort to put it out.

The only real fix is major government reform aimed at stamping out as much of the corruption as possible before introducing a progessive income/capital gains tax regime that would ensure the wealthy among us pay their fair share of our country's true tax needs as determined after stripping most of the rampant corruption out of the government sector.

Hahahahahahahaha. . .you do jest? The PLP "stamping-out" corruption? That is like saying: "find a bull with tits". . .THAT'S WHAT MOST OF THEM ARE. . .CORRUPT FOLKS!!

Problem with that fix is one - equivalent to pushing a elephant up hill while dragging a rhinoceros behind you. Without efficiency in government you breed corruption. Ultimately government has to 'work' then the need to 'grease the wheels' is less likely...Creating income tax in a renown tax haven is a disaster too... FDI investment will capitulate... You have to face facts - Bahamas is a place in the sun for shady people... That said there is no reason why we can't develop alternative income streams without alienating existing cash flow..

Right now, the IMF, IDB, World Bank and others like them are calling most of the shots behind the scenes knowing that they hold a winning hand and that at the end of the day the Bahamian people are going to pay a dear price for having tolerated so much government corruption for decades.

The irony is, much of the government corruption that has left our country financially crippled was actually encouraged, endorsed and facilitated by these same alphabet soup global agencies on behalf of the predatory constituents they represent who are akin to greedy vultures circling over us as they wait to feast on our country once it is declared dead by the IMF. They kept putting their lending teat ("tit") to the hard sucking lips of our known corrupt politicians while knowing all along what the ultimate outcome would be for our small nation.

In short, we've allowed ourselves to fall victim to the classic Milton Friedman model that for decades has been used by the larger state governments and the wealthy corporate interests they represent to facilitate the raping, pillaging and plundering of the natural resources of smaller states, including their source of cheap downtrodden labour.

The FNM representative voted for a 60% increase. on VAT but the people voted for him instead of the brilliant man son of the soil from Cat Island.

So says @birdie who is the polar opposite of @Topdude. LMAO

Man. . .yinna as lost as Gus who "gone to Cocoa Hole" and can't come back or "Jerry Rocker" whom nobody can find!! What da hell yinna talking about with this "thing" I hear you and Davis them talking about!! How to figure that thing out nah!! Ya know yinna een making no sense with that explaination aye?

IS this the University of Wulff Road voodo maths?

Halkitis and the other well greased PLPs don't care about the poor Bahamians. They only talk to hear themselves, but do very little to help.

I think this government is L.O.S.T! But. . .if they can "stick with" they plans to increase incomes for the middle class and the poor!! This "thing" may just have a better outcome!! But. . .if they come out like they talking now. . .THIS MAY BE OUR FIRST COUP!! These people them ger riot!!

VAT on school fees, medicine, rent and them things for caring for the sick and infirm. . ."WE GER DEAD"!!