‘Progress Being Made’ To Rebuild After Dorian 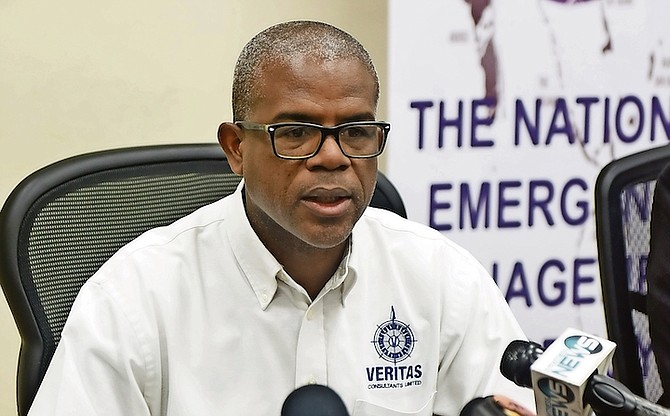 THE chairman of the Disaster Reconstruction Authority says while work is moving slowly, progress is being made to rebuild storm torn communities in Grand Bahama and Abaco.

John Michael Clarke spoke to The Tribune yesterday, on the eve of the second anniversary of Hurricane Dorian’s landfall in The Bahamas. The monster storm touched down on Abaco on September 1, 2019 as a Category 5 hurricane before barreling toward Grand Bahama. It left massive devastation and death in its wake.

He said the DRA is just moving out of the recovery phase of the disaster and conceded that reconstruction has not yet begun in earnest.

“There are two ways to look at this,” he said. “If you are driving in a car and the car can only go five miles per hour, you’re driving at a slow rate, but because you are in the car, you are making progress. If you’re waiting on that person who’s driving the car to bring something that you need urgently, they will be driving too slowly for you.

“So on one hand it is quite possible for you to be making progress, but at the same time that progress, unfortunately, may not be at the rate that is required to let the end users feel satisfied about it. It is not unique to this disaster.

“Reconstruction has not been done in earnest as yet. It isn’t a case where you say, ‘Well it’s been two years and reconstruction is at this point.’ Reconstruction can take us as long as we as a country are able to commit the time and resources in building back a more resilient Grand Bahama and Abaco.”

The DRA chairman said the groundwork has been laid for reconstruction to take place, but how long will that effort actually last will depend on a number of factors.

“As far as reconstruction works, the DRA started with working with some recovery projects and the primary projects were temporary housing which was the dome and small home repairs programme and modular homes in Sweeting’s Cay,” he said. “The domes and modular housing were temporary housing solutions and they were not reconstruction project solutions. They were solutions put in place to help people get to a point to reconstruct their homes.

“The small home repair projects were for those who had moderately and minor damaged homes to get to a place of restoration. So those projects were recovery projects.

“Then you had the big recovery project and that was debris management and clean up. Last year we finished following the Department of Environmental Health Services and the Ministry of Works, we completed the community clean up … all the roads and streets. We set up a debris management site and we put contractors on the site to continuously manage the debris.”

This, the chairman said, was done throughout the mainland both in Abaco and Grand Bahama and in the cays. He said the debris on those sites measured some 3.5 million cubic yards and had to be sorted and reduced so that project was extended another 12 to 24 months.

“Another recovery project would have been schools done through the Ministries of Works and Education, the restoration at the Rand Memorial Hospital – the $21 million that was spent in that restoration effort – the minor repairs to the clinics and medical facilities throughout Grand Bahama and Abaco,” he said.

“We are in the process of doing some marine clean up and then of course the Small Business Development Centre provided economic assistance to small businesses in both Abaco and Grand Bahama.

“The recovery and the way to recovery in these two islands is facilitated by the exigency orders that the government put in place since the passage of Hurricane Dorian where the disaster zones remain duty-free and VAT-free.”

He also mentioned the $3m Abaco centre which is expected to be the standard for all storm shelters locally. Outside of hurricanes, this building is set to be a community centre. Premier Importers is the developer of the Abaco Centre and the general contractor is FDS Construction.

He said he expects the contractor will begin the foundation for the centre this month.

Aside from the Abaco Centre, there is also the Central Pines housing development where the DRA is building houses in increments of five. The first five houses are currently under construction and scheduled to be completed sometime between September and October. This project is being funded by donors.

Tell me how many Domes have been constructed in East End. After all hundreds of thousands was paid for them, but, when I ride that way I can't find the construction site or the village.

Based on all of the pictures I've seen published by government (none) and the incredible amount of boasting government had done regarding works completed (none) I think it is safe to assume that very little has in fact been done. All that has been done that I know of / have seen pictures of is: - removal of debris - construction of one temporary dome.

That's it!!!! I still haven't see any blueprints of how Marsh Harbour will be redesigned / laid out in the redevelopment. Seems like the plan is to rebuild exactly how it was.

No round of applause for that.