Quarantined will be allowed to cast vote 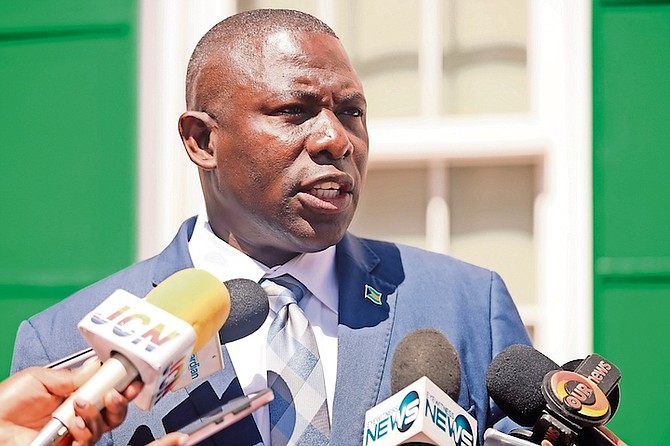 MINISTER of Health Renward Wells has confirmed the government will not prevent people in quarantine from voting in next week’s general election, suggesting that doing so could result in several legal issues for the Minnis administration.

His comments came after weeks of concern that people in quarantine or those who have COVID-19 would not be allowed to vote based on statements made by members of the government.

Last week, National Security Minister Marvin Dames suggested quarantined people will not be allowed to take part in the election.

However, when asked about the government’s stance on the matter yesterday, Mr Wells said every voter will be allowed to exercise their right, including those in quarantine.

Though, he did not clarify how such people will be able to vote on September 16.

“To prevent folks (from voting), there’s some constitutional issues I believe, legal issues around all of that and at the end of the day, folks are going to find a way to exercise their democratic right,” Mr Wells reporters at C V Bethel Senior High School where scores of people gathered to cast an early vote in the advanced poll.

“The government of The Bahamas and let me say this, in the United States, during the US election, the CDC had put out some guidelines and they said whether you’re COVID positive or whether you’re in quarantine, you can go out to vote in the American elections but the point is that you treat everyone who comes to the poll as if they’re COVID positive, so all Americans were allowed to vote and I think we’re taking that same model but we are putting even more stringent guidelines inside the polls.”

This comes after the Progressive Liberal Party wrote to acting Parliamentary Commissioner Lavado Duncanson to confirm whether registered voters will be prevented from voting in the next election if they are quarantined or suffering from COVID-19.

He said the letter was “in anticipation of litigation” and if the appeal to patriotism did not succeed, the party would commence “expeditious prosecution of court proceedings” against Mr Duncanson.

However, with quarantine people now allowed to vote, the move will likely raise safety concerns about voting on Election Day especially at a time when COVID-19 cases and virus-related hospitalisations are surging.

Yesterday, Mr Wells said officials will implement strict protocols inside the polls to ensure voters’ safety but did not say how officials plan to minimise spread for those waiting outside the polling stations.

Advanced polling stations were plagued by long lines yesterday, with little to no social distancing seen in many instances.

Yesterday, Mr Wells said: “During this election, we’re treating everyone who comes to the poll as if they are COVID positive because there’s some folks that we know who are COVID positive, some 3,408 when I last checked. I believe it may have gone down slightly.

“But we don’t know those who are incubating at this point at time and those who are positive and have not yet gone to get a test and as you know there are persons who are in quarantine and coming out to vote and so at the end of the day, what we’re doing is we’re ensuring that as best as possible we treat every individual as if they are COVID positive so we have those health protocols in place to ensure that the health of the Bahamian people is protected through the process.”

... why is it so hard to set up one site for the quarantined OUTDOORS with proper spacing and PPE's for observers and poll workers? These people lead the country, but can't think their way out of a wet paper bag!

they dont even have to do that. Just allow them a special drop off ballot. Count those ballots separately. If the decision is dependent on those ballots there's a post election process to verify them

D school average all around. No common sense either

Ex-Minister Wells is a flip-flopper he is a teller of untruths while looking a person straight in their eyes, which makes persons like him very, very dangerous.

"suggesting that doing so could result in several legal issues for the Minnis administration."

I knew that was why they switched. It appears that their modus operandi is to declare all kinds of unconstitutional edicts but once challenged they crumble

Just go back to Wells and Dames' effusive statements just last week on how ridiculous it was to allow quarantined to vote. Yiu dont think they coukd have consulted tge AG before speaking? And if they did and he once again steered them wrong, why did they leave him as AG so long?