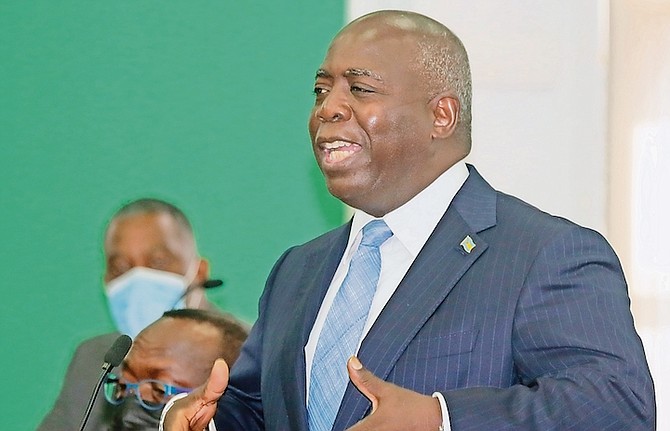 “It didn’t have to be this bad,” Mr Davis said during a virtual rally last night.

“A lot of the failure and misery we see around us is the result of bad policy choices, and the failure to plan ahead.

“That’s not my opinion, that’s just a fact – our country is at the bottom of regional and global rankings on COVID. The countries in our region who face the same challenges and obstacles that we face have done better – they have fewer cases and fewer deaths per capita.”

He said if elected, the PLP would give clinics and hospitals the resources they need.

“We’re going to have free and widespread testing – because we’ll never stop outbreaks without more testing,” he also said. “Free testing is going to be expensive but not nearly as expensive as failing in the fight against the virus, the way we are now.”

He said the PLP, if elected, will hold virtual town halls with medical professionals and will continue public health measures like masking and limiting the size of gatherings until the virus is under control.

He said this will be done with ordinary legislation, not Emergency Orders.

He repeated that the PLP will end the travel visa fees which he said are hurting Bahamian families and businesses.

He also said a government led by him will stabilise the country’s finances.

However he said this will be done not by asking the poor and middle class to pay more.

“Dozens of countries around the world have cut VAT over the last year, and we can, too. Reducing VAT to 10 percent will make things just a little easier, and make your money go a little further,” he said.

“Everyone knows our country needs to bring in more revenue – and we can do that by asking the wealthiest Bahamians to pay their fair share, and pay what they already owe.”

He said a government led by him would fast-track projects and investments needed to kickstart the economy and chart the nation out of the financial crisis.

Not so in France, where the appetite for accountability has landed former Health Minister Agnès Buzyn in la merde,having just been indicted by the Court of Justice of the Republic – a special court established specifically to hold government ministers accountable for their actions – for “endangering the life of others” through mismanagement of the Covid-19 pandemic, which has cost the French 115,000 lives. If found guilty, she faces a year in jail and a €15,000 fine. Buzyn, a former doctor, did not have a good pandemic. She stood on the steps of the Elysee Palace in January last year and foolishly declared, “The risks of the coronavirus spreading to the population are low.” Ooops.
But Buzyn is not the only French politician with their neck on the block. Her successor, Health Minister Olivier Véran, is also under investigation, along with former Prime Minister Edouard Phillippe.

Not so in The Bahamas. our Totalitarian leader against CDC advice that Vaccinated persons spread Covid allowed millions of untested visitors to our shores. Our Nurses Union lambasted the death wish decision made. The deaths began. A church was allowed a week long Youth Convention The massive deaths and illnesses spread further into homes, families, local work spaces, Sister Churches and social gatherings. Declaring that the vaccinated could party and socialize mask-less was the hell bender of bungling mass murders and inept leadership with totally no further future in politics during his pandemic. In France he and his elite expert team of advisors would be jailed for life as hundreds of bodies clogged the morgue. No one can answer for the dead.

No question Minnis mismanaged the pandemic and many millions went missing, however, EVERYBODY agrees, the country would have been in MUCH WORSE CONDITION if the PLP were in power!

Rubbish! Any other response to the pandemic would have produced a much better outcome than the one we experienced as a result of Minnis's incompetence and tyrannical behaviour. It would have been impossible for even a scoundrel like Davis to have gotten it more wrong and caused more harm, including loss of life, than Minnis did.

Just listen or read this bald face lie. The Bahamas is not at the bottom of the Global regional rankings on any dimension of COVID-19. Just take a look at the New York Times COVID-19 Daily Tracker and you will really begin to understand that this man will say anything he thinks will bring disfavor to the Dr. Minnis and the FNM.

I urge Bahamians to test the veracity and integrity of anything that comes out of the mouth of this intellectual midget insofar as what he is saying about how we are doing in global COVID-19 rankings. If what he says is true vote for the PLP. If what he says is untrue then vote the FNM.

I challenge this little man to stand and be honest.

And of course Minnis is no pathological liar from your most unbiased standpoint. LMAO

Once bitten by Minnis, twice shy. We were crudely handled. The Bahamas wants to return to MP Parliamentary Democracy. Time to end the inhuman totalitarian Royal decree one man rule that has lead to hundreds needless deaths as the IDB 250 million Covid loan to gov has saved no lives, bought no new oxygen tanks nor paid nurses and doctors. Where is the money? Something worst than the PLP has ever been is in power. The Queen's Build Back Better is in disarray as the global monetized Vaccine has ran aground having need for up to four booster shots - with the same scientists now afraid for too much mRNA accumulation in the human body. Two options that failed already in Israel and UK are the further lock downs and use of proof of vaccination ID as Covid negative to use as a pass. The vaccinated are shedding to among themselves and unvaccinated. All remaining options to stay safe are to stay healthy by sunshine exposure or d3, stay sanitary, exercise, vitamin cocktail with zinc, avoiding obesity and diabetes.

... we do need an end to the dictatorial incompetence of Minnis, but the answer is not to elect the PLP. I am surprised there isn't a more targeted campaign to get Minnis to lose his seat. Without him and a few others, the FNM might be the better of the two evils we have to choose from!

Yes, it's hard to say who is the better choice. I'm not a fan of the FNM or PLP. But in all honesty who is left? As I have stated before, Minnis needs to lose his seat even if the FNM wins. He needs a taste of humility!

But above all else keep in mind that the very corrupt, incompetent, arrogant, nasty and vindictive Minnis is the only sinister and evil candidate seeking to transform The Bahamas into an authoritarian police state in which the Bahamian people would have only those rights and freedoms that he chooses to give them as the self-annointed supreme ruler.

It is true the Bahamas was at the bottom of countries that handled the COVID 19 well.

PM Minnis does not have the ability to speak the truth he lies about everything.

he can hee and haw but he has no vvision.

No other PM has had a Dorian or Covid-19 pandemic on their resume.. check the records... so its easy to say what they would have done differently.. sensible people know that... come tomorrow if the PLP win, a lot of Dorian and Covid-19 issues are waiting... especially here in Grand Bahama and my home time in Abaco. They better be able to back up the talk...there will be no honeymoon after tomorrow, no matter who wins.