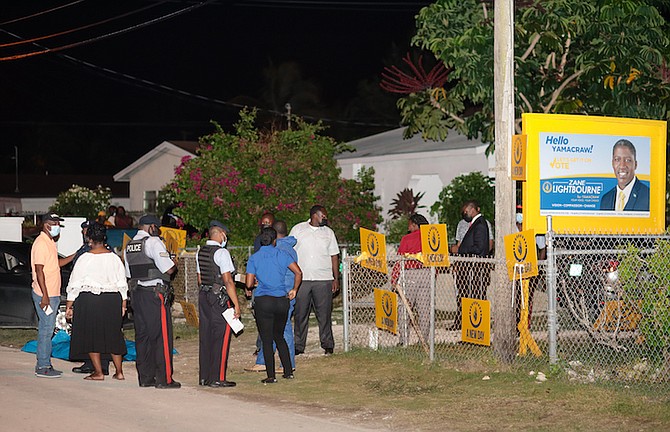 Police at the scene of the stabbing outside the Progressive Liberal Party’s Yamacraw constituency office. Photo: Donavan McIntosh/Tribune staff

A MAN was stabbed to death outside the Progressive Liberal Party’s Yamacraw constituency office last night.

Police press liaison officer Assistant Superintendent Audley Peters told reporters on the scene that the victim is in his late 30s and is a well-known resident of the community.

At the scene, Zane Lightbourne, the PLP’s Yamacraw candidate, did not want to disclose the deceased’s name publicly, but revealed he was a campaign worker.

However, sources told The Tribune that the victim is Kendrick Cambridge.

ASP Peters explained that shortly after 7pm, police received reports of a stabbing incident that occurred on Antigua Street, Elizabeth Estates. He said it appeared that an argument led to the stabbing and that the victim knew his attacker.

A man is in custody helping police with their investigation. 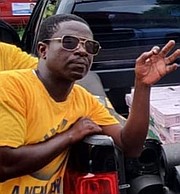 “On the arrival of our first responders, they met a male lying in front of a constituency office with what appeared to be stab wounds to his upper torso. EMS was called and following their examination of the body, the victim was pronounced lifeless on scene. We have a suspect that is now in police custody,” he said.

PLP candidate for Yamacraw Zane Lightbourne (right) and other PLP supporters hold a prayer circle after the stabbing.

“There’s no motive determined at the moment. We are early in our investigations at this time.”

Mr Lightbourne said he was not at the constituency office at the time of the stabbing, as he was in the community speaking to some residents.

“My sincere condolences. This community is grieving. It’s obviously not a very good scene – not a good scene at all. It’s very heart wrenching. My condolences to his family that I know well,” he said on the scene.

“I know his father. I also spoke to his mother, the person who takes care— looks after him. I was at their house recently and I just saw him earlier this evening before we went into the neighbourhoods.”

He described the victim as a very “helpful young man”.

“He actually was always ready to help and he had just made arrangements to come early in the morning because we were going to give some chicken souse to the residents in the area and whoever comes by. So, he was very involved in helping us in the campaign.”

In a statement issued later, he said: “We were shocked and saddened to lose one of our campaign volunteers to a violent crime today.”

Pineridge voters need to realize that every strategically important person involved with our financial, economic, and socio-political affairs is watching their choice of candidate.

I really hope that they themselves realize how important they are right now to the rest of The Bahamas. They need to be strong and faithful to the one voice which stood by them through thick and thin. They ought to support Frederick A. McAlpine.

THE FUTURE OF OUR COUNTRY DEPENDS ON THE DIRECTION YOU TAKE.
PLEASE, YOUR VOTE FOR FRED IS A VOTE FOR US ALL TO MOVE AHEAD.

Your comment here has nothing to do with the above mentioned report. However, I understand where you are coming from and I commend you for your position. But the simple fact remains that an independent candidate remains virtually powerless if he/she is elected. Politics is a dirty game. And without support from neither the opposition or the government, what can an independent representative do to render any meaningful assistance to his/her constituents? In theory, an independent candidate sounds laudable. But in practicality, it’s useless. Haven’t we seen this scenario before? Since Sir Roland Symonette I can’t remember any independent candidate winning a seat in parliament.

Dupuch in Shirelea, Wells in Bamboo Town and Bastain In South Andros are three that come to mind as an FYI

They may be powerless to offer financial assistance to constituents but they can certainly add to a meaninful debate in the house. I would love to see Komalafe in there asking hard questions

Oh yesss!!! Thank you for reminding me!! I totally forgot about these cases!!! Wow!

It's just sad to see the volunteers work so hard for these candidates.....all parties...with such enthusiasm and hope that their lives will change for the better after elections.......poor things

... as long as people with the emotional intelligence of a 5 year old form the majority of voters, reasonable people will continue to be frustrated with election outcomes!

needs an education campaign so they understand thd dufference between getting a minimum wage job and the member of parliament working a million dollar side deal. Meaning an understanding of how much corruption costs this country in terms of forward movement

I thought murder headlines were reserved for mass injuries. Why was this one allowed to take world stage. Had it been an FNM worker would the story appear in the sports section. Kind of frightening to be seen as political interference implying that is what the future holds. How many mass murders and bold killings occurred just this year alone far out classes the real underlying bold crime mentally allowed to flourish. The suggestion here is deliberately and boldly screwed with political insensitivity. Is this what future journalism holds upon our history? Seems the tribalism pattern has already been exposed and set. We pray for the family and loved ones of the deceased victim and our Bahamian nation or was it the color of his shirt that died. We don't know which direction this reporting is screwed toward as murder remains a national crises under all governments.

What are you talking about or citing? This seems so random. When has murder in the title been disallowed when reporting on a murder?

It is my hope that the Bahamas is not going back to the days of Barry Major.

How many murders have we had around election now?

— The RedParty's loyalist Shirley Street bladder, just couldn't resist a takin' 2021 Election Eve — lead story stab at anything of, about, around in close proximity to — PLP. — Yes?