‘I Was Forced To Smuggle Cocaine’ 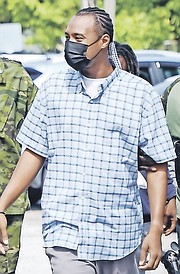 A Jamaican man who said he was forced to smuggle $20,000 worth of cocaine into the country to prevent his family from being killed by drug lords was yesterday sentenced to 18 months in prison.

Police arrested Junior Reid, 28, after he imported 2.3 pounds of cocaine into the country on September 9.

The court was told that around 12.50pm on the day in question, officers acting on information went to the Bahamas Customs Hall at Lynden Pindling International Airport. When they arrived, they noticed Reid, who appeared to look in their direction before acting in a suspicious manner. The prosecution said officers approached him and informed him that he would be searched for dangerous drugs and firearms. During their investigation, they noticed he was wearing compression tights. The court was told when officers examined them, they found four packages which all contained a quantity of cocaine. Reid was subsequently arrested.

Yesterday, Reid told the magistrate he smuggled the drugs into The Bahamas “against his will.” He claimed he came from a poor family in Jamaica and was sent away for a better life. However, he said his mother and daughter still resided in the inner city in Kingston.

Reid said a month ago, he was contacted by a mafia leader who told him he’ll have to transport the drugs to this country or his family would be killed. The accused said he was told if he “dropped off the drugs” his family would be safe. Reid said he didn’t bother contacting the police in Jamaica because he knew if he did, the gangs would automatically kill his mother and child. He also said he did not have the opportunity to contact any of his family members since his arrest.

After accepting his guilty pleas, Magistrate McKinney sentenced Reid to 18 months in prison. He also fined the accused $10,000 and told him if he failed to pay the fee, he could risk spending an additional six months behind bars.

In a separate case, American Roy Watkins was ordered to pay $300 to avoid spending a month locked up.

The Brooklyn, New York native was arrested after officers found two methamphetamine pills on him at the airport on September 11.

The court was told around 1pm that day, American border patrol agents on duty at the US Customs Hall contacted police in reference to a suspected drug bust. When officers arrived, the agents pointed out Watkins, who they said was attempting to travel back to the States after vacationing in the country. The prosecution said the US custom officers also gave police two green pills that they had confiscated from the accused. Watkins was then arrested and taken to a nearby station. When he was interviewed in custody, he admitted the offence and said he had the drugs during his stay at the Warwick hotel.

When he appeared before Magistrate McKinney yesterday, he pleaded guilty to one count of possession. As a result, he was fined $300 or one month in prison.

Yesterday, Perez Collie also appeared before Magistrate McKinney after they found amphetamine pills at his residence on September 13.

He told the magistrate someone gave him the tablets after telling him they were antidepressants. He said he never bothered taking them, but police found them when they searched his residence on the night in question.

After pleading guilty to simple possession, he was fined $1,500 or six months at the Bahamas Department of Correctional Services.