Minnis: We Fell Short Over Dorian 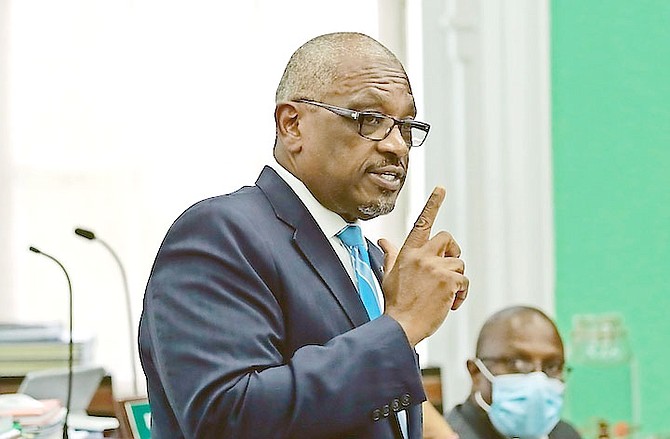 PRIME Minister Dr Hubert Minnis admitted that his government fell short regarding its Hurricane Dorian rebuilding efforts and promised to do more should the Free National Movement be returned to office following tomorrow’s general election.

While outlining his party’s intended plans should it be re-elected, Dr Minnis said, “No party should ever take the support of any constituency for granted.” He also encouraged Bahamians to reject the Progressive Liberal Party’s “false” promises.

Dr Minnis said if the PLP were elected to office, the party would stop much of the projects that were created for Grand Bahama.

“So, will you give me five (years)? Let’s keep Grand Bahama FNM country.

“Where we have fallen short in our hurricane rebuilding efforts, we are going to do more and better, including in East Grand Bahama.

“We will continue to advance housing and homeownership programmes and opportunities with tax incentives and concessions throughout Grand Bahama.

“No party should ever take the support of any constituency for granted.”

Dr Minnis promised those affected by Hurricane Dorian in Grand Bahama that there would be further reductions to the cost of land for housing construction if the FNM is re-elected.

“I was in Abaco last night and Abaco like you have gone through difficult times with Hurricane Dorian and the pandemic and for Abaco the land opportunities we have promised, we have already reduced the cost to Abaco by 50 percent because of what they’ve gone through. I said to Abaco that next week when I go back to Cabinet, I will ask my Cabinet colleagues to reduce that by a further 25 percent.

He continued: “Grand Bahama will likewise be reduced by 25 percent. I want you to know that I have heard, and I understand your many concerns and needs.

“More than $100m in concessions were given across Abaco and the Abaco keys and Grand Bahama under the Special Economic Recovery Zone Act. The Small Home Repair programme provided direct assistance to just under 3,000 homeowners for Abaco and Grand Bahama after the hurricane.

“The FNM is asking you and I am asking you for the opportunity to continue the work we started before Hurricane Dorian and the COVID-19 pandemic that struck our Bahamas.”

He also promised the creation of an electronic ID, adding Grand Bahama would also become a technological hub under the next FNM government.

During his rally speech last night, Dr Minnis took a swipe at new parties and independent candidates, saying the election is between the FNM and PLP.

“Grand Bahama, there are many candidates on the ballot this year. Government will inherit lots of $400. We live in a vibrant democracy. People have a right to offer themselves for election. However, let’s be very clear about something: this election is a contest between the FNM and PLP. The government of The Bahamas can only be FNM or PLP.

“If you want to prevent Brave Davis and his PLP from being in office then your choice is FNM.”

He also said: “I know many PLPs in Grand Bahama were disappointed when Brave became their party leader. You never wanted him. He is an embarrassment to you. By coming with us this one time you can get rid of Brave and find a new more suitable leader ten years from now.”

Fell backwards not short would be more appropriate.

what projects and what land is he talking about?

technological hub Grand Bahama has heard that before

... "we fell "short"! People died, we lied and we have ignored you for one year, but I promise that if you vote for us and we win, we will borrow more money to make sure you are taken care of."

I wonder how many dimwits will fall for that one!

I assume you people live here in Freeport...if you don't then here leave it alone... this place and Abaco went thru hell.