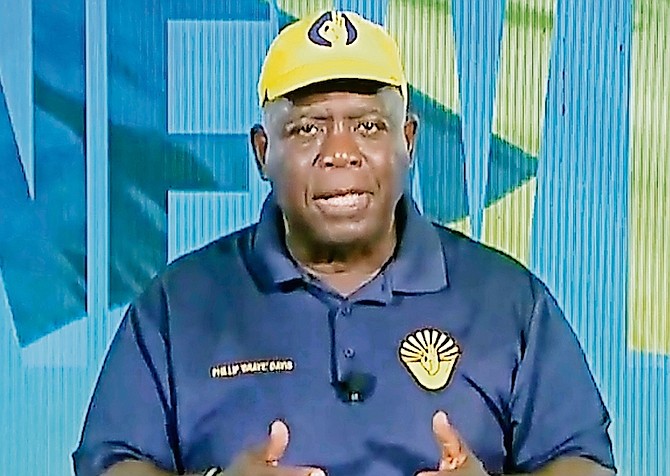 IN a final push to garner support, Philip “Brave” Davis sold himself as a formidable leader in stark contrast to an “out of his depth” Prime Minister Dr Hubert Minnis whose last four years in office were marked by “a poverty of vision”.

As he lambasted Dr Minnis last night during a virtual rally, the Progressive Liberal Party leader zeroed in on the Killarney incumbent’s political strategy in recent weeks of “shouting last minute promises” from rally stages. He said if re-elected, a Free National Movement government had no intention of keeping them.

He further criticised Dr Minnis’ refusal to debate him on national issues, suggesting he was not surprised by this.

For his part, PLP Deputy Leader Chester Cooper painted the FNM as a scandal tainted party, out of touch with Bahamians. He said Dr Minnis was also a man who did not stick to his word.

In addition, he said the Minnis administration’s handling of the COVID-19 pandemic showed a lack of care for Bahamians.

“How can you ask people for their support if you’re always running away? The truth is, he’s out of his depth. The job is too hard for him. I’d feel sorry for him, but he’s done too much damage to our country for me to feel pity.

“Now he’s shouting last-minute promises from a rally stage, but he didn’t keep the last set of promises he made to you, and he has no intention of keeping these, either. Last-minute promises aren’t the same thing as a strategic plan. If he had a real vision for the country, he would have shared it, instead of calling my name all day.”

Mr Davis continued: “That’s the biggest tragedy of this government: a lack of vision, a poverty of ambition. They don’t have the imagination or courage or competence to create transformational change in our country. They only reach for boldness when they’re enriching their inner circle. But our problems are too big to think small.

“We’ve been sharing our economic plan with you since March. It’s part of our comprehensive Blueprint for Change, which our candidates have been sharing with you in your communities. It’s a bold vision for a more dynamic, more inclusive, more resilient economy.”

The Cat Island, Rum Cay and San Salvador incumbent went on to express hope that the majority of Bahamians would vote for the PLP, saying to stay home or vote for independents was a vote for the FNM.

“I hope you’ll support us tomorrow,” he said. “Thursday the 16th, and then starting on Friday, the 17th, I hope you’ll partner with us to start turning that vision and plan into a reality.

“If you’re registered to vote tomorrow, please vote. You have your country’s future in your hands.

In his virtual rally speech, Mr Cooper said a vote for the PLP would usher in greater equality and prosperity.

He said: “We can continue to wander aimlessly under the visionless, inept, scandalised Free National Movement, or we can usher in greater transparency, equality and prosperity with the PLP.

“We can ensure that The Bahamas is a place that works for all Bahamian – rich, poor and in between – or we can continue to let FNM friends, family and lovers hoard the wealth while the average man and the middle class suffer.

“You know, at this point Minnis has shown us who he is,” Mr Cooper also said. “You should believe him. He’s the man who sat next to Peter Krieger as he signed the fake signature on the shady Oban deal.

“He knew what was happening and he sat there - dry eye. That was all a flam.

“This is a man who will say anything. He publicly opposed value added tax then brought about the largest tax hike in Bahamian history.

“He marched against Resolve, but now I hear FNMs are purchasing property through Resolve at discounted rates.

“He marched against the ‘Spy Bill’ too. Then he passed an even more intrusive bill when he became prime minister. He promised a green city for the people of Ragged Island after Hurricane Irma four years ago.

“Still no working solar array, not connected to (a) grid. As I have cried in Parliament many times before, still no school, no police station, no nurse, no administration building.”

“Formidable leader “??? More like Formidable Liar, and if given the opportunity will lead us down the garden path again!

Should Comrade Brave, fail at unseating the Red Election Machine, — will be of his own undoing by his not focusing the more attention which he should've to, — Why the need government purchase soo many millions of pencils that Renward, openly bragged about.
— Is Renward, encouraging voters to carry home a voter's souvenir keepsake pencil?
— Could a discovery of a warehouse, stocked bales rubber — lead to a need to appoint members to a post-2021 election, Eraserhead Royal Inquiry, Yes?

PROMISES, PROMISES, PROMISES. Comfort to a FOOL, don't let that be you. I mean, this man had all the time in four years, now in one week he promising eerryting except to f#$k him up his A$$ and in his MOUTH. A dangerous person. What happened to the promises he made in the last term and didn't deliver? are these also included or is he saying to the Bahamian people f#$k those last term promises they don't count now, only the promises I make now do?

Thats why you shouldn't vote for FNM or PLP, both make promises they never keep.

Cliches and Sweet Talk do not constitute a Strategic Plan. The PLP leaders have been running from answering questions about their time in office. Why did they allow Nygard to corrupt all the ministers? Why did they cause the reputation of the Bahamas score on the Global Corruption Index to increase substantially?

Listen to the slick attempt from this personally dishonest man to tarnish the image of a leader who is way above him in integrity, intelligence and capacity. How many unsuspecting clients has this dishonest man Davis ripped off? Is He is going to run this game on Bahamians?

Mr Davis is literally and figuratively unable to rise to the job of being Prime Minister of our nation. His past precedes him and what is past is prologue.

The fact is that the PLP did not run a candidate capable of being the Prime Minister ...certainly not this little round fella "brave"....