Stateside: Early Sign Democrats May Be Safe In The Mid-Terms 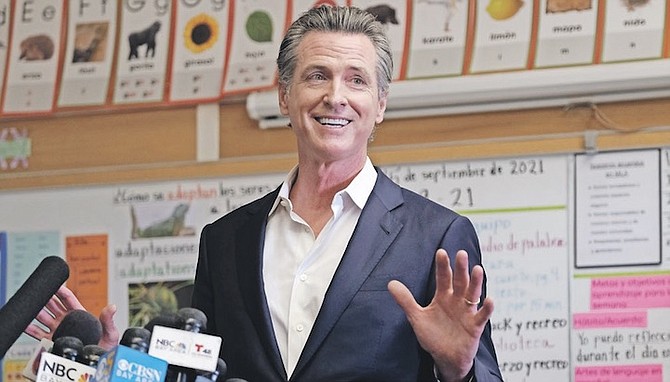 There was a lot of political news in the US on Tuesday. Pundits and commentators from both the left and the right had plenty to talk about. The big question is whether any of the news was really significant. It might be.

In California, Governor Gavin Newsom easily fended off an attempt to force him from office led by political opponents who were trying to take a page from the Donald Trump playbook to unseat the Governor.

The Republicans and even an opportunistic Democratic in California doubtless recalled the events of 2003, when a bland and ironically well-named governor named Gray Davis was recalled and replaced by superstar actor, naturalized American weightlifter, Kennedy family in-law and Republican moderate Arnold Schwarzenegger.

In those days, 18 years ago, California was beset by power brownouts, blackouts and a sense that Davis was basically a feckless barnacle on the sturdy hull of once and future Governor Jerry Brown, a truly legendary Golden State politician.

These are different times now, and Tuesday’s results give renewed hope to Americans who hope the destructive influence of the shameful forces unleashed by the presidency of Donald Trump can be comprehensively and quickly minimised or erased.

While lots of candidates vied to replace Newsom in this week’s California election under the state’s peculiar recall rules, a black conservative radio host with no prior political experience became the leading choice to replace the Governor.

Larry Elder has been a fixture in the Southern California media scene for 30 years, and his name recognition, often hard-right political views and sheer durability, enabled him to vault to the forefront of the recall effort.

Elder and several other contenders tried to essentially blame Newsom for COVID-19, devastating wildfires and anything else that has recently beset America’s most populous state. Eschewing facts with a facility resembling that of master prevaricator Trump, Elder got a lot of publicity.

But neither he nor anyone else got nearly enough votes to seriously threaten Newsom’s tenure in the state house, though both President Joe Biden and Vice President Kamala Harris took time to hold pre-election rallies with Newsom to make sure his victory was impressive.

And it was. Early results showed voters opposed Newsom’s recall by a whopping 64 percent, with only the state’s agricultural central valley and northern woods supporting the recall effort.

Kern County, home to country music mecca Bakersfield and House Minority Leader Kevin McCarthy, favoured the recall by nearly 60 percent. And the state’s rural far north, home to the mighty Redwood trees but few people and far more similar to Eastern Oregon than to the metropolises around San Francisco Bay and the Los Angeles basin, also voted to oust Newsom.

Those voters are the heart of the Republican base. But they aren’t sufficiently numerous in California to tip any statewide election without help from Democrats and Independents – just like rural denizens in states like Pennsylvania, New York, Illinois and Michigan, or Georgia and North Carolina for that matter, aren’t by themselves strong enough, either.

And the recall effort also foundered in California’s true swing district – the often-conservative coastal sectors south of Los Angeles and including San Diego. A lot has changed in that beautiful but crowded part of the state. While Orange and San Diego counties were once hotly contested and often quite Republican (and home to Richard Nixon’s congressional district), this is no longer reliably true.

These two, the state’s second and third-largest most populous counties, have changed to at least purple. George W Bush carried San Diego County by a narrow but decisive margin in 2000, for instance. Joe Biden crushed Trump by 23 points there last year. And Bush won Orange County by 15 points in 2000. Biden cruised by nine points in 2020.

While the Democrats are hyperbolically celebrating Newsom’s survival and touting it as evidence that they won’t suffer significant electoral setbacks next November like they did in 2010, this election was indeed a good sign for them.

It’s true that, as a state Republican strategist told reporters: “When you have the near-perfect caricature of a Make America Great Again candidate like Larry Elder, well, you can turn your voters out.”

Even Davis, the recalled former California Governor, said the following of Elder: “He was a gift from God. He conducted his entire campaign as if the electorate was conservative Republicans.”

But it’s also true the California vote gave credence to the notion that the recalcitrant, foolish resistance of Republican Governors like those in Florida and Texas to COVID vaccines and sensible public health measures such as masking are losing favour with a majority of American voters, even in typically conservative areas.

If next year’s elections will be contested essentially on the basis of the public reaction to the two main parties’ approaches to the pandemic, things don’t look very good for the Republicans.

And if Trump, still influential despite his Palm Beach exile from national politics, continues to prioritise loyalty to him over such alternative considerations as general electability in selecting those whose candidacies he will anoint with his endorsement, that’s more good news for the Democrats.

The reporters’ new book – supposedly available in South Florida book shops in less than a week – is called “Peril” and chronicles Trump’s frantic last days in office and the concerns about him from top officials in the American national security apparatus.

Garnering the most early headlines is Army four-star General Mark Milley, who for the past two years has been serving as the top military official in the US – Chairman of the Joint Chiefs of Staff in the Pentagon. Milley, a Princeton and Columbia graduate with a further credential from MIT, was previously best known as the unwitting and, by his account, unwilling prop for Trump at St. John’s Church in Washington, DC.

In one of the most reprehensible moments of his presidency, Trump led a photo-op group from the White House in January of last year across a square to St John’s Church, which had been damaged during protests sparked by the death by police of George Floyd eight months earlier. The group included Milley, dressed in military fatigues.

“My presence in that moment and in that environment created a perception of the military involved in domestic politics,” the Army General said later. “As a commissioned uniformed officer, it was a mistake that I have learned from, and I sincerely hope we all can learn from it.”

Maybe his remorse over misplaced fealty to a corrupt President led Milley to speak openly about confidential matters to Woodward and Costa, who reported the following conversation between the Joint Chiefs chair and House Majority Leader Nancy Pelosi as Trump melted down after his November 2020 electoral defeat.

“What I’m saying to you is that if the Republicans in Congress couldn’t even stop him from an assault on the Capitol, who even knows what else he may do?” Pelosi asked. “And is there anybody in charge at the White House who was doing anything but kissing his fat butt all over this? You know he’s crazy. He’s been crazy for a long time.”

According to Woodward and Costa, Milley replied: “Madam Speaker, I agree with you on everything.”

It apparently wasn’t just America’s top military official who feared Trump would stop at nothing to remain in power.

When Trump petulantly responded to his electoral defeat in November 2020, CIA Director Gina Haspel reportedly warned Milley: “We are on the way to a right-wing coup. The whole thing is insanity. He is acting out like a six-year-old with a tantrum.”

Haspel also reportedly worried that Trump would start a war with Iran to justify remaining in the Oval Office.

Even Secretary of State Mike Pompeo, a Trump sycophant from the earliest days of his administration, reportedly told Milley the President was “in a very dark place” after his defeat at the polls.

Further details will doubtless be teased out from “Peril” by its ambitious publishers in coming days. Few if any will flatter Trump. And the longer he lingers in public disgrace - and his acolytes fumble public health policy - the greater are Democratic chances in next November’s election.