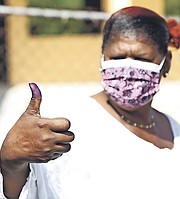 A VOTER gives the thumbs up after voting at Gambier Primary. Photo: Racardo Thomas/Tribune Staff

Some observers expressed concern about low voter turnout as some polling stations did not appear to have large crowds and people reported about being able to vote in minutes instead of waiting for an extended period.

At several sites, there were by far more Progressive Liberal Party supporters adorned in party colours than any other party and for the most part they seemed to be more confident of a win than the others. 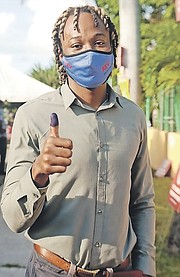 The Tribune tried to speak to a man after he voted in Mount Moriah, but he was not in the mood to stop for an interview.

“I just did what I had to do,” he shouted over his shoulder. “I don’t like the media so I’m not talking, but Minnis has to go.”

At a polling station in Killarney, voters bunched up together with absolutely no social distancing. Voters moved in the entrance gate and came out in record times offering no smiles and no indication as to how they voted.

The Tribune spoke with William Smith as he completed voting in Killarney.

“Yes ma’am I’ve noticed the eeriness out here,” Mr Smith said. “It’s definitely different. This reminds me of 2012 when Ingraham was voted out and resigned that night. It was the same look on the voter’s faces …. As for me, I voted differently this time. I won’t say how I voted, but it’s a first for me. God help us all. I think either way this Bahamas is in trouble.”

At the Carmichael constituency, there was a set up with stalls bearing the logos and insignias of all political parties. Those stalls had food, t-shirts, masks, and soft drinks to offer to anyone who desired them. 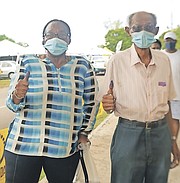 Voter Danny Roker said, “It’s a new day! We’ve given the FNM a chance in the last administration and see what we got there. We got tricked, bamboozled, fooled and they lied to us. I think ‘Brave’ Davis is a good man and I believe he will do right by the Bahamian people. It’s a new day!”

Priscilla Murphy had just voted. She said Desmond Bannister is her man of business.

“The reason why I support Desmond Bannister and the FNM totally, they are caring people, people who listen to your concerns and people who see The Bahamas moving into a new direction,” she said.

“Even though the PLP is saying a new direction, I don’t see them being good directors for this country. When you look at all the things the FNM has done in the last four years there’s no way I could have voted for anyone else but M. Bannister. So my heart is with the FNM. The FNM empowers people but the PLP does not empower people.” 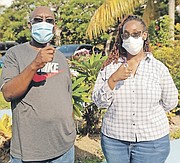 Not all was quiet yesterday however.

In terms of concerns, the Progressive Liberal Party said an issue with a ballot was raised at a Yamacraw polling station and it was seeking to have the matter addressed.

“Please note that in Yamacraw a voter was given a ballot with a mark on it,” the PLP said. “The voter noticed the mark and asked for another ballot. The legal team is having voting suspended to have all ballots checked.”

In an interview with The Tribune, Mr Dames called the move “unacceptable”.

He said he was concerned when he saw the PLP supporters allegedly “interfering” with voters on the line.

“One of the concerns I have and my team, we were in place at our office around 3:45 this morning and so we went through a series of briefings and so I always remind my team that we have to set examples. It’s all about respect. It’s all about how you’re perceived,” Mr Dames said.

“The campaigning is over. People should have already made up their minds and it’s now up to them to exercise their constitutional rights. I was very concerned when I showed up here this morning when you have the candidate along with the attorney and a group of others interfering with the voters on the line.

“That’s a no no so I reported it to the police as well as the returning officers. That’s unacceptable. You can’t have that and it’s bothersome especially when you have international observers who are here viewing the process. We want them to see that we’re civil and can conduct free and fair elections and that’s what it ought to be about.”

At Thelma Gibson Primary School, in the Elizabeth constituency, the line that formed before 8am quickly moved once constituents were allowed to wait at their polling divisions. They waited patiently while socially distanced.

“It wasn’t bad at all. It was quick and simple. I was in and out in probably like 15, 20 minutes,” said voter Wayne Taylor. “They had everything spaced out correctly. Personally, I didn’t have any issues with it. Everything was okay from my end.”

Voter Ashton Stubbs also commented on the quickness of the process as well.

“At the polling divisions, they had chairs that separated persons from one another. Social distancing was enforced and so it was a really good process. Really organised.”

However, when asked about satisfaction with the protocols being followed, former Minister of Health Dr Duane Sands said he had some concerns.

“You know as you look around some people are following the protocols other people are not. In the rooms, I believe that protocols are quite safe,” he explained.

“You know if you recall when you went in they would’ve had you sanitise and they had to sanitise your thumb, sanitise your pencil and so on and so forth. So from that point of view I think it’s safe. The number of people in the room is not great, but this many people in the same place we gotta be worried.”

The scenes at the polls paled by comparison to the thousands of people that queued for the advanced poll last week.

JoBeth Coleby-Davis, the PLP’s candidate for Elizabeth, noted yesterday was a “complete contrast to how disorganised the advanced poll was.”