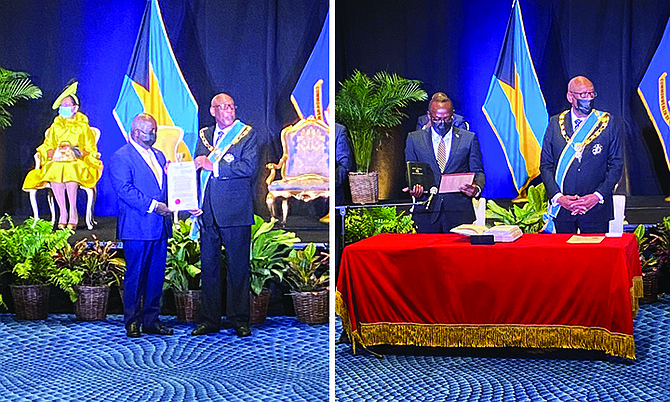 Mr Davis was sworn in as Prime Minister yesterday but Mr Cooper took the oath of office today and was also sworn in as Minister of Tourism, Investment and Aviation.

The ceremony was held at the mega resort due to extensive renovations at Mount FitzWilliam, Government House.

Tourism, investment AND aviation??? The tiny bubble of hope has already popped! Too gravaliciously power hungry and without supportive experience. SSDD. Nothing new about it.

Chester Cooper is okay. He’ll be effective in these offices.

... I can only hope "Brave" can see the wisdom of not appointing himself, Obie Fred, or Alfred Sears Minister of Finance. In fact if either of the last three get a serious appointment, it will be clear that Brave has not divorced the PLP of the past and they can expect to be routed in the next election!

May they all place the Lord ever before them with him at their right hand they will not be disturbed.

With genuine love and concern for people especially those who need help most. Gid will bless all of your efforts

Correction God will bless all of their efforts.

Hopefully the investment portfolio will not amount to stop review cancel and stall. Glad Obie is not in tourism, old dead ideas. Time will shortly tell on the rest.

Yes I was worried Obie would get tourism again. This is a good sign.

with a reported less than 40% of registered voters casting votes, Bahamians aren't being served, the will of the people has to be front and center, Davis I hope is smart enough to see the overall picture.

So Mr. Cooper has the expert knowledge on how to attract foreign investments, deal with all the aspects related to our main industry and understand the aviation business which has razor thin margins on the best of days. - Different day, same crap -

@KapunkleUp.He should not do that.He should develop policies with the input of the civil servants .It is really the permanent secretary and the senior technical officials who should manage those ministries and departments.

Most politicians don't have the technical back ground to manage those ministries. That is why you have a civil service. A former FNM MP said something like this on a radio show. He wish he could take every man, woman and child to Canada. So Bahamians could see how it is governed compared to the Bahamas.

I know that's what the theory is but I think it's fair to say that decades of practice have shown how bad this system is. As a Minister, the person gets a fat salary to run his/her department. If the Minister has no clue how to do it, what's the point of the position? If our government were a corporation, Ministers would be VPs who would have to have the skill set to do the job.

Canada lol. What was he talking about, federal or provincial governance? Provincial governments tend not to be as bad, but the feds are filled with incompetent buffoons on par with the idiots that run our institutions here.

You have to take an English test for PR, coming from an English speaking nation (which you pay for). Doesn't matter if you are English, you will pay. Has he ever dealt with the morons at the CRA lol? People should live in Canada before they talk about it. The Canadian feds are the last government that I hope Bahamians would ever learn from. Mind you, I think devolved powers may be a good idea us. Nassuavians aren't going to understand Grand Bahamian or Abaconian issues, and shouldn't have as much power as they currently do imo. Maybe expand local government for the bigger islands.

The true reputation of the RedParty's 2017, 39 House-elected MPs was never in doubt from the opening of the first election morning's poll,— And it stuck in the minds of the overwhelming majority voters — right into the election night's, last closing polling division. — The impartiality to the Voters' anger at Minnis, and his band Reds. — transgressed across, — all political parties alliances. — Short of a day election miracle, it would've been impossible for Brave to have defeated Minnis, and so handsomely, — without lots RedParty's helping hands, Looks likes the Reds were grabbin' at the gold's coattails for a chance be electing Brave, as the colony's new premier, — Yes?

As long as Obie wasnt put near the dollars. Hopefully Chester doesn't give all the contracts to cash n go.

Everybody and they ma will need a favour now. The only way to ensure you are being objective is to set a standard. From the start

KapunkleUp, at least YOU get it. Between the Ministers and civil servants, we have a revolving door of corruption, inefficiency and a permanent lackadaisical attitude to jobs, with a mere handful of well-meaning folk who perform their duties to the best of their abilities. The longer the starus quo continues without a total revamping and upgrading of the system, along with no improvement in the level of education of the civil work force, the further our Country falls into an increasing state of reverse prosperity and hardship on the majority of its citizens, who are fooled into thinking they rule........

Let this be the last day of wearing party colours. I wish people driving with PLP flags would be encouraged to take them down, party over, the work now is for all Bahamians

@ComradeThisIs, we Bahamalanders, — Across Transgenders, — Don't exactly, take likin' to any persons — Wantin' violate we's — Birth-right — To freely engage as we so delight in doin' — 365-day game politics, — Yes?

Davis Cabinet picks will determine whether he survives for 5 years. If he picks The Old Guard, it's over.

@Sheepie, you shouldn't tarnish with a — wide brushstroke, — excluding Obadiah, — as in which — Old Guard picks, — Yes?