WORLD VIEW: On the heels of COVID, Climate Change swings a wrecking ball 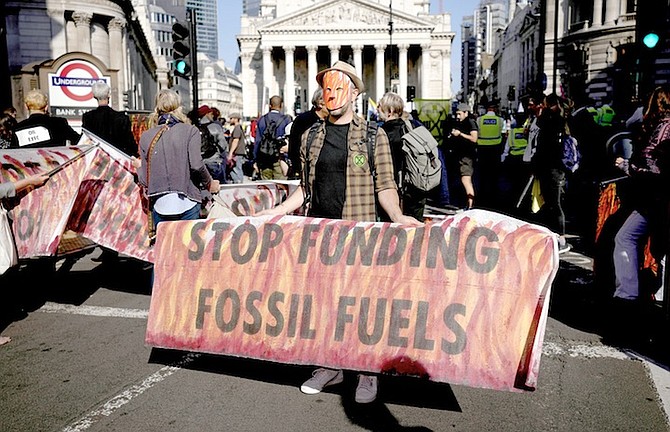 AN EXTINCTION Rebellion climate change activist holds a banner backdropped by the Bank of England, at left, and the Royal Exchange, centre, in the City of London financial district in London earlier this month. According to a study from University College London climate scientists released on September 8, strict limits on amounts of fossil fuels extracted from the ground are needed to meet climate goals of the Paris Climate Agreement. Photo: Matt Dunham/AP

(The writer is Antigua and Barbuda’s Ambassador to the United States and the Organization of American States. He is also a Senior Fellow at the Institute of Commonwealth Studies at the University of London and Massey College in the University of Toronto. The views expressed are entirely his own)

The public health and economic impact of the COVID-19 pandemic has rightly focused the attention and resources of governments around the world on suppressing and containing it.

The cause has been made more costly and more prolonged by those who resist inoculating themselves against a disease that has officially infected 227 million people worldwide, killing 4.7 million of them. Estimates of underreporting in many regions put the death rate, more realistically, at seven million.

While governments – particularly those in small countries with scarce human and financial resources - have been concentrating on getting out of the trap of the pandemic - the persistent and pervasive threat of climate change has been growing alarmingly.

The entire world is now faced with the troubling prospects of long periods of extreme heat and drought followed by devastating floods and overflowing rivers; severely reduced agricultural production, leading to food shortages; increase in vector-borne diseases such as dengue fever; grave water shortages and hugely increased costs of energy.

All this will impact businesses of all kinds, causing closures, unemployment, poverty expansion and greater hordes of refugees and migration than we have seen so far.

A new study, conducted by the prestigious, Royal Institute of International Affairs (RIIA) in London, paints a grim picture of the prospects for the next 30 years, unless greenhouse gas (CO2) emissions are significantly reduced by the world’s biggest polluters. These include the United States, China, India, the European Union and Canada.

Worryingly, the report concludes that if emissions follow the trajectory set by the reduction commitments made by countries, there is less than one percent chance of reaching the 1.5°C Paris Agreement target.

Caribbean islands and continental countries, such as Belize and Guyana, with low-lying coasts would feel the full brunt of this pending disaster. Here are some of the findings in the report.

Globally, heat-related mortality has increased by nearly 54 percent in people over-65 in the past two decades, reaching 296,000 deaths in 2018. If emissions do not come down drastically before 2030, then by 2040, 3.9 billion people are likely to experience major heatwaves.

In recent years, regional drought and heatwaves have caused 20 to 50 percent crop harvest losses. The global food crisis of 2007–08, led to a doubling of global food prices, export bans, food insecurity for importers, social unrest, and mass protests in many countries.

By 2040, almost 700 million people each year will likely be exposed to prolonged severe droughts of at least six months’ duration. One billion people now occupy land less than 10 metres above current high tide lines. In 2020 there were 23 percent more floods than the annual average of 163 events in 2000–19, and 18 percent more flood deaths than the annual average of 5,233 deaths.

Experts are concerned that climate change is likely to increase the prevalence of emerging infectious diseases and vector-borne diseases.

They argue climate change disrupts ecosystems and increases the risk of diseases jumping to new hosts. Scientists have been warning for many years of the probability of pandemics increasing as a result of climate change.

In 2008, a study published in the journal, Nature, found that over the previous decade nearly one-third of emerging infectious diseases were vector-borne, with the jumps to humans corresponding to changes in the climate. For instance, insects such as infection-bearing mosquitoes follow changing geographic temperature patterns. Nine of the 10 most suitable years for the transmission of dengue fever have occurred since 2000.

According to the RIIA report, interconnections between shifting weather patterns, resulting in changes to ecosystems, and the rise of pests and diseases, combined with heatwaves and drought, will likely drive unprecedented crop failure, food insecurity and migration of people.

All this, the report argues, could result in the potential breakdown of governance and political systems as societies become increasingly unstable due to lack of income as well as competition over limited food supplies.

The report says that Experts are concerned that such situations could lead to a rise of extremist groups, paramilitary intervention, organized violence, and conflict between people and states.

Caribbean governments have to remain focused on the clear and present danger of the COVID-19 pandemic that is strangling their countries, but no resident of the region should take their eye off the pendulum that is swinging the dangerous Climate Change wrecking ball.

At the COP 26 UN Climate Change Conference, in Glasgow at the end of October, representatives of vulnerable countries – in Africa, Asia, the Pacific and Latin America and the Caribbean - must make it clear to the governments of highly emitting countries that their profligacy must not continue. If – and only if – these vulnerable countries have the courage to stand together, using their collective leverage, do they have a chance of causing the urgent change necessary to the policies and practices of the big polluters.

The alarm bell has been rung in the RIIA’s expert report, and it sounds a death knell for small states. It should be heeded.