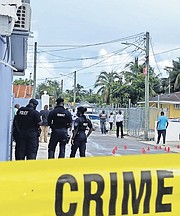 POLICE are investigating after a man was fatally shot in his car on Milton Street yesterday afternoon.

Assistant Superintendent of Police Audley Peters said police were alerted to the shooting sometime around 2.40 pm.

Upon arrival, officers were directed to a black Nissan March in the area where they found an unresponsive man in the driver’s seat with gunshot wounds.

“An inspection of the vehicle revealed a dark male slumped over the driver’s seat with multiple wounds consistent with gunshots. This vehicle was extensively damaged. The investigations are ongoing and that’s as much as we have at the moment and can share with you,” he said.

ASP Peters said the victim was in his late 30s. He was identified by close friends as Walter Johnson aka “AJ” or “Rider”.

When asked if the shooting incident was gang-related, ASP Peters could not say. It is also not clear if he was known to police.

“We are in our preliminary stages and when all the information is gathered, we can come to an absolute conclusion as to the motive of this but at this time, we’re not able to say the motive of this incident. We don’t have all the facts to make a conclusion,” he told reporters.

However, the police press liaison officer said officers were following significant leads and believed the investigation would soon be concluded.

ASP Peters said police are concerned about gun proliferation in the country.

“The proliferation of firearms in our community is the real issue here and we would’ve asked members of the public on several occasions to report persons who have firearms to us and they have been doing that but the issue is the firearms,” he said.

Asked if police plan to beef up security now that curfew has been extended to 11.59pm, ASP Peters replied: “You would be aware that the commissioner of police would’ve put officers in place prior to the election. That system is still in place where we have a good number of officers and additional vehicles on the streets and about the communities.

“However, we can’t be everywhere at one time. Our eyes and ears are members of the public. The police is the public and the public is police.”

Anyone with information on these incidents or any other crime is asked to call the Criminal Investigations Department at 502-9991/2, Crime Stoppers at 328-TIPS (8477) or the nearest police station.

Thankfully whenever The Tribune refers to a mango skinned girl there can be no confusion regarding both the complexion and youth of the individual under discussion. I'm also fascinated by the fact that many of The Tribune's reporters find it easier to refer to a person of Haitian descent as being black, but seldom use the words black or white when describing Bahamians.