Vigil Held For Mom Who Died In Barrier Crash 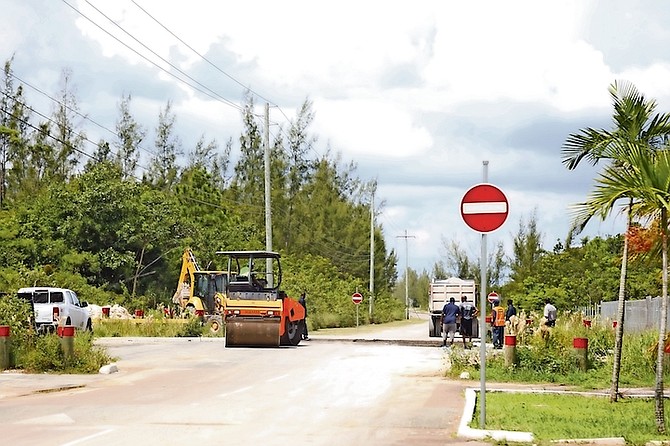 THE BARRIER in Munnings Road has been removed. 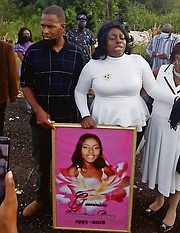 FAMILY members at the vigil for Garvinisha Anastasia Carey.

THE family of Garvinisha Anastasia Carey, the young mother who was killed when her car hit concrete barriers on Munnings Road three years ago, hosted a candlelight service yesterday to reflect on her death.

The sombre event, which was held at the site of the tragic accident, featured a number of prayers, songs and tributes in memory of a woman who was described as a wonderful mother, dutiful daughter and loving friend.

It also came days after the concrete slabs that blocked access to Munnings Road were removed by some unknown person on Thursday night. A video was shared on social media showing a man in a tractor removing the slabs on the night of the general election. An official at the Ministry of Works has reportedly said it did not authorise the removal of the barriers.

The 22-year-old mother died in June 2018 after her car crashed into the concrete barriers that closed off Munnings Road.

Patrice Carey, mother of the deceased, said she hopes the road will remain open and a portion of it be renamed in honour of her daughter.

“She saved lives,” Mrs Carey said through tears. “She alone saved lives. I visited this place up to one year after (her death). Almost every day, my family and I would come in the evening and light candles. Set up smoke almost every day.

“I request that this street, a part of it, whatever part that they choose, be named Anastasia’s Way because her way made a way for many and today we are crossing over Anastacia’s way.

Mrs Carey said coping with her daughter’s death has not been easy for the past three years. However, she said yesterday was the first time the family was able to grieve.

“This allowed me to grieve for the first time so what y’all saw here was a mother’s first time releasing the grief of a loved one for what those boulders stood for and took away from me,” the mother-of-six said. “I could not grieve in peace but today God, in fact the very night of the 16th, God smiled on me.

“It was shown (to) me and my family in the night and peace began to reign and from that day to now, it’s the beginning of the process of healing for myself and my children.”

She also lamented that since the accident, no official in the former Minnis administration reached out to her family.

“I have never once been contracted. I never been reached out to from the gentleman in charge and responsible for a national disaster like this. People may say some storm or flood or fire is a natural disaster but I could tell you that this life stolen here was a national disaster,” she said.

In April 2018, the Ministry of Public Works advised it would be carrying out works on Munnings Road for one week in connection with the intended closure. The road was later turned into a cul-de-sac. The road was closed in May 2018.

Days after the accident, the family called for the resignation of then Works Minister Desmond Bannister and had even acquired the services of attorney Wayne Munroe to file a lawsuit against the government, and particularly the Ministry of Works.

Some complained after the accident that the road was dimly lit in the dark, making the erected barriers difficult to see.

Speed bumps and reflectors were placed on the road after the fatal crash.

Asked about this at the time, former Prime Minister Dr Hubert Minnis said: “You have to ask technical people. I am a politician. I am not a technical man.”

Pressed on if due process was done before the road was closed, Dr Minnis said the issue had been addressed on numerous occasions, adding “Let me go for lunch.”

Speaking on those comments yesterday, Mrs Carey said: “Can you imagine what it is to be disregarded in that way? I had no peace. My family had no peace. I had a daughter that until last year she didn’t even tell me she was suicidal. I have my children who wake up through the night crying. I look up and I’m constantly wrestling over what could I have done. How do I address, how do I fight the powers that are and now, today by God’s almighty grace I was able to come out here.

“To Hubert Alexander Minnis, I want you to know that for your acts you will not be forgotten. . .”

Very sad story indeed. Do we even know why this road was closed to begin with?

Bahamas press wrote on it.

"Pressed on if due process was done before the road was closed, Dr Minnis said the issue had been addressed on numerous occasions, adding “Let me go for lunch"

no heart and no soul