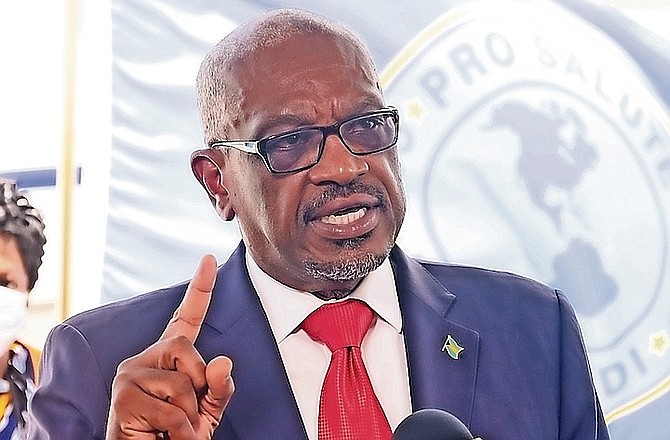 FORMER Prime Minister Dr Hubert Minnis told Free National Movement executive board members yesterday evening that he will not vie for leader at the party’s next convention but wants to lead the FNM into the House of Assembly until a new leader is chosen, according to three sources with intimate knowledge of the meeting.

Dr Minnis also reportedly told executive board members that he will hold on to his Killarney seat and has no intention of resigning from Parliament.

The Tribune understands that yesterday’s gathering at the party’s headquarters came a day after a majority of the FNM’s incoming parliamentary caucus voted for Dr Minnis to enter Parliament as leader of the official opposition. For at least some of the caucus members, their vote came with the expectation that he will not remain leader of the official opposition indefinitely.

Dr Minnis agreed to ensure that his appointments to the Senate come after consultation with the MPs-elect, sources said.

During last night’s meeting, Marco City MP-elect Michael Pintard, the current frontrunner to succeed Dr Minnis as leader of the FNM, reportedly pushed back against Dr Minnis’ offer to remain FNM leader until the convention. Sources said he believes Dr Minnis should resign prior to that event.

The executive board did not recommend a definitive timeline for the next FNM convention, though it is anticipated the party will hold the event within two to three months.

The executive board vote likely reflects a divide in the party about the short-term future of the FNM. On one hand, some want to ensure that Dr Minnis is treated with dignity and respect and is allowed to enter Parliament and the convention as leader while playing an instrumental role in the transition of the party. On the other hand, there is fear among some that Dr Minnis might just be biding his time and will turn around and contest the leadership position at the convention despite his current stance.

Ultimately, the FNM’s council will decide during a meeting at Holy Trinity Anglican Church today whether it will approve the executive board’s recommendation or not. The meeting is expected to feature as many as 300 council members.

Insiders believe the meeting could be a heated one. Yesterday’s executive meeting was not contentious, however, though frank views were said to be expressed about what led to the party’s worst electoral defeat in 44 years. The FNM won seven seats in the House of Assembly versus the Progressive Liberal Party’s 32 seats.

After the meeting, Dr Minnis did not discuss what happened during the election.

“It’s all being discussed at the party level,” he said, adding that meetings are ongoing.

In addition to Mr Pintard, the favourites to succeed Dr Minnis as leader are East Grand Bahama MP-elect Kwasi Thompson and St Barnabas MP-elect Shandendon Cartwright. Former Elizabeth MP Dr Duane Sands is also considered a possible contender and there are some in the party who hope he is appointed to the Senate.

In recent days, the jockeying for support has reportedly been intense in the FNM. Sources said some supporters of Dr Minnis have called council members requesting their support for him to remain leader while opponents of Dr Minnis have called around requesting support to oust him as leader. Sources said it is unclear which side has the majority support.

Excellent!!! And please take Duane Sands with you!!

Thats the way it should be. Minnis probably remembers what Ingraham did when he threw his toys out the pram like a baby.

On one hand, some want to ensure that Dr Minnis is treated with dignity and respect and is allowed to enter Parliament and the convention as leader while playing an instrumental role in the transition of the party.

The 17 members of the FNM executive board who hold this most foolish view obviously must believe Minnis treated the Bahamian people with dignity and respect during the last 4 years or so, especially during the pandemic. But nothing could be further from the truth!

Many Bahamians of lesser means were heavily fined and/or imprisoned because of his insanely unreasonable, aribitrary and selectively enforced protocols and orders. Many Bahamians and their businesses were mistreated and harmed by Minnis's gestapo goon squad of so called COVID-19 ambassadors. Many families were deprived of their ability to treat a deceased loved one with dignity and respect at a grave side funeral service. Many newly married young couples were deprived of even a relatively small wedding ceremony limited to close family members and friends. Frankly, Minnis doesn't deserve an ounce of dignity and respect given all the harm and grief that he has caused the Bahamian people, not to mention the FNM party.

The FNM council had better over-ride this ridiculous decision of the FNM executive board or risk giving Davis and the hierarchy of the PLP party all of the ammunition and incentive they would need to crucify both Minnis and the FNM party in the near term. Minnis is infinitely more disliked by the vast majority of the Bahamian people than Christie or any other PM ever was. The FNM council would be wise to as much distance between the FNM party and Minnis as they possibly can. The future of the FNM party certainly depends on it.

P.S.: And let's not forget that Minnis cannot and should not be trusted to make good on just about any and everything he promises. We have had 4+ years of his many unkept promises to prove that point.

What about Adrian Gibson? We want him gone so we can start with a clean slate. He will carry with him the baggage of corruption forever. Start fresh and clean and the party will rebound.

If the stories on Gibson are true he should be gone. I expect we shall find out in the next couple of months, as i expect if true the Government will be pressing charges. If not then they were just election fodder.

You think, yet another red have get dragged up out from they politically appointed cushioned chairs and motor vehicles, — Yes?

Yes. May save him from going to jail.

They all have some baggage if you dig deep enough.

I suspect most Bahamians would be shocked to know the names of the members of the FNM party's executive board and the FNM party's council, and just how closely tied many of them are to Minnis himself in terms of the 'political' gifts and favours of one kind or another that he gave them.

.. good riddance. Don't let the door hit you on the way out! This egomaniac will be responsible for the unnecessary spread of covid and possibly deaths caused by the advanced poll and elections all in his effort to play God! I hope he keeps his seat so he can experience the shame he rightly deserves for the next five years!

No surrender! — The Darker side — Shirley Street's print bladder's. — Its unwillingness quit with its — Red Light Pimpin' of Minnis.— Yes?

Bring back Loretta, at least she saw the writing on the wall

Has you not recently see Loretta? — Comrade Sister, who is in lookin' sharp and smart in her 2022 Model Body. — Is back — And, the exterior is a complete do-over. — Lookin' anew — posed political challenges cross over her way. — Yes?

Peter Turnquest? Those poeple lost the ever-living minds aye? No Turnquest. . .period! Oh. . why I even "trynna" tell these people dem anything! They een listened to anything persons told them in the last four yearas. . .they een ger listen now. . .hump!! I will be watching Desmond Bannister or Rollins during this five years!! But if PM Davis "play his cards right". . .keeping them PLP hogs "tied" and away from "tiefing and rapin" the people's resources. . .he could be the PM again come 2026!! If he do not "hold them tiefin peoples them" back. . .he can start making plans to get "kick" out of ofiice come next election. . .or sooner!!

There will be no "do overs" for bad PMs and their whole party it seems. . .get it right or get GONE!!

Is the next convention going to go like the last one where someone gotta foot half the bi like LBT but only gets 10 minutes of stage time? Asking for a friend.

Minnis gone? Wait until the mud slinging starts and accusations of misappropriations .y’all may be doing Minnis a favor. Trump will be back. ROFL

Be wise intelligence branch conduct closet-wide sweep the Office of Premier (OOP) — be lookin' out 13 foreigners hired as political strategists to Minnis. — No tellin' as what lengths sneaky bunch republicans, — Heralds from Trump's, losing presidential campaign, — Is prepared to go be snoopin' on the colony's Premier Philip Edward. — Yes?

Everyone knows foreign campaign strategist failed Minnis. Their strategy of attacking Brave didn’t sit well with Bahamians, especially the swing voter that is need to win elections. Not necessarily in this case because mostly PLP s voted . FNMs stood down . Minnis brought direction and stability to the government. (At least until the vaccines arrived) so he had a strong platform to run on. Was the airport in Rum Cay that big of an issue when only 20 people use it in a week? Up until May of this year, you couldn’t hardly talk to a PLP about bringing the PLP back to govern. You would hear things like ‘y’all think Bahamian people stupid ay? Y’all think we forget ay? No never the PLP. Let them stay right where they is.’ Then Brave brought out the shiny, bright gold shirts, then the caps and the lawn posters and signs. He beat Minnis at his plan to ‘paint the town red.’ Brave covered the entire country with golden sunshine, even though there was plenty rain for crabs to crawl. Then the blue shirts came out, and the big trucks and the shopping bags. And the shopping bags took the country into a new day. At least it brighter than the world moping Minnis was left Behind in. Hopefully it is better. And Minnis and his team still don’t know what hit them . Write this down Minnis; Bahamians don’t like you to play with they heads. Don’t ever call an election in a pandemic. They don’t like uncertainty. Either call the election or leave it alone. Don’t dangle no carrots. Marlins maybe but no carrots. Bahamians like nee and they love excitement. After being locked down for do many months. Davis came along and dressed your bride in blue and gold, brought the voters to twin and straight bro the ballot boxes. The PLP and Brave Davis danced on Minnis and the few PLPS who came out to show support.

And Minnis and his Foreign experts should also note basically every radio station, tv station and media house in the country campaign for the PLP or did not support the FNM outrightly so. That was a lot of free media and publicity going to the PLP. That was powerful. And they say it was partly because of the way Minnis and he Ministers dem treated the press. Press on den!

What Bahamian parents was famous fir telling their children when they were rude: ‘ I bring you in to this world, and I surely can take you out.’ And that’s what the people did to rudely arrogant Minnis.’