The Magnificent Seven - A New Day For Women In Bahamian Politics 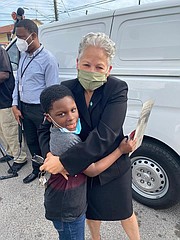 By ALESHA CADET and CARA HUNT

With the recent election of seven female Members of Parliament, five of whom have already been named to the Cabinet, it is truly a new day for Bahamian women in government. 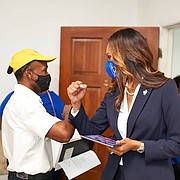 The two remaining PLP female MPS are Bamboo Town MP Patricia Deveaux and Seabreeze MP Leslia Miller-Brice. They are also expected to have key positions in the Davis administration. 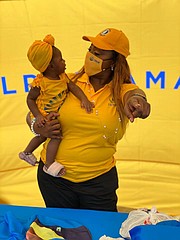 This week, female Tribune readers expressed hope that the strong a female presence in government will result in positive results for the nation.

Elizabeth MP JoBeth Coleby-Davis is Minister of Transport and Housing. 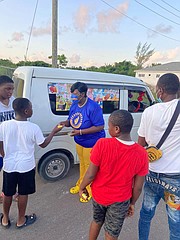 “I am excited to see what they bring to the table,” Marva Rolle told Tribune Woman.

“I was disappointed in the last administration because I felt that they did not focus on women, they only had one female minister and I won’t comment on her. I feel like if you want to represent the country you have to all voices of the country at the table.”

“I will admit I did not vote for the PLP, but I will give him (Prime Minister Davis) credit for these appointments. We all know that women are leaders and I hope that these ladies will bring discernment and wisdom to the Cabinet. I like that they will be tackling some ministries with strong portfolios. I really hope they do well.”

Seven women being voted into Parliament gives hope to little girls for their future in the country, and it gives adult women the courage and determination to not give up on their goals.

After Mrs Hanna Martin, the new Minster of Education, took to social media to thank God, along with the community that voted for her, women flooded her timeline with encouraging words.

There were comments like: “We love you too. A woman of character. A woman for the people. Congrats to a great woman and a great leader.”

Another comment said: “Congratulations to my woman of business. Thank you for always making us proud. God bless you and keep you as he continues to order your steps.”

Tribune reader Alexis Smith noted that with the current state the Bahamas finds itself in, female power is desperately needed.

“I was particularly happy that Glenys was given Education,” she said.

“I feel that because of her time in Englerston, she will know exactly what challenges the inner-city kids will face with virtual learning, etcetera. I also know that Pia Glover-Rolle is a woman of class and professionalism and I feel that her presence can address some of the service issues that we see in the public service. And I look forward to seeing how other ladies perform.”

The new Minister of State For Public Service, Pia Glover-Rolle, expressed her heartfelt gratitude to the residents of Golden Gates on her social media. She said it is now that the real work begins.

“We have a lot going on and a lot of people are hurting and need strong assistance, so I feel that the women will be able to provide that. I hope they will be able to use their natural female empathy combined with their professional ability to move the country forward,” she said.

Leslia Miller-Brice, the new Seabreeze MP, said she feels humbled by the support she received, and assured her constituents that she will work night and day to improve the community.

“Whether you have voted for me or not in this election, I want you to know that I am dedicated to serving you. When we work together as a community we can accomplish great things,” she said.

“From this point forward, your struggles are my struggles, your concerns are my concerns, and your hopes are my hopes. We have a lot of work ahead of us, but I am ready and excited to work for you.”

Bahamian women responded to her by wishing her to be “her best with God’s help.”

Ginger Moxey, Pineridge, the new Minster of Grand Bahama vowed to “inspire hope, enable opportunities, deliver results and to transform the constituency one person, one project, one community at a time.”

Lisa Rahming, the new Minister of State in the Ministry of Social Services and Urban Development, said she is immensely honoured to have been chosen by the electorate. She added that it’s not just about opening the door, but swinging it wide open and pulling up chairs to the table.