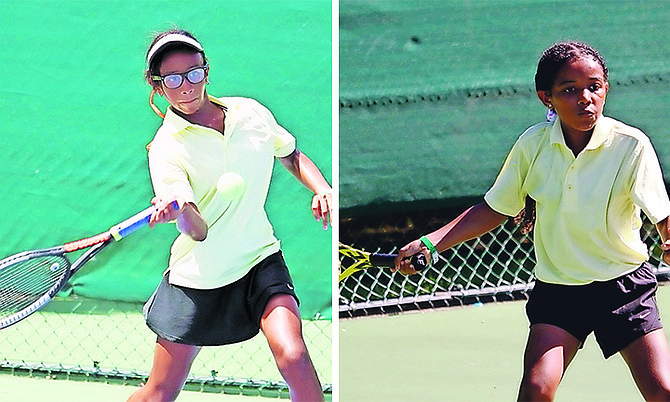 THE Bahamas Lawn Tennis Association’s three-member team at the 2021 COTECC Under-12 Tournament in Santo Domingo, Dominican Republic, pulled off another victory but this time, coach Marion Bain said the players had to show a lot of resilience to prevail.

After sweeping St Lucia 3-0 in their opening match on Monday, the Bahamas won 2-1 over Trinidad & Tobago yesterday in the tournament at the Centro Nacional de Tenis Parque del Este that is staged similar to the Davis Cup/Billie Jean King Cup format.

Each event will be played with two singles and one doubles.

The first two teams of each Sub Region plus two teams from Mexico will qualify for the ITF/COTECC U12 Team Final, which will take place on the week of November 22.

Briana Houlgrave, an 11-year-old student of Windsor Academy, came out strong once again in the number two spot for The Bahamas in singles, winning 6-0, 6-3 over Shiloh Walker of Trinidad and Tobago.

However, in the second set, Madu was forced to retire at 5-5 after leading the match 1 set up. It came down to the doubles and Houlgrave teamed up with Kaylah Fox, an 11-year-old student of St Andrew’s, as they secured the win with a sizzling three setter performance 6-3, 4-6, 10-3. “It’s been a tough day but we were able to pull the doubles off,” Bain said. “In the doubles, the girls were resilient, playing a little more experienced team. They trusted the process and were very receptive to coaching.”

The BLTA congratulates the team of Madu, Fox, Houlgrave and coach Bain as they won their second straight match in two consecutive days for Team Bahamas.

The BLTA is pleased with the performances of all the girls.

The performance on this global stage is testament of the hard work that each girl has put in over the years. Last year, due to the pandemic, there was no competition.

“This year it was important for the BLTA to ensure our players have an opportunity to compete and represent the nation,” said BLTA president Perry Newton.

“The girls and their parents have stayed ready which is reflective in their level of play.

“We hope that they continue to do their best as this experience will only serve to develop each one of them on their tennis path.”

The Bahamas will face host nation Dominican Republic today and, like they did in their first two matches, coach Bain said the mindset is going to be the same for the players. “I want them to be prepared to give 100 percent effort, attitude and focus on one match at a time.”