DIANE PHILLIPS: How long will we bury our heads in the sand?

THERE are 8,700+ words in the Chapter 5 of the constitution of The Bahamas. That’s the chapter dealing with Parliament. I read every one of those words, some of them twice, because I wanted to make sure I was reading correctly when I saw references to disqualifications for serving in the Senate or the House of Assembly if you are deemed to be of unsound mind, for instance, or serving a sentence exceeding 12 months or under sentence of death.

Requiring soundness of mind to hold an elected office or a Senate seat seemed reasonable enough and demonstrated that a lot of thought had gone in to writing into the Constitution such detail as how long a sentence you would have to be serving to disqualify you from holding office.

Of those 8,700+ words, there was not one that required a member of Parliament to live in their constituencies.

In fact, the only reference to residency was, and I quote, the candidate “has ordinarily resided in The Bahamas for a period of not less than one year immediately before the date of his nomination.” There are other references to once elected to the House or appointed to the Senate, how long you can be absent, but no reference to actually living in the community you are elected to represent.

The absence of what would seem like such an obvious requirement comes directly from the UK heritage which many are now calling on to dismiss as yesterday’s cup of tea. In the UK, the ability to be elected to a seat in Parliament is even more lax. Not only do you not have to live in your constituency, you need not reside in the UK, though my knowledge of British history is extremely limited and I do not know whether anyone has actually taken advantage of that loophole and lived, for instance, in The Bahamas while representing Nottingham.

But the point is as clear as the waters of The Bahamas on a calm day when you can toss a coin in the bay, look down and call heads or tails. Things don’t get much clearer than that. And that is how clear it is that our communities would be one heck of a lot better if the member of Parliament who represents that area actually lived in it.

He or she would know their neighbours, feel their challenges, understand their needs, celebrate their milestones. Their very presence and availability would build trust and confidence, accomplishing more effectively and naturally what members of the Royal Bahamas Police Force try to do when they do walkabouts. How can you walk a mile in one’s shoes if you never even tried them on? How does it serve the people of Bain and Grant’s Town or Golden Shores or South Beach if an MP, accompanied by security, in a car with plates that clearly set him or her apart, stops by on a Saturday morning or moves from church to church for one funeral after another?

This is no offence to those MPs, whom I have no doubt want to do the best they can for the constituents they were elected to serve. I know they often reach into their own pockets to help or shed heartfelt tears comforting the mother of another son lost to violence.

This is not their fault. It is ours for continuing to bury our collective heads in the sand to follow British tradition and put safe distance between the represented and the representer. The price we pay is high, more young lives destroyed by drugs or taken by gunfire, more elderly afraid to leave their homes. We bury our heads in the sand and create areas of dense population and personal isolation.

You want to know where the drugs and guns are hidden? You want to know who’s dealing, renting a weapon for $50 or what pressure is being put on the young boy next door to run an errand and become a go-fer for a gang that he will later join?

Go ahead. Keep a safe distance. Get picked up in the morning and whisked to the House of Assembly or your air-conditioned office where you always have a place to park, though the citizens coming to see you do not.

Or get into the community not just for Saturday funerals. Live in it. Live its life and maybe, just maybe, we will begin to restore the sense of community that once made places like Bain and Grant’s Town the place residents loved to call home.

The timing has never been better with government announcing it will not need a referendum to bring about gender equality under the law. And while you are changing that, please consider requiring MPs to live in the constituency they represent – not in this administration, of course, but after. And while you are at it, making these changes, please add the words “or her” after every reference to him. I did not have the energy to count that number but there sure were a lot of he’s and him’s in that Constitution. 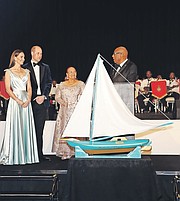 SAILING is a large enough part of Bahamian tradition that the Duke and Duchess of Cambridge were given a souvenir of the Sloop Bahamas Royal during their recent visit - and now it has been recognised as our country’s national sport.

AND ON THE OTHER HAND, THE GOOD NEWS IS THAT...

THE good news was that the government finally pulled its head out of the sand and announced it would officially recognise what the rest of us have known since Columbus landed, albeit accidentally, on these shores some 530 years ago. Sailing is the national sport.

In a land of 100,000 miles of open ocean, sailing was survival long before it grew organically into a sport. It was our transport, the way supplies moved back and forth within the archipelago and beyond. It was the means by which Bahamians of old got to the fishing grounds or went sponging or how the sick got to a hospital.

Then, at some point, the men who went sponging or crawfishing pitted the work boats they were traveling on against one another for a bottle of rum at the end of Point A. And native sloop sailing was born.

Kudos to Minister of Youth, Sports and Culture Mario Bowleg for listening to the voices, including those dating back to the days that Zhivargo Laing was the appropriate minister, calling for sailing to be named the national sport.

What we have in sloop sailing is a sport so distinctive, so majestic, so defying of mechanical engineering principles that it sometimes doesn’t seem real, like maybe it is just propelled by the shouts of men on the wind.

Picture the start line. Class A. Eight or even ten wooden boats, poised like ammunition in a weapon waiting for someone to pull the trigger. Boats are 28 feet long carrying masts up to twice that length, wooden sticks in the air supported by absolutely no rigging, the gun goes off, and on every boat every hand except the skipper is hauling anchor, hoisting sail, trying to clamber from a dead stop position to first over the start line, get into clean air with everyone else scrambling to do the same and only the sound of clanking of anchors and sails being hoisted rivals the noise of the men shouting. The louder they shout, the faster it’ll make the boat go, this phenomenon of a work boat turned racing sloop that has no business even surviving yet racing before crowds of hundreds or gathering thousands who scream and shout and drink tons of Kalik and gobble conch salad at regattas, upping the economy of Family Islands as they follow the regatta calendar course.

Congratulations, at long last, sailing will be celebrated as the national sport. OK, you say native sloop sailing, I believe it should be all classes of boats, but I’ll settle.

As regards MPs living in a constituency in order to represent it, could not agree more. Long overdue. Which is why you can have a PM living in western Nassau and never do a thing for the Cat Island constituency he represents because he does not live there and does not understand the people.

Politicians always have higher standards for others and not themselves. To be in local government, you have to live in your constituency. To be PM no retirement age, but all other civil servants have a retirement age.

Agree, that it is time to take our heads out of the sand and demand more of politicians and that they follow the line just like everyone else.

The main role of the MP is to review, debate, amend and pass laws. Their first function is first and foremost that of a legislator.

An english man said to me, Bahamians don't understand really governance. Most of the elites in this country have no understanding of how a modern .progressive country is governed.