Fighting back on crime 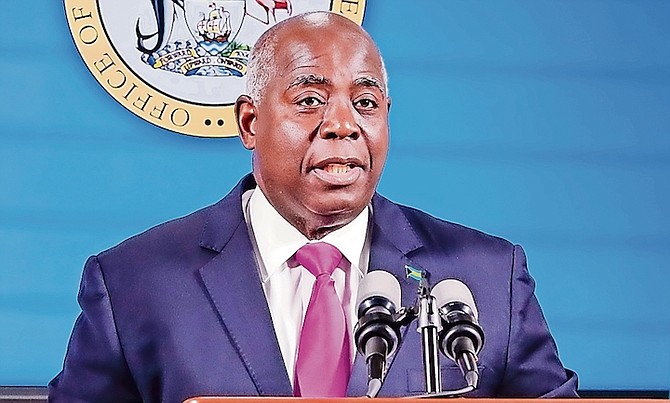 IN the wake of a recent spate of murders and violent crime, Prime Minister Phillip “Brave” Davis yesterday announced a series of crime fighting initiatives to tackle gun violence in the country. 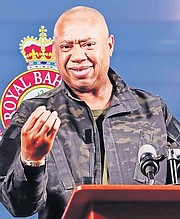 The measures include increased police presence in inner-city communities, the creation of a specialised police task force and focused attention to bettering mental health.

The government’s push to reduce crime comes after six men were killed in separate incidents since Sunday, pushing the nation’s murder count to 44 for the year. Twenty-two of those murders were recorded last month. 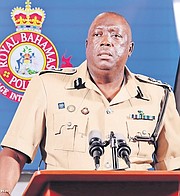 Mr Davis said evidence suggests that most of the murders appeared to be gang-related and added that many retaliation acts were now being carried out after being “postponed” due to COVID-19 lockdowns and curfews, which have since ended.

However, Mr Davis said his administration is taking a “strategic” and “unified” approach to tackling gang violence, with specific focus on hotspot communities. According to Deputy Commissioner Clayton Fernander, police have identified between eight to ten gangs in the country.

“We will increase police presence in hotspots with saturation patrols for as long as they are necessary. Our communities need more manpower and more resources,” Mr Davis said during a press briefing at the Office of the Prime Minister yesterday.

“The Royal Bahamas Police Force is creating a specialised task force focused on decreasing gang related crimes and apprehending those involved in firearms trafficking. We are expanding Urban Renewal to strengthen both community policing and the programmes that reach at-risk young people and provide pathways to opportunities and training.”

Further to that, Mr Davis said his administration will increase access to mental health services and mental health education through the public health system and other community-based initiatives.

He continued: “In the next few days, I intend to constitute the National Security Council which will support increased sharing of intelligence across agencies, allowing us to confront our security challenges jointly and with the best information possible and because criminal activities are not contained by borders, we intend to strengthen our collaboration with international partners.”

The prime minister also revealed that more resources are needed to help aid in the country’s fight against crime, saying the RBPF is looking for young people who want to serve and protect local communities.

According to police officials, the country currently has a shortage of about 800 police officers. Yesterday, Commissioner of Police Paul Rolle told reporters that ideally, the force should consist of some 4,000 officers.

His comment came after he too spoke about the nation’s escalating crime problem, saying the issue is being taken “very seriously” by the police force.

He said officers continue to target gun traffickers and crack down on the importation of illegal firearms into the country.

“The prevalence of ​firearms and illegal firearms in this country continue to be a grave concern for us in the Royal Bahamas Police Force,” the police chief said. “We’ve been working assiduously with our international partners to identify sources and methods and persons who have been actively engaged in the illicit purchase in some instances and importation of firearms in the country.”

He said many of the illegal weapons are being smuggled into the country from the United States, some through courier companies.

“We have identified that the majority of those firearms, illegal firearms, have been coming from Florida,” Commissioner Rolle said. “In particular, and what we’ve found is in recent months is a number of courier services that have sprung up in the southern communities and I have asked our partners to assist us in identifying these persons and companies and we have our liaison officers in Florida who are also working in partnership. That is yielding positive results for us as we try to interdict a lot of this firearm that is destined for The Bahamas.”

According to Commissioner Rolle, some 109 illegal weapons have been seized by officers so far for the year, however, this does not include those intercepted abroad.

Meanwhile, as it relates to crime fighting technology, Mr Davis added: “We are going to expand and improve the use of drones, CCTV, and Shot Spotter sensors so that our police have the tools they need to be effective.

“More robust intelligence-sharing, increasing the capacity of the police and enhanced technology are all critical but, in the end, reducing violence in our communities also required strengthening our families and the ties within our communities.”

They're going to constitute a National Security Council in order to increase the sharing of intelligence between agencies? You mean a mechanism to share intelligence has not been in place all this time? Holy shit! No wonder crime has always been a problem here. Each agency does its own thing. "Hey immigration this is the police commander. Y'all know about Snubby. We think he recently arrived from Foreign with a couple other fellas". "Boy I can't speak to you we doing our own investigation. Ask the defense force." "Hey defense for force. We looking for info. about Snubby and his gang." "Boy we ain't got time for dat. Ask the Flying Gang Squad." "I did already. They say they can't share that sort of information. I guess I gotta go to the AG and see if he could talk with someone."

The irony of someone who made all his money defending criminals and drug dealers coming up with so called initiatives to combat it...LOL

Two sides of the same coin. Just depends which side the sun (money) is shinning on.

I strongly believe that one of the best things that can be done to stop or to reduce serious crimes in our Bahamas is to find a method to STOP illegal guns from entering this country... for what I have seen and experienced in my 88 years on this earth, I strongly believe that most or many of us with a gun, would be strongly attempted to use it to take a person's life... will continue to write about this... after a while, many would probably agree with me... we are most likely experiencing those perilous times Jesus spoke about in Matthew chapter 24...

Well before the guns were brought into Our Country, they became a reality in our minds. We are placing too much emphasis on fighting the battle on the wrong, or, secondary front. As such, we are bound always to stay fighting and keep losing.

Premier "Brave" Davis hasn't yet politically sensed that his adopted popoulaces is indeed chiefly the ver same popoulaces who Did resoundingly demonstrated that it had it up to their bunions with Thee Mr. Minnis's stacking committees with political cronies rather than shine the spotlight on the important roles that are not being activated by each and every crown minister, ministry, departments of government, enforcements, corrections, educational, sports, social, legal, courts, jobs, medical and public boards and facilities...   all portfolios must be seen and heard to be sincerely engaging directly with and offering alternatives other than targets for more policeman's bullets. Trust me when I say that our colony's well and bad behaving youths are in dire need of hands up 24/7 - 365 days out of the year, ― Yes?

I for one feel a great deal safer now knowing that Brave and Commissioner Rolle are on the job!

"We have identified that the majority of those firearms, illegal firearms, have been coming from Florida,” Wow, great detective work! How long did it take you to figure that one out??

Comrades, either take or leave it why the Premier and the soon be ex-Commish, reside in the same policing reality, ― Yes?

They only give us enough police officers to have pretty uniforms standing in place, people to take our crime reports after the fact and officers to write us tickets on the streets. They never give us enough officers to fight crime, whether we are under the rule of the PLP or FNM. They are both exactly the same and they will always both be exactly the same. The FNM that was the FNM under the Leadership of the right honorable sir kendal GL Isaacs no longer exists. It stopped existing when the leadership changed the FNM then became the PLP.

These gangs are part of our governments and police force pockets. They cannot be separated.