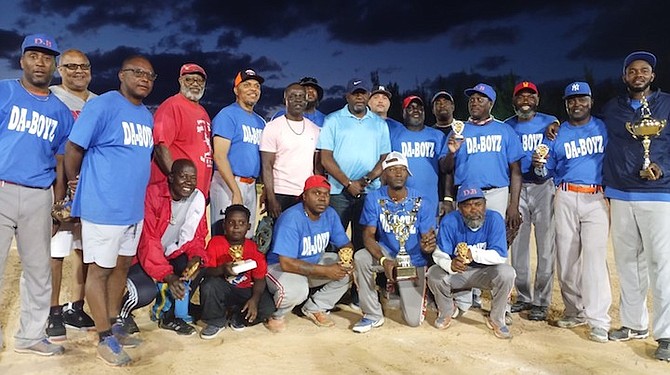 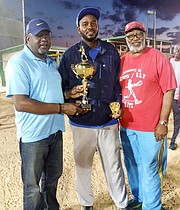 WITH renovations at the Archdeacon William Thompson Softball Park at the Southern Recreational Grounds not completed yet, the New Providence Old Timers Softball Association staged their first Memorial Softball Tournament over the weekend at the Bankers Field at the Baillou Hills Sporting Complex.

Minister of Youth, Sports and Culture Mario Bowleg led a list of dignitaries to watch the two-day event that saw the Superior Waste Department Da Boyz win the championship trophy.

Da Boyz, managed by Sandy Morley, went undefeated in the tournament and pitcher Salathial Dean was named the Eddie Ford’s most valuable player as they routed the defending champions Yelrom Home Boys 19-8.

It was Da Boyz’ second straight win over the Home Boys after they won 14-6 to advance to the final.

The Home Boys came back and knocked off the Dozer Heavy Equipment Pros 16-2 to secure their berth into the final. The Pros were managed by David Brown and DeAngelo Dillet. 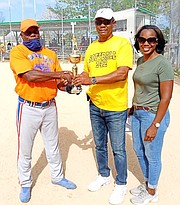 Bacchus Rolle, the Member of Parliament for South Beach, participated for the Q-Club Divers.

Bishop Delton Fernander was on hand to pray for several family members, including Chela Armbrister, who lost both her brother-in-law Ed Armbrister and husband, Kelson Armbrister, a league sponsor of the KC Construction Raiders.

Nardo Dean, of the Ministry of Tourism’s Sports Division, prayed for league members who had passed away, with their relatives and teammates coming onto the field and receiving white stemmed roses on their behalf.

“We appreciate the efforts by sponsors to make the tournament a success, and others, especially umpire Martin “Pork” Burrows, scorers Dudley “Bones” Moxey and Elsa, our assistant treasurer Andy Ford, our treasurer Clelia Armbrister and Makeva Wallace and her team at Bahamas Events & Sports for helping us organized the two day long tournament,” said Tommy Stubbs, president of the NPOTSA.

“It was gratifying to see so many faces at the park, people who have made softball the great sports that it is, including retired players Crestwell Pratt, “Doni” Lockhart, Eddie Ford, former NPOTSA presidents Lawrence “Buddy” Smith, Henry Dean; softball veterans Anthony “Boots” Weech Michael Dillet and “Banker” Fitzgerald and legendary ladies softball coach Ali Culmer.”

Stubbs, on behalf of the NPOTSA, sent heartfelt condolences to relatives and friends of their members who died during the pandemic and said that while they were not able to attend their funeral services to say farewell, they want their families to know how much they wished they could have attended.

He further noted that the league looks forward to the day when the NPOTSA can return to the “government ground,” as it is commonly called, to resume their competitive modified pitch competition.

April 20th has been set as the deadline for team registration for the NPOTSA’s new season that will start on Monday, May 2nd. The league’s executive council will meet on Saturday, April 23 to finalise all details for the opening.