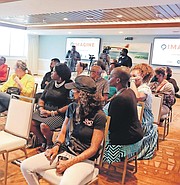 THE AUDIENCE at the Imagine Local Government launch with Rise Bahamas and ORG yesterday.

RISE Bahamas, an advocacy group, has launched its Imagine Local Government campaign joined by partners, Organisation for Responsible Governance (ORG) Bahamas and One Bahamas in Nassau.

Best known for its work surrounding the protection of women and children, particularly Marco’s Law, Rise Bahamas is also focused on the implementation of local government in New Providence, which is a part of its good governance and community empowerment pillars.

In 2018, an advisory committee for the introduction of local government in New Providence was approved by the Cabinet. It was this committee that did research and laid the groundwork to promote the concept.

“I appreciate the hard work and dedication to this cause displayed by the advisory committee which allows us to expand on what they started,” said Terneille Burrows, founder of Rise Bahamas. “We are excited to bring this project directly to the people, because as was stated in previous campaigns - local government is for the people.”

As mentioned on the newly launched risebahamas. net website, the group says it believes that The Bahamas “would benefit from local government in New Providence.”

RISE said some things local government representatives in New Providence would handle include: repair and maintenance of district infrastructure; engagement of citizens in decision-making and community development; and introduction of community or district crime prevention measures.

Rise Bahamas was founded in 2014 and has since been registered as a non-profit organisation. More information about Imagine Local Government is available at: www. risebahamas.net and on the Rise Bahamas Facebook page.