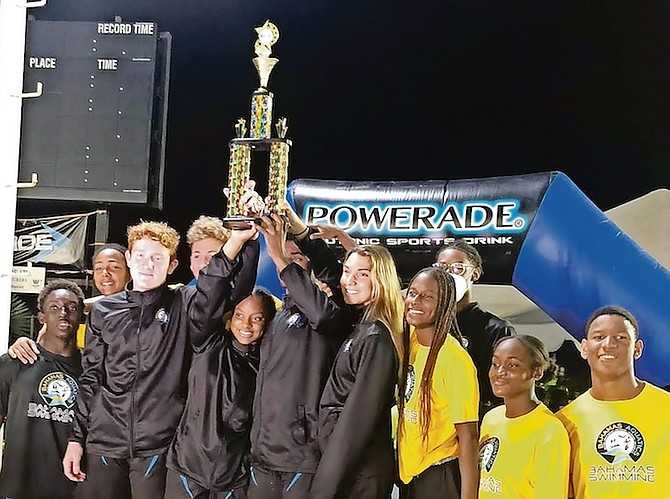 BAHAMAS Aquatics has won its fourth consecutive title, its eighth in nine years - and has received confirmation The Bahamas will host the 2024 edition of the CARIFTA championships. As the 35th edition of the four days of competition came to a close last night, Team Bahamas accumulated a total of 975 points to out-distance second place finisher Jamaica, reversing the order from the CARIFTA track and field meet on Monday night.

Just before wrapping up their fourth consecutive title and eighth in nine years, Bahamas Aquatics got the confirmation that the Bahamas has received the bid to host the 2024 edition of the championships.

The decision was made yesterday at the Congress meeting that took place on the final day of swimming competition at the Barbados Aquatic Center in Wildey, Barbados, Bahamas Aquatics’ president Algernon Cargill confirmed after the meeting. 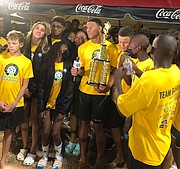 WE ARE THE CHAMPIONS: Proud members of the Bahamas CARIFTA swim team. As the 35th edition of the swimming competition came to a close last night, The Bahamas won 65 medals.

As the 35th edition of the four days of competition came to a close last night, Team Bahamas accumulated a total of 975 points to out-distance second place finisher Jamaica, who collected 833.50, reversing the order from the CARIFTA track and field meet on Monday night.

“The Cayman Islands came in third in the points standings that determined the outcome of the championships with 754, host Barbados occupied fourth with 519 and Trinidad & Tobago rounded out the top five with 355.

WE ARE THE CHAMPIONS: Proud members of the Bahamas CARIFTA swim team. As the 35th edition of the swimming competition came to a close last night, The Bahamas won 65 medals.

The Bahamas also earned the most medals with 65, including 14 gold, 22 silver and 29 bronze, while the Cayman Islands had the most gold with 25 to go along with their 23 silver and nine bronze for a total of 57.

Barbados had 22 gold, seven silver and 12 bronze for their total of 41 and Jamaica ended up with 17 gold, 25 silver and 22 bronze to trail the Bahamas by one, 64, in the total medal count, a far cry from the track tally in Jamaica.

Head coach Travano McPhee, who served in that capacity on the previous three championship teams, said it was a fantastic feat for Team Bahamas, considering that they had a two-year hiatus due to the coronavirus pandemic.

“Very proud of these kids. Four straight is not easy,” said McPhee, who was assisted by Grand Bahama’s Andy Loveitt and Camron Bruney. “We came out on the first day and with a young team, they had to get the jitters out and get adapted to the crowd.

“Some of the younger swimmers showed some nerves, but they came back on the second day and they performed very well. We had a lot more medals, a lot more finals and that carried over to the next two days. But four straight is not easy. I’m very proud of this team. No other team or federation has ever done this.” 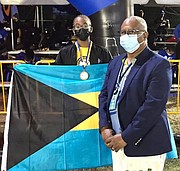 McPhee said he was proud of their dominance in the region and they’re hoping to build on this with five straight next year before bringing the championship on home soil in 2024 when the Bahamian public will really get to see what the swimmers are made of. “It would be good for the swimmers to swim at home in 2024 and get the home crowd and the supporters to cheer them on so they can turn in some very fast times,” he said.

In congratulating the Bajan Swimming Federation in putting on a very successful meet without any COVID-19 incident, McPhee said the team could not have done it without the support of the parents and spectators, who travelled with the team on the Bahamasair chartered flight.

Looking at the performances from Team Bahamas, McPhee said swimmers like Caden Wells with a clean sweep in all of his breaststroke events, Marvin Johnson in the 50m free, just missing the CARIFTA record that is held by Izaak Bastian, Tia-Isabella Adderley won two medals in the backstroke and Adderley in the breaststroke and the 13-14 boys sweeping all of the relays. “Hats off to these swimmers. They did a tremendous job,” McPhee said.

St Lucia, which is in the process of building a new pool, is expected to host the next championships in 2023.

If they opt out, Curacao is the next choice with Aruba as the second alternate.

Whatever happens next year, McPhee said Bahamas Aquatics will be looking to build on their quest to stage a successful championship in 2024, hoping for their sixth straight title. The tram, managed by Andrea Strapp with Courtney Barr as the female chaperone and Patrick Ferguson as the male chaperone, is scheduled to return home around 3:45pm today with the team trophy and their huge medal haul.

Keith Bell, the Member of Parliament for Carmichael and the Minister of Labour and Immigration, accompanied the team as the government representative.

So, when it comes to track, Jamaica's population is 10 times bigger than the Bahamas'. That is our excuse since they obtained 97 medals, and we obtained 17. We say we cannot compete against such a large country. Now, we have defeated Jamaica for the 4th time in a row, so how did we overcome this population size in swimming and not track? Our track team and our country needs more dedication to track if we want to compete with Jamaica. Hats off to Jamaica on a job well done.

I’d be curious…and I honstely do not know the answer, what sport, played on the international stage has netted team Bahamas the most victories? Maybe the Tribune Sports editor can research it.

Would be interesting, especially as the government wants to name sailing the national sport, and event we are doing nothing with on the international scene, especially compared to the swimmers.

Congrats to our swimming team. A job well done. If Davis had taken the time to look at what our Carifta teams were doing, he would have been with the team in Barbados, and not Jamaica, Then maybe again, it may have been better not to go to Barbados, as our team in Barbados may have had the results of the track team in Jamaica with his presence.

Do you see who is in charge of the Bahamian swimming federation????

Do you see who funds the Bahamian swimming federation?????

Do you see who is currently running The Bahamas government????

Swimming is considered a "bougie" sport compared to track & field that appeals to the masses. That is why one will appeal to Brave more than the other.

BTW, The Bahamas won swimming on medal points, not on gold medals (like track). Maybe the system should be standardized, then we would have come FOURTH in swimming, based on gold medals.

We didn't win track tho and what's so bougie about swimming? We live on an island! The reason It don't appeal to the masses as you claim because it isnt focused on nor supported as much as track. but its clear who is running the better program and getting better results.

Well said!! You hit the nail on the head

Both track and swimming development in the Bahamas is done by private clubs. That was noted years ago in a news report about the Carifta teams in Cayman Islands.

The late Charles Maynard then Minister of Sports made some comments about that. The decline of track and field in the public schools in New Providence begin from the late eighties.

The Bahamas has had 50 years to renounce cricket as the national sport ....... Our law makers haven't. That says it all If we are to take any law seriously, this is a prime example

In a country that is 70% obese, the national sport is EATING