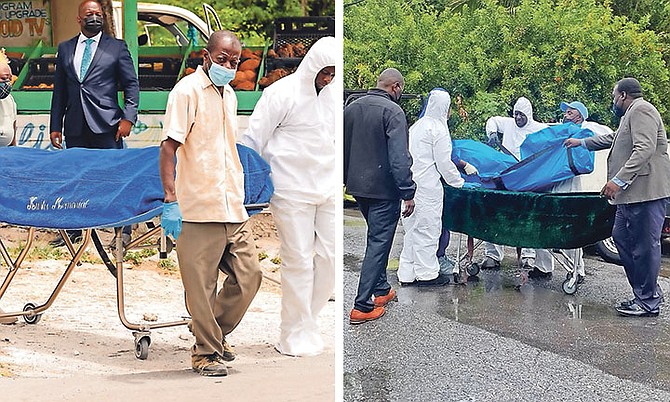 Bodies being taken away from the scenes in Baillou Hill Road, left, and the Joe Farrington Road area. Photos: Donavan McIntosh and Earyel Bowleg/Tribune Staff

One victim was shot in the community of Gamble Heights sometime after noon while the second victim was killed in the Joe Farrington Road area shortly before 5pm.

The killings come as police and the Davis administration seek to get a handle on violent crime and after 22 homicides were recorded in March, one of the deadliest months on record in the country.

KEVIN ANDREWS, who was shot dead in Gamble Heights.

While police have not officially identified the Gamble Heights victim, loved ones say the deceased is Kevin Andrews. He was 25 years old.

At the scene, police press liaison officer Superintendent Audley Peters said that officers were alerted to the shooting at Sunrise Road and Baillou Hill Road after noon.

Responding officers found a man lying on the ground unresponsive with gunshot wounds. Emergency Medical Services pronounced him dead at the scene.

Supt Peters said the man was at a fruit and vegetable stall in the area when he was approached by two men who got out of a small vehicle brandishing firearms.

“Those males discharged those weapons at that victim, fatally injuring him,” he added.

Asked if the matter was possibly connected to another incident or perhaps a gang-involved shooting, Supt Peters said it was possible.

“That is also a possibility we won’t rule that out, because as we get the information, we correlate that information, a conclusion would be made whether this was gang-related or in connection of some other incident.”

Supt Peters said the victim was not the owner of the stall, but was simply a bystander enjoying the company of the persons in the area.

He said police are now going to designate the community as a crime hotspot following the homicide and a firearm arrest made earlier this week.

“For the moment, based on the signs we’re seeing and the activities in the area, we’re considering it a hotspot because of the arrest yesterday and other information coming our way,” Supt Peters said.

“I want to say here that yesterday as a result of information that we would have received and gunshots that (were) heard, we arrested two suspects in this general vicinity for being in possession of an AK47.”

A woman who identified herself as the mother of the Gamble Heights victim admitted that the man had some challenges and had been to prison before.

She said he never robbed or killed anyone, but told reporters the deceased had a scheduled court appearance next month.

Hours later, police were on the scene of the second homicide for the day, this time in the area of Joe Farrington Road and Harp Close.

Supt Peters said first responders found a man slumped between a forklift and a trailer.

His body had wounds consistent with gunshot injuries and he was pronounced dead by EMS.

“Thus far in the investigation the male was on his forklift doing work when he was approached by a lone gunman who discharged several shots at him fatally wounding him,” Supt Peters said.

He added: “He was doing service on behalf of his company for another company when this incident occurred.”

Asked if there was any indication the shooting was connected to yesterday’s earlier incident, Supt Peters said there was no evidence to suggest this at the moment.

These incidents come after a woman was fatally shot by another woman outside a home on Pinewood Drive on Sunday afternoon.

While police have not officially identified the victim, sources say she is Nicola Cox.

Test their blood. They might have died from Covid. You Covid is a deadly disease. Oh yes it is. Really deadly. People are dopping like flies. Bodies lying all over the road. it's just crazy. Saw 15 people being taken out of the food store last week. Shopping carts half full. There were more than 3 persons in the store - so that explained it perfectly. Covid knows not to attack unless there are more than 3 persons. It's a very smart virus. Were these people wearing masks? That's the real question. Condolences to the families, but unless a news story has to do with Covid, I simply ignore it. Covid is our life now. Nothing else matters. Don't forget to keep your kids masked up and locked up at home. I think they need to develop Covid Cages. Yeah - that would be good. Put everyone in a Covid Cage.

Don't lull yourself into thinking these out-of-control killings present no risk to you. You're at risk whenever you are and about, and don't think for a moment unchecked violence will not soon spill over into the more well-off neighbourhoods. It's only a matter of time.