Osborne: I have been without a job since minister’s allegations 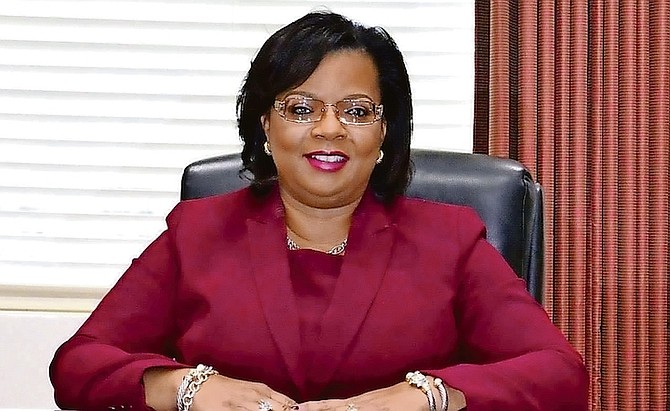 DARNELL Osborne says she has not found suitable employment and has been “without a job and benefits” since former Works Minister Desmond Bannister made damning allegations about her in 2018.

She alleges in her witness statement filed in the Supreme Court last week –– her most detailed account yet of what happened before and after she was forced to leave BPL’s board –– that she has since been subject to enhanced scrutiny and is currently considered a politically exposed person (PEP).

The matter has taken a heavy toll on her family and her health, she says.

Mrs Osborne, the former chair of BPL’s board, is suing the government for damages for wrongful dismissal, misfeasance and slander. Nick Dean and Nicola Thompson, the other board members who were a part of her faction and subsequently forced out, are also suing the government.

Mrs Osborne’s lawyers have had discussions with the Office of the Attorney General about settling the case, but no deal has been struck and the lawyers are preparing for trial, The Tribune understands.

After the shakeup of BPL’s board during the Minnis administration, Mr Bannister alleged that he intervened in the operations of the company to stop it from paying Mrs Osborne’s personal bills, including make-up services and the installation of a home security system. It was later revealed that the make-up services were for a BPL photoshoot and that other top BPL officials encouraged Mrs Osborne to set up a home security system after another board member mentioned a security incident at his home.

In her witness statement, Mrs Osborne said she took a salary cut of about $40,000 to be executive chair of BPL, having resigned as financial controller of the Insurance Company of the Bahamas.

She says her tenure at BPL had no incident until around May 2018 when Mr Bannister began questioning her about some BPL matters. These include the Shell LNG & Power Purchase Agreement; what she calls the “unauthorised travel” of then BPL CEO Whitney Heastie and board member Patrick Rollins; Mr Heastie’s proposal that BPL spend $4m to buy turbochargers; and Mr Heastie’s view that he had the authority to hire executive staff at BPL without board approval.

Mrs Osborne said she got a legal opinion from Higgs & Johnson attorney Oscar Johnson, QC, who agreed that board approval was required to hire and fire executive employees of the company. However, she said, Mr Johnson later recanted his position “after he gave indications that he had spoken with Minister Bannister or one of his allies.”

Mrs Osborne alleges that her role as chair of BPL was, in effect, reduced to an “ambassadorial” one when Mr Bannister appointed Mr Rollins executive director on July 13, 2018.

Her statement alleges: “In a meeting on August 2, 2018, the Honourable Thomas Desmond Bannister explained that he had specifically designed the CEO’s job description to ensure the CEO’s exclusive control over the second defendant and that he was upset that I and board members would waste money on fees to engage external counsel to get an opinion on whether the CEO’s authority exceeded the authority of the board and on the Shell MoU matter.”

“In defence of the board, I expressed to Minister Bannister that sound corporate governance, especially in a publicly owned corporation, mandated that the board exercise an independent business judgement based on technical and legal advice in complex matters. In response, Minister Bannister threatened to demand my resignation or terminate me if I did not change my position.”

Mrs Osborne alleged that although then Prime Minister Dr Hubert Minnis told her two days later to “stay put at BPL,” Mr Bannister told her, Mr Dean and Ms Thompson to resign because he and Dr Minnis were “unhappy with the way the board was functioning.”

Mrs Osborne said she never resigned as chair and director of BPL. She said the proper protocol for terminating her was not followed.

Mrs Osborne said Mr Bannister made “defamatory and misleading comments” to reporters in an infamous interview days after the new BPL board was established.

The witness statement alleges: “The inaccurate words spoken by Minister Bannister to the reporters wrongly suggested that I was dishonest, disruptive, incompetent, impaired the success of the boards of BPL and BEC, I misappropriated BPL funds for my own personal use and that I deliberately or recklessly failed to authorise the purchase of turbochargers thereby causing economic loss to BPL increasing load shedding and compromising the delivery of electricity to customers of BPL.”

Mrs Osborne said the allegations subject her to the threat of investigations by international professional accounting bodies and to embarrassment given her previous position as president and chairman of the Ethics and Investigation Committee of the Bahamas Institute of Chartered Accountants.

She says the allegations have caused distress and significant damage to her professional reputation.

She alleges: “After taking a $40,000 pay cut for a public service position I am left without a job and benefits.

“I am unable to obtain any suitable employment given the fact that these allegations continue to hang over my head in the public arena.

“After dismissal from the boards of BPL and BEC, I was escorted into the holding room of the US Immigration at the Lynden Pindling International Airport. Prior to this I had worked in the financial services industry for decades and travelled the world, but never once had been subject to this stress and humiliation.

“Four years later I am still considered a politically exposed person (PEP) and most recently, I was subject to additional scrutiny for general insurance for my family business. I was recently engaged for specialised skills for a captive insurance fund, however, once my name was submitted to the Insurance Commission, additional scrutiny measures were undertaken due to questions surrounding the BPL probe. To date a decision is still pending.

“On April 17, 2018 my beloved mother passed away. While I was still reeling from this loss, the minister and his cohorts were ramping up their plots and attacks.

“I have suffered tremendous economic loss, including injury to my overall reputation, in my profession as a certified public accountant and as an entrepreneur, resulting in catastrophic damages.

“This experience has affected me gravely in my personal life and relationships. At the time of my removal from the board, I had one child already in university and another one about to enter university. It has taken a toll on my family, on my general health and my mental wellbeing and it is my belief that it has aggravated a dormant heart condition for which I now need to have a hospital procedure in June 2022.

“I also lost the opportunity to join the group medical plan for retirees at my former place of employment by taking the public position at BPL and BEC. As a result of the actions of Minister Bannister I have lost the benefits of full medical coverage and group medical insurance.”

Mrs Osborne said she got a legal opinion from Higgs & Johnson attorney Oscar Johnson, QC, who agreed that board approval was required to hire and fire executive employees of the company. However, she said, Mr Johnson later recanted his position “after he gave indications that he had spoken with Minister Bannister or one of his allies.”

This was Osborne's biggest mistake. She should never have sought and relied on a legal opinion from Oscar Johnson knowing that he and his law firm were representing BPL in other legal matters.

In a nutshell, Osborne was likely 'set up' by the notoriously unethical Oscar Johnson. Any third-grade lawyer, even one as slimy as QC Johnson, could easily have seen that Osborne's personal interests were not aligned with BPL's own interests in what was obviously a high- profile contentious matter headed towards litigation.

But true to form, scumbag Johnson was not about tell Osborne that he had a serious conflict of interest in providing her with any legal advice on her personal matter given the client relation he and his firm enjoyed with BPL.

This is nonsense.
All she has to do is say she was the victim of political interference and that she should be judged on her previous record.

If she thinks she will be paid for being unemployed, it is not going to happen.

I have known people who tried and were not successful.

I actually have been in a similar sutuation, but the reputation of my previus employer was ahead of me.

The PLP want this case to go to trial so they can use the disclosures made in Court to 'beat up' on Bannister and others for how poorly BPL was run under the stewardship of the previous FNM administration.

Meanwhile, BPL is being even more poorly run under the current PLP administration with the very incompetent Sears not knowing what to do about BPL's impending meltdown.

It never ceases to amaze me just how stupid some of these policiticans are. To even open his mouth regarding makeup is just utter nonsense. Then to continue to throw tantrums and waste the people's money. Heastie was allowed to push this country into full on power insecurity, and the buck ends with Bannister and Minnis on this one. Problem is we the people allow them to get away with its. Its all talk and no ramifications for what they have created.

I hope Mrs. Osborne does get awarded. Totallay agree about Johnson. Unethical. Will be interesting if this goes to court or even it all the submissions are made public.