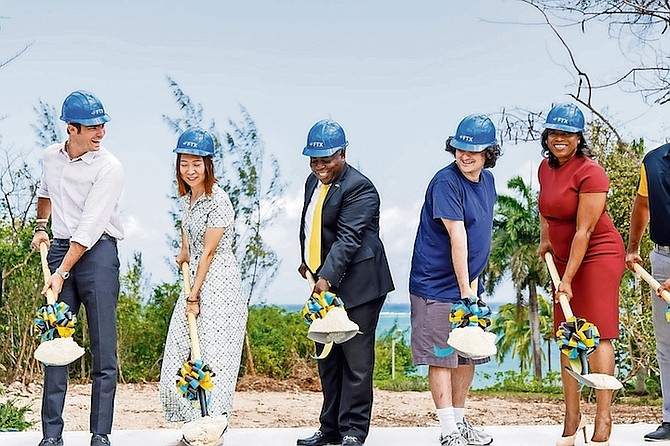 PRIME Minister Philip “Brave” Davis joining representatives of FTX Digital Markets at the groundbreaking ceremony for its headquarters in The Bahamas. 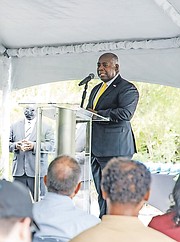 PRIME Minister Philip “Brave” Davis said FTX Digital Markets’ groundbreaking for its headquarters sent a strong message that The Bahamas is a safe place for international companies to set up shop.

FTX officials, alongside government representatives, put shovels in the ground yesterday signalling the start of construction at its West Bay Street property in the coming weeks for the company’s headquarters.

Mr Davis said the development was expected to hire at least 400 Bahamians throughout the various stages of construction. He said FTX is currently employing Bahamians in key positions of the company.

He said: “It sends a strong message that The Bahamas is open for business and that any business such as this they are safe here and this is the example since FTX has come here. “The number of interest and inquiries being made in this space it’s been overwhelming and for that I take my hat off to the Securities Commission led by Ms Christina Rolle who has been handling this thing with such professionalism recognising the need to balance the interest of The Bahamas and ensuring that good actors as opposed to bad actors come into this space.

“This development is likely to have at least 400 persons employed between the construction stages,” Mr Davis also said.

“I’m just being advised by the founders and CEO of FTX that they are continually hiring Bahamians. I met at least eight or nine key persons from FTX who are all Bahamians holding very strong positions.

“We just had a chat with them and, yes, they’ll be having a number of tech people coming in to assist them, but Bahamians are being employed and they are continually looking for Bahamians to work in this space and they’re intending to, at the same time, train them to be able to benefit from this space as well.”

Mr Davis said his administration is very committed to expanding the industry.

However, the Prime Minister declined to reveal the name of the company he intended to meet.

Photos: Office of the Prime Minister

Bahamian real estate is soaring out west. These crypto guys are buying/leasing everything they can get. If another company like this comes in we will need to build a WHOLE BUNCH of houses, and quickly.