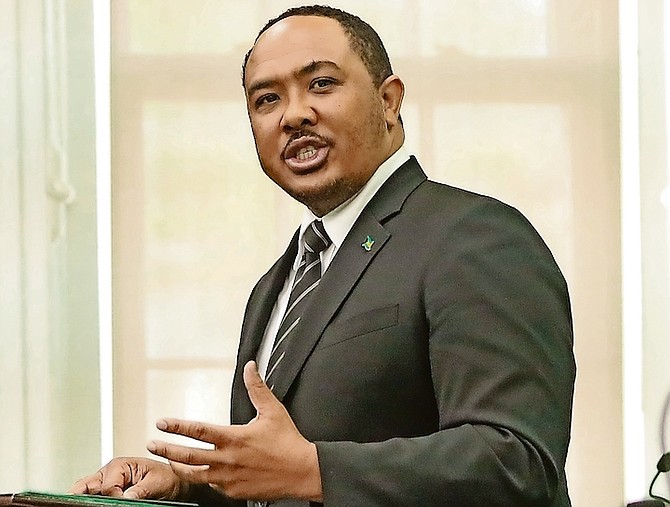 DEPUTY House Speaker Sylvanus Petty threatened to have St Barnabas MP Shanendon Cartwright removed from yesterday’s morning sitting of Parliament after the member continuously stood to argue with Englerston MP Glenys Hanna Martin as she made a contribution.

During his contribution to the Climate Change and Carbon Markets Initiatives Bill 2022, Mr Cartwright said thousands of Bahamians continued to financially struggle, echoing calls for the removal of value added tax from breadbasket items.

The items were zero-rated under the former government, but have again been subject to VAT under the Davis administration.

He called on the government to “find a way to bring some relief to those who struggle.”

His comments struck a tone with Mrs Hanna Martin. When she stood to make her contribution to the Bill, she staunchly criticised the St Barnabas MP.

She said in part: “I listened with interest to the member for St Barnabas and I’m just wondering whether he has just arrived in the reality of what has been happening in this country.

“... We went through a pandemic where it took three months before there was even an intervention and the economy was shut down and people didn’t have a dollar or a piece of bread and people had to be innovative.

“I know in Englerston we had to try to find some solutions. I didn’t hear St Barnabas crying for the poor.”

In response Mr Cartwright stood to his feet to make a point of order, telling members that he had maintained a reputation of caring about the poor and advocating for better conditions for them.

“Take VAT off breadbasket items. How can you govern looking back? Let’s look forward to it. You in government fix it,” he said.

While the deputy speaker struggled to get order amidst the shouting MPs, Mrs Hanna Martin said: “I don’t want the member for St Barnabas to believe he could bully this member.”

The deputy speaker went on to remind members that a point of order did not equate to a difference of opinion.

The Englerston MP said she viewed Mr Cartwright’s words as giving the impression that the struggles of the poor was a new phenomenon.

Still he continued that Bahamians expected the government to bring relief, to which Mrs Hanna Martin shouted: “This is not Hollywood. Hollywood ain’t in the Parliament, man.”

Once again Mr Cartwright continued to argue his position leading the Englerston MP to say: “This member believes I’m a light target in here. I don’t want him get mix up.”

The deputy speaker interjected that Mrs Hanna Martin had 27 minutes and 43 seconds left to contribute to the Bill and no one would be allowed to interrupt further.

After several more minutes of back and forth between the MPs, the deputy speaker stood to his feet in an attempt to restore order.

“Sergeant-at-arms, I am putting you on guard to remove St Barnabas if he cannot respect the rules of this place.”

In response, official opposition leader Michael Pintard stood, saying he took exception to a blanket ruling that a member is not allowed to get up on a point of order until a contributing member has concluded.

He said threatening a member’s removal on those grounds was inconsistent with the rules of Parliament.

Unfortunately for Mr. Shanendon Cartwright, the FNM really has no credibility regarding the issue of taxes & poverty. And that’s mainly because of Hubert Minnis. Let’s face it, the PLP won the election by default. They really didn’t even need to campaign. The cruel, heartless, inconsiderate and uncaring way Dr. Minnis treated Bahamians during the pandemic was astounding. Not to mention he made history by not completing his 5 years in office. It will be a very long time before citizens ever trust the FNM again. I am no fan of Ms. Hanna Martin, but she is right when she claimed that “the struggles of the poor is not a new phenomenon”. And those struggles actually appeared to be worst under the FNM.

Sad but so true. They seem to play this blind game as if the Bahamians are stewpid and not even stupid. They really need to find a new way to battle, because this route they are taking does not show a new FNM is shows the same ole red wagon.

Shanendon Cartwright is without a doubt a very good man. He actually attended SAC with my oldest brother. And even then it wasn’t hard to see that he was a man destined for leadership. He was always an astute, caring individual. But unfortunately for him and other members within the FNM, Hubert Minnis has placed them in a precarious and awful predicament. The mere sight of Hubert Minnis in the HOA makes even me want to vote for Brave Davis and Glenys Hanna Martin (and I’ve been an FNM supporter since the days of Kendal Issacs).

When it comes to VAT and poverty, the FNM has no tongue to talk. Remember, it was Hubert Minnis and the FNM who increased VAT shortly after coming to office. And this was after stating in their campaign promise that this was “The People’s Time”. It’s really discouraging to see what the FNM has resigned to under Dr. Minnis. Loretta Butler and others tried to sound the alarm years ago. However their tactics were chaotic, disorderly and lacked decorum and structure leaving many to question their motives. I understand Mr. Cartwright’s position in the above written headlines, but Hubert Minnis has debunked any possible argument or advocacy related to the poor, leaving the FNM hollow and without merit on this particular matter.

I agree with him, the PLP's taxation model is regressive.

Cartwright and his FNM party increased VAT by 60%. There was no concern for poor people.

Now their hearts are bleeding.

No bleeding heart. when young men were put in jail for selling coconut water or going to pumps for water.

He was very rude on the house floor. interpreting over and over. with no respect for the speaker