‘I struggled with breadbasket VAT decision’ 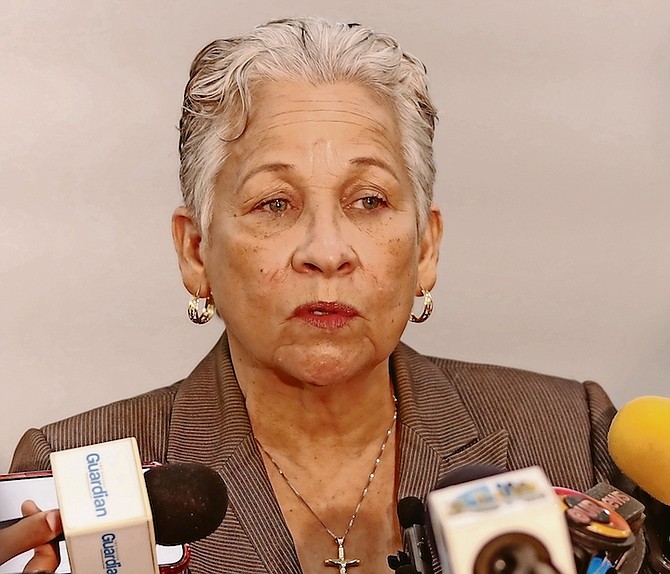 ENGLERSTON MP Glenys Hanna Martin admitted yesterday that she struggled with the Davis administration’s decision to return value added tax to breadbasket items, adding that she hoped all food items would be free of the tax one day.

The MP was yesterday again responding to St Barnabas MP Shanendon Cartwright’s repeated calls in the House of Assembly for the government to bring relief to people who are struggling.

While both MPs rehashed points from the day before —which were at the heart of a heated argument between the two on Wednesday — Mrs Hanna Martin revealed that she at some point had not always been at ease with the Davis administration’s reintroduction of VAT on breadbasket items.

“The issue here that I am speaking of and I don’t want to dwell on this because certainly and I don’t need the member to speak of my constituency,” the education minister said.

“What I want to say to him is that I am one who has an extremely keen insight into what people are going through in this country and what they have been going through for quite some time, for a couple of years now, it’s not new.

“The only observation I made earlier and acknowledging the level of hardship people are experiencing is that when the Free National Movement increased VAT to 12 percent, by 60 percent on the backs and heads of the Bahamian people, the same poor people that the member for St Barnabas (is) talking about, he supported that.

“He’s in opposition now and he wants VAT off breadbasket items. Personally I am hoping that we will see VAT come off food in general but I think the rationale was — and this is something that I myself struggled with — but the rationale was what the government did was reduce VAT to 10 percent. So, it took the global pressure off the Bahamian people.

“What it did do though was reimposed it on breadbasket items and the reasoning was, and the one that West Grand Bahama uses a lot but he doesn’t do it when he turns the coin over, (is) that exemption was benefitting big restaurants, big food suppliers, etc, and that it was anticipated that whatever hardship that would be immediately faced would be offset by other agencies like the Department of Social Services.”

In January, VAT was reduced from 12 percent to 10 percent across the board with few exemptions, but also reintroduced on breadbasket items which had been zero-rated under the Minnis administration.

“But these are tough times,” Mrs Hanna Martin continued. “We also know, and the member should be honest about this, that there are competing external pressures, which are also impacting the cost of fuel. That’s nothing to do with breadbasket items or VAT and he knows that. So, you don’t throw it in to try and convolute some perception. We have external factors that are affecting ability and the costing of food and supplies.

“We are in unusual times and so I would not want the member to conflate all of the issues that we are facing because you don’t want to give the suggestion that you don’t think the Bahamian people understand the global environment that they’re in.”

She went on to remind the St Barnabas MP that there were members of his party who were removed from government appointments because they did not vote in favour of increasing VAT from 7.5 percent to 12 percent during the Minnis administration.

Mrs Hanna Martin reminded Mr Cartwright that he was not one of them.

In June 2018, then Prime Minister Dr Hubert Minnis fired then Bain and Grants Town MP Travis Robinson and Golden Isles MP Vaughn Miller from their posts as parliamentary secretaries and then Pineridge MP Frederick McAlpine from his post as chairman of the Hotel Corporation for breach of the Manual of Cabinet and Ministry Procedure.

The men broke ranks from the Free National Movement and voted against the Minnis administration’s increase of value added tax along with FNM backbencher Reece Chipman and the Progressive Liberal Party, which was in opposition at the time.

You struggled with it along with the other Bahamians whom cant afford not one more cent to pay it. They need money for the Fusion's crazy cost for a film when RND was charging half the price. They also need money for the expensive food in Fusion, eye lashes, makeup, nails, new purse and clothes jut to go to a single movie. It is like the red carpet for local Bahamians. Yet, they complain about a 2% increase in bread, but go to the restaurants every weekend. If you want it, it is not expensive.

For many it's not about making the right choices anymore. When you have little or no money there are no choices to be made. And the very poor people of the Englerston constituency will continue to suffer a most miserable existence as long as they keeping re-electing Hanna-Martin to represent them.

Hanna is from a PRIVILIDED background, best she and the entire PLP from Davis down stop with the BULL$HIT

Living in Canada THERE IS NOT TAX on FOOD, just convince food,

SHAME ON THE BAHAMAS

For a time in Trinidad they took vat off food. But had to raise it to 15% otherwise.

I think they reversed it since.

Davis and his henchmen will tax the poor until they die.

Glenys will continue to wring her hands, but do nothing for Englerston or the public school children