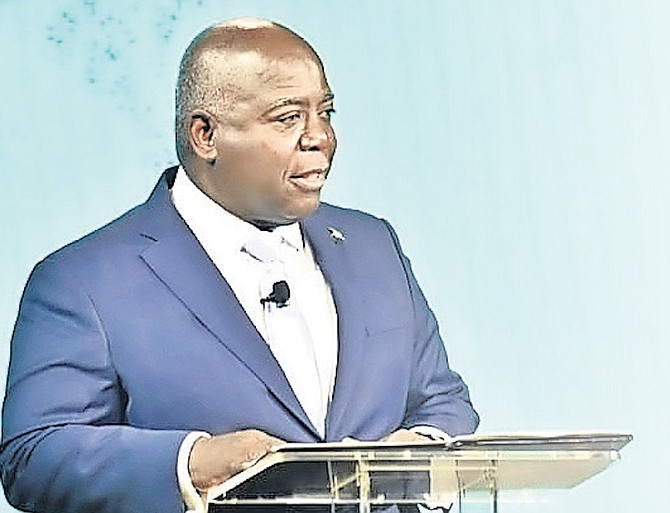 PRIME Minister Philip “Brave” Davis has given a glimpse into what his administration’s plan for economic and climate resiliency for The Bahamas will look like amid an inflationary climate and a looming hurricane season.

Mr Davis said the government intends for The Bahamas to be the first country to sell blue carbon credits and it is envisioned this will generate some of the resources needed to make progress toward transitioning the country to renewable energy and building climate resilient infrastructure.

Additionally, he said officials were currently reviewing proposals in renewable energy sources, especially solar. There are also plans to use reverse-metering to credit people who generate more electricity than they use.

He said this was essential to reducing the costs of living and costs of doing business in The Bahamas.

Meanwhile, Mr Davis said the government is also transitioning the public sector to a fleet of electric vehicles and retrofitting government buildings with renewable energy components.

Further, an agreement was signed with the European Union and the Inter-American Development Bank to support the construction of solar energy projects, including two micro-grids for generation and storage capacity in Abaco. The energy infrastructure there was badly damaged by Hurricane Dorian.

This agreement will also fund solar energy projects in New Providence and includes training so that more Bahamians can take part in the solar industry.

However, he said, change was not happening fast enough.

The prime minister made the comments during the Caribbean Renewable Energy Forum in Miami, Florida where he urged regional heads to stand together for accelerated change.

“Friends, across our region, we share the same goals,” Mr Davis said. “We need to build economic and climate resilience in our countries. That means energy security and a transition to renewable energy. It means protecting our forests and seas. It means access to more innovative financing mechanisms and debt solutions that recognise that those who contribute the least to carbon emissions are suffering the most from the world’s failure to move quickly enough. As I like to say, what happens in high-emissions countries doesn’t stay in high-emissions countries.

“Economic and climate resilience are not would-like-to-haves, they are must-haves. That is the path to survival. That is why we must continue to stand together and advocate for accelerated change. We can be more than advocates for change, though. We can also be agents for change.”

“(It) creates for the first time a framework to compensate The Bahamas for the significant role we play as a carbon sink. With conservation and restoration, our seagrasses and mangroves can continue to play a critical role in removing carbon from the atmosphere.

“We intend to be the first country to sell blue carbon credits. We hope many of our regional neighbours will follow suit. We believe that selling blue carbon credits in the voluntary carbon markets will generate at least some of the resources we need to make real progress in transitioning our country to renewable energy and building climate-resilient infrastructure. In this way, carbon markets can be an important bridge to a renewable energy future for countries such as ours.

“We have committed to generating at least 30 percent of our energy from renewable sources by 2030. Our National Energy Policy outlines the country’s pivot to a more modern, diversified, efficient, competitive and affordable energy sector, which will include updating our legal and regulatory regime.”

He urged those at the forum to keep reminding the world that “time is up” and that promises are not the same as action on climate change.

‘We’Re First To Sell Blue Carbon Credits’ We are the first to push out another globalist trap, control and deception.

“We have committed to generating at least 30 percent of our energy from renewable sources by 2030."

This may be one commitment by Davis that The Bahamas can make good on. But only because of the impending financial collapse of BPL as a result of its inability to produce affordable electricity that can be sold to its customers at a profit necessary to sustain itself going forward.

Davis “We have committed to generating at least 30 percent of our energy from renewable sources by 2030. Our National Energy Policy outlines the country’s pivot to a more modern, diversified, efficient, competitive and affordable energy sector, which will include updating our legal and regulatory regime.”

Did you NOSE grown a FOOT longer after all of that BAFFLEGARB and WORDSALAD Davis ??

Any monies made from this will go the same way as VAT ..... Squandered in the black hole of the public treasury

Davis is careful to say that this new revenue won't be put into a sovereign wealth fund.