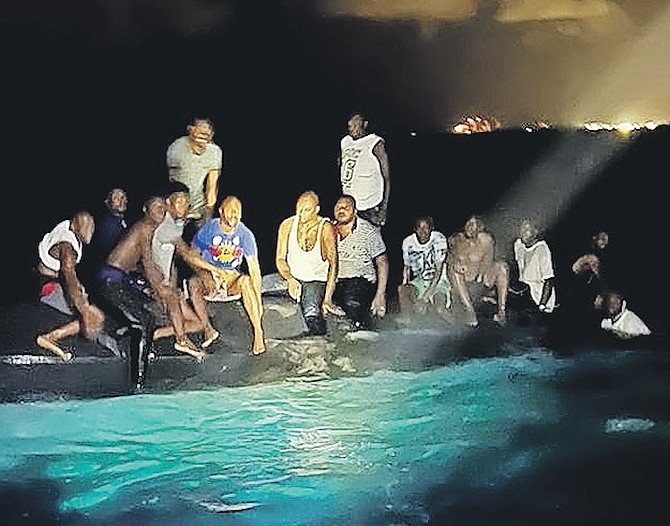 SURVIVORS cling on to the capsized boat after an incident that killed at least 17 people.

HAITIAN Chargé de Affairs Anthony Pierre Brutus says he believes the only way to discourage Haitians from travelling illegally to and from The Bahamas is to grant visas to the community.

His comments came in the aftermath of the recent boating tragedy that left 17 Haitian migrants dead.

While expressing dismay over the incident, Mr Brutus said it was also an “opportunity” for both the Bahamian and Haitian governments to come together to see how they can prevent a similar event from occurring.

“Seventeen people died on the sea,” he said during last week’s Office of the Prime Minister press briefing.

“We have to work together to see why that happened and stopped them. We have to continue to work with the government of The Bahamas. We have a good relationship and we need to keep that relationship.”

He also said while the Haitian embassy cannot discourage Haitians from partaking in illegal migration, it does encourage nationals to apply for visas.

He also recommended that the government improve this process as has been done by other countries.

“At the embassy, we cannot discourage anyone, but we can ask them to apply for a visa just as the United States is doing and Canada is doing,” Mr Brutus added.

“At that time, The Bahamas government will select who can come in. That happens in every country. The only way we can discourage the Haitian nationals from travelling here illegally is to open up a visa system for the public.”

“The Haitians then can apply. The ones that get it, get it and the other ones that are refused are refused. That would be a better way for The Bahamas and Haiti to have a better relationship. It’s about an hour from The Bahamas to Haiti.”

He also claimed that some 150,000 Haitians are currently living in The Bahamas.

Mr Brutus continued: “There are a lot of Haitians that are travelling that goes to Cuba. They go to the US. They go to Santa Domingo and there are 150, 000 Haitians living here in The Bahamas.”

“Around that number, there are persons who are here legally and (have been living) about 20 plus years in this country. The persons that are here legally can have a better relationship with others that once they come here, they will be able to flow and apply for a visa in coming to the country legally.”

Speaking to The Tribune yesterday, former Cabinet Minister Leslie Miller said he was “alarmed” and “disheartened” when he heard the figures.

He also called for the government to do more to crack down on illegal migration, saying “we cannot continue to absorb the magnitude of Haitians we absorb in the country.”

“I was alarmed, disheartened and scared as hell to know that this man is saying that at-least 150,000 Haitians are living in the country so we have more Haitians in our country than the Caribbean combined,” Mr Miller said.

“That cannot be right and we have to come with a policy now where there is no way where you can get automatic citizenship because you’re born here and you are legal. Now that’s one thing we have to grapple with as a people and if we have to change the constitution to facilitate that, we have to do that.”

“There is no way in the world you can have a foreigner here just for the purpose of having babies to have a population increase that could aversely affect the lives and destiny of our own people. This is The Bahamas. I have nothing against my Haitian brothers and sisters but I’ll be dam--d if I love them more than I love my own people... and if we don’t put a stop to it, they gone overcome us as a people.”

In May, Royal Bahamas Defence Force Commodore Raymond King told The Tribune that officials had seen a marked increase in illegal migration activity over the last several months.

He said data at the time showed that 1,892 migrants had been apprehended by local authorities since the start of this year to April, with most of those interdictions taking place in March.

In June, Attorney General Ryan Pinder described the number of migrants entering illegally into the country as being “through the roof” and higher than ever seen before.

A month later, Prime Minister Philip “Brave” Davis affirmed his administration’s position on irregular migration, saying the government will not open the country’s borders to migrants because it does not have the resources to do so.

“The world is suggesting that we should absorb all of those who leave Haiti. That’s what they will say to me,” Mr Davis said during a press conference last month.

“When I was at the summit of Americas, they wanted me to sign onto an irregular migration declaration but we have our own peculiar circumstances which I keep reminding the world of. We’re unable to open our borders to irregular migration and our refugees either because of our own limited resources…”

WE CANNOT TAKE THEM ON. IF SOMEONE IS WILLING TO USE THEIR PERONAL FUNDS THEN FINE. WE SOON BE TRILLIONS DOWN THE HOLE IN DEBT. TALKING CRAP

Really? You cannot discourage your citizens from committing crimes? You should be expelled from the Bahamas by Friday night.

Then you say the only way the Bah can deal with it is to grant visas? In other words the same amount gonna come, they just wont be illegal if we give them visas. Duh. No kidding. If i break into the back tonight and take the safe, it wont be theft if i have a letter from the board of directors giving me permission to remove it.

Seriously, it would be unbelievable if youre not ouf of here by Friday.

This Brutus guy is certifiably crazy! And this is the mentality of the people they send here. How do you even start to have a mature conversation with a guy that says is can't discourage Haitians from partaking in illegal migration? My jesus we are screwed - when our poorest neighbor is also as dense as an uneducated child.

Personally touching on Haitian Chargé de Affairs Anthony Pierre Brutus saying he believes there's only 150,000 Haitians currently living in The Colony, which is off by 75,000 ... Whilst Minister of Immigration Keith Bell's remarks draw a small true picture .... Regardless ... A sizable negative vocal chunk of The Colony's  greater popoulaces,. keeps surfacing whenever the spotlight is focused * on those  Haitians living amongst with DNA ... And never much mention of the other three main national groups living amongst that has number in the 90,000++. ― Yes?

The USA had the Contract back in the 1940s. Bahamians went over to work on the farms for given periods of time. Why can't we use that with the Haitians?

Cry shame @ The Guardian's The Revolution with Comrade "Loose Lips" Mr. Carmichael in a quick-rush challenge without providing his own correcting math attempts place fix on Haitian Chargé de Affairs Anthony Pierre Brutus believing there's 150,000 Haitians currently living in The Colony .... And, The Colony's own government's mixed-up math has confirmed the math. ― Yes?

LMAO. The very corrupt and unstable government of Haiti and the Haitian people no longer have reason to think the government of The Bahamas and the Bahamian people are stupid. They now simply know that to be the case given that they have been allowed to illegally invade our country in overwhelming numbers.

DEPORT THEM wouldn't be surprised if there are 150,000 of them here indeed, can't step outside without hearing them talking. People are employing them, giving them places to live. Everyone knows who they are just by the way they speak...can't get rid of them then this country is gone.

Need an online list of businesses that employ, and then boycott them.

Unfortunately that's not going to help us with all of the ones now on government payroll.