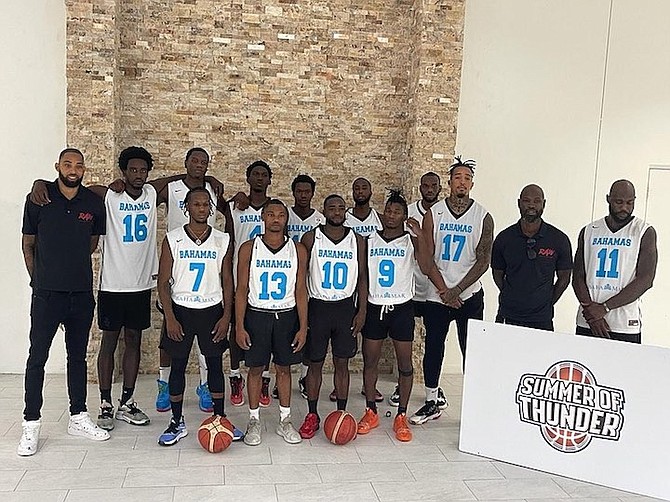 WIN COLUMN: Raw Talent Elite got a trio of clutch free throws down the stretch from Domnick Bridgewater to seal a 66-64 win over the University of South Alabama Jaguars in the Bahamas Basketball Federation’s Summer of Thunder at the Kendal Isaacs Gymnasium on July 31.

THE Bahamas Basketball Federation’s Summer of Thunder returned to the Kendal Isaacs Gymnasium in thrilling fashion with a local team scoring the first win in the series.

Raw Talent Elite got a trio of clutch free throws down the stretch from Domnick Bridgewater to seal a 66-64 win over the University of South Alabama Jaguars at the Kendal Isaacs Gymnasium on July 31.

Tied at 63 with 30 seconds left to play, Bridgewater made the go-ahead free throw, and added a pair on the following possession for a three-point lead.

The Jaguars’ Isiah Moore made a pair of free throws of his own to pull within one, but Zane Knowles blocked his attempt at a late game winner on the game’s final possession.

Knowles led Raw Talent Elite with 13 points and eight rebounds, while Kenny Isnord and Bridgewater each finished with 12 points and six rebounds.

Moore led the Jaguars with 14 points and seven assists, Owen White had 11 points and six steals, both Kevin Samuel and Marshall Kearing had eight points and 11 rebounds while Julian Margrave scored eight.

Raw Talent was coached by Kino Burrows, a former national team standout and veteran pro player currently based in France.

“I did a study on teams playing on foreign tours and most teams that played in them had a high percentage of success the following season.

“You only get to do these trips once in four years and the last one I took a team on we ended up winning the regular season title at Nicholls. This trip will help us get better for the upcoming season,” he said. “Going out of the country is big for a couple of reasons, it helps us with team building because we will have a lot of time to be around each other to build chemistry and obviously you want to win.”

NCAA programmes expected to compete over the course of the week will include Eastern Kentucky, New Mexico State and Ole Miss.

Local teams in action this week will include the Caro Contractors Pirates, Discount Distributor Rockets and Bahamas Select team.

The Summer of Thunder was cancelled in 2020 and 2021 due to the COVID- 19 pandemic, but returns this year with several new ventures.

On Friday August 5, Ballin By Da Beach, the BBF and She Hoops Elite will begin their partnership with several visiting programmes to host a camp for young student athletes.

She Hoops Elite will also face the NPWBA All-Stars and Eastern Kentucky.

On Saturday, August 6, the venue shifts to the Atlantis resort where Ohio State will face the Egyptian national team and Manhattan College will take on the Abaco Squad.