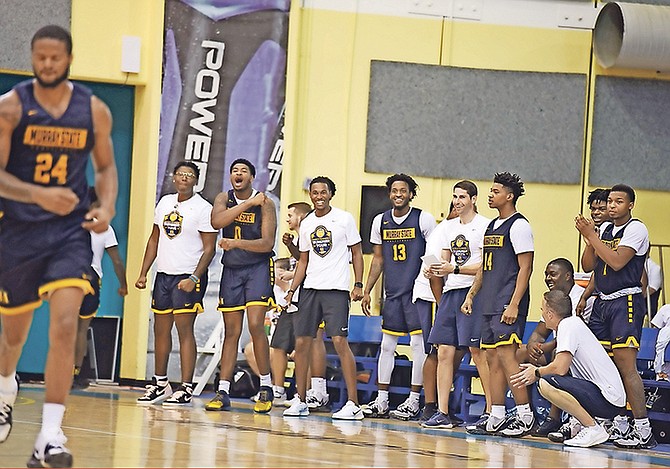 After holding off the Bahamas Select team 89-85 in their opener on Friday night, the Racers routed the Abaco Elites 115-61 on Saturday and knocked off the national champions Commonwealth Bank Giants 110-78 in their finale yesterday at the Kendal Isaacs Gymnasium.

“I’ve been thrilled with our guys’ effort on this trip here,” said Mahon, who is in his ninth year at Murray State, but the fifth as the head coach.

“This has been important for us. We have five new players, two players coming off medical red-shirt last year, so to get this experience here in the Bahamas has really been a once in a lifetime opportunity for our players and our entire programme.”

Mahon said the physicality and the size of the players on the Bahamas Select team posed some problems for his Racers. But he said it was a difference yesterday when they faced sharp shooter D’Shon Taylor of the Giants.

“These have been great tests for us as our season goes along,” said Mahon, who will allow his players to enjoy the scenes of the Bahamas today before they leave on Tuesday.

Tevin Brown, a 6-foot, 5-inch freshman guard, left his impression on the Bahamas as he led six Murray State players in double figures as they shot the lights out against Commonwealth Bank.

Brown scored a game high 25 points with five rebounds and two steals in 20 minutes on the floor. He was 8-for-14 from the field, 7-for-10 from behind the three-point arc and 2-for-2 from the free throw line. 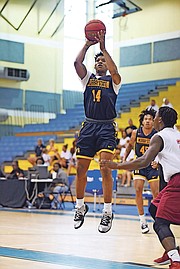 For the Giants, D’Shon Taylor finished with 24 points on 7-for-18 from the field, 2-for-8 from the three-point line and 8-for-9 from the charity stripe in 38 minutes.

“We knew as time goes on the tournament, we would experience fatigue and our legs would give in,” said Giants’ head coach Perry Thompson. “We’ve won two games so far and we lost two games. We have been 3-1, but we are just trying to help the federation as best as we can.”

There won’t be any rest for the weary as the Giants will be back in action 7pm tonight against Georgetown University Hoyas, coached by Patrick Ewing.

Tevin Brown had another game high performance with 19 points and six rebounds to lead Murray State on Saturday as they once again had a balanced scoring attack.

Tevin Brown came up with 21 points, six rebounds, five assists and two steals to pave the way for Murray State in their closest encounter on Friday night.