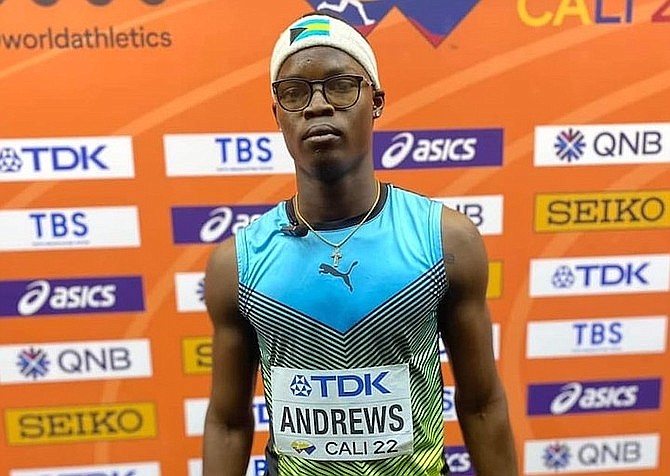 Antoine Andrews continues his season of milestones and made Bahamian track and field history with a gold medal, record-setting performance in the 110 metre hurdles at World Athletics U20 Championships.

Andrews ran a time of 13.23 seconds last night, lowering his own national record and setting a new U20 world-leading time this season at the Pascual Guerrero Olympic Stadium in Cali, Colombia.

Andrews highlighted day one for team Bahamas with his then record setting time of 13.36 in heat three of the opening round.

Less than 24 hours after setting the record, he returned to produce the fastest qualifying time of the field in the semi-final. He won the second of two semifinals in 13.39.

In his last appearance at the World U20 Championships in 2021 in Nairobi, Kenya, Andrews ran 14.08 to finish no.23 overall in the field.

“I came from far, I never doubted myself, always trusted my capabilities and my strengths,” he said after the record-breaking run.

“I just have to stay relaxed, keep my composure, use my experience from last year and just go out there to have fun.”

Javonya Valcourt ran a personal best of 54.89 in the semi-final of the women’s 400m. Her time placed her eighth in first semi-final and no.22 overall.

In the opening round, Valcourt was fifth in heat three in 55.31 to finish as one of the next fastest qualifiers.

“I think I did fine. My strategy was to really get out, hold it on the backstretch, then use my arms to carry myself down. It feels really good to represent my country and to be able to make it to this level.”

Wanya McCoy advanced to the semi-finals of the mens’ 200m and eventually finished seventh in the third of three semi-finals. His time of 21.23 ranked no.20 overall. He ran 21.38 to finish third in heat one of the opening round to secure an automatic bid.

McCoy’s time ranked at no.24 headed into the semis field, led by 100m champion Letsile Tebogo of Botswana, who set a new championship record with his time of 19.99 in the heats.

“My strategy was to attack the curve and let the magic happen on the straight away,” he said. “It didn’t happen how I wanted to but I still made it to the semi-finals so I just have to work on it.”

Shimar Bain finished seventh in heat three in a time of 52.88 and did not advance at no.32 overall.

Paige Archer and Shatalya Dorsett failed to advance in the women’s 100m. Archer ran 11.33 to finish fourth in heat three, no. 33 overall and Dorsett was eighth in heat six in 11.94 to place no.44 overall.