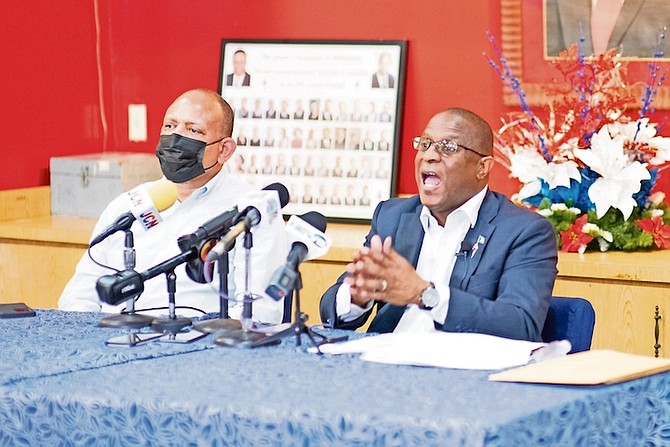 These included crime, the inflationary cost of living and the potential exit of a major investor on Grand Bahama.

During a press conference at the FNM headquarters, Mr Pintard spoke to a wide range of topics of concern that he claimed was not being properly addressed by the Davis administration, which he said appeared to be “disconnected”.

Topping the list of concerns was the looming closure of Grand Bahama’s Gold Rock, the supplier of precast, block and ready-mix concrete.

While Prime Minister Phillip “Brave” Davis has implored Gold Rock’s owners to reconsider the decision, Mr Pintard said he believes more needs to be done by the government, noting it “was most inappropriate” for the leadership on Grand Bahama to not alert the prime minister on what was happening in advance.

He also said the timing of the group’s announcement couldn’t have come at a more inconvenient time considering the country is already in the midst of hurricane season and that many are still struggling with the high cost of living.

“I reached out to the Prime Minister because unfortunately, he was not made aware of all of the relevant details,” Mr Pintard said. “He then got in contact with the company and this Tuesday, they were supposed to have addressed this particular issue,” Mr Pintard said.

“I urge the Grand Bahama Port Authority and DevCO to tamp down on the kind of statements that are being made as well as the family that runs this group of companies. Obviously, the conversation is not helpful to them sitting down and coming up with a reasonable resolution to this issue.”

“It is clear that from the group of companies, government intervention is what is required, and I understand regrets have been expressed that no one reached out to them during this particular situation. What will be the impact on Grand Bahama? One, a number of families, more than 100 families, are likely to have the breadwinner, or a contributor to the finances of that family without a job. Secondly, there are other companies in Grand Bahama that rely on these groups of companies and they too would be affected.

He also said: “There are a number of very serious developments on the island that started and others that are about to start that rely on the products and services of this group of companies - those are likely to be affected especially since as you aware, there are already disruptions in the supply chain in the global market and The Bahamas has been affected. We will be affected even more.”

“Furthermore, Grand Bahama’s economy we believe has the potential to rebound. This sends the wrong message by having this closure and many residents and businesses are still trying to repair their homes and facilities.”

The leader of the opposition spoke further to the economic hardships faced by many Bahamians, saying not enough assistance is being given out to struggling families.

“There are many families who still are struggling to eat,” he said. “They refuse to remove the VAT out of breadbasket items, but at the same time, they stop providing vouchers for the most vulnerable families. “Now we know Bahamians would rather work (and) earn their money and buy their own food but until that day, a number of our residents still need help. So, the very programme that was helping Bahamians, this government, sullied the names of countless non-governmental organisations that were helping us to meet the food insecurity in the country.”

He also doubled down on his criticisms of the government’s lack of transparency as it relates to the issuance of contracts.

As it relates to taxation, Mr Pintard said there needs to be widespread discussions “about what would be a better system of taxation than simply utilising VAT.”

He added: “We know that there isn’t sufficient money available to accomplish the things that they (the government) have in mind and it’s made worse by inflation because now your dollar is not going as far as it would have gone even two, three years ago.

“The government, however, has not been able to tell the population, where it is going to get the funds in order to finance the various initiatives that they have signaled that they will put in place - pay nurses and pay educators, to make sure that state owned enterprises are ran effectively and to build a new hospital in Grand Bahama and one in New Providence, to build various airports, including the one in in Grand Bahama that they’ve talked about quite a bit.”

He continued: “And so, what we are saying is one of the steps that government should take right now because we need a holistic approach is they should begin to engage the private sector, and the experts who are available in finance in putting together a white paper on taxation so the public can know exactly how we are going to generate the required resources to pay for the various things needed by the Bahamian people.”

Mr Pintard was also critical of what he viewed as a lack of a comprehensive plan to fight crime in the country.

Satan is right there with him

Would've thought leadership Pintard and his chairman was too busy appeasing two mans' ---- Minnis, and that other man's, over having time to mess up premiership "Brave" Davis. ----Yes?

lol all they doing is killing any change for an fnm gov. any time in the near future. We have no real opposition sadly.