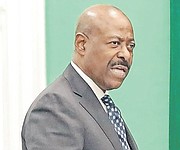 SOCIAL Services and Urban Development Minister Obie Wilchcombe said he intends to meet with church leaders this month to the discuss the issue of marital rape.

The minister said he called church leaders and suggested dates for the meeting.

“We’re putting together (an) agenda now,” Mr Wilchcombe told reporters yesterday. “We’re meeting with the Attorney General’s Office because all the stakeholders have to be included in our meetings and we’re planning that now together a meeting with all matters pertaining to child protection as well.”

Asked to reveal what amendments will be made regarding marital rape, he said: “It all depends on the dialogue. All depends on where our respective stakeholders are. Where we’re likely to go will depend on their involvement because we’re not going to arrive at a conclusion until we ensure there is across the board support.”

Pressed for a timeline of when the meeting will occur, Mr Wilchcombe said: “Yes, we’re going to meet during the course of this month”.

In June, Bahamas Christian Council president Bishop Delton Fernander said the church will support efforts by government to tighten the law to provide protection against rape for spouses in the period between legal separation and divorce.

Mr Fernander added it was the clergy’s understanding that martial rape frequently occurs during that time and the church would stand behind tightening the law to ensure there are penalties for this kind of abuse.

However, he admitted at the time that the church remains generally divided when it comes to marital rape.