Cyclists get in gear for Sunday’s gruelling road race 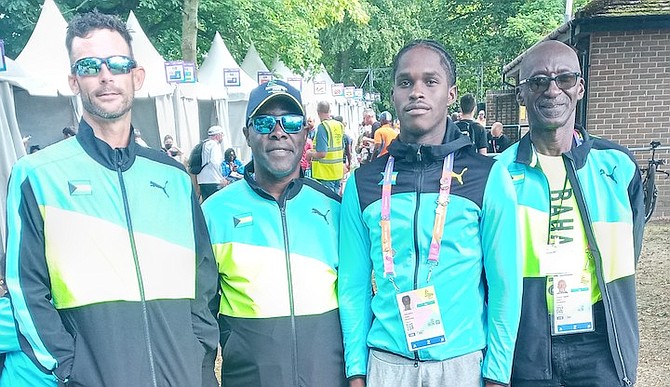 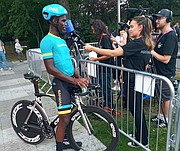 BAHAMIAN cyclist Felix Neely is interviewed by the host broadcast team yesterday after competing in the time trials of the cycling competition at the Commonwealth Games.

BIRMINGHAM, England — Having gotten their feet wet in the time trials yesterday as the cycling competition got underway at the 2022 Commonwealth Games, both Lorin Sawyer and Felix Neely indicated that they will now be better prepared for Sunday’s gruelling road race.

The duo, competing in their first global competition, had their share of difficulties on the course in West Park, but survived with a 44th place for Sawyer in one hour, two minutes and 19.72 seconds and 54th for Neely in 1:07.58.03 in the final spot. 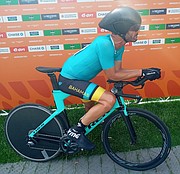 Lorin Sawyer on his bike after his race.

“It was a rough course. It’s a lot different from what we’re used to in the Bahamas,” said Sawyer, a businessman from Spanish Wells. “We’re used to having a flat course in the time trials, but there was a lot of turns and we really didn’t get a chance to test out the course.

“We got here late and only had a chance to ride it in a car. So we were totally blinded going into the race. It’s totally different when you are actually out there riding the course. There were a lot of turns and you kind of slow down more than you think. So it was very technical and that was what killed me.”

Sawyer, who was accompanied by his wife Dianne, said he anticipates a much better showing in the road race. “Being in the peloton makes it so much easier,” he pointed out. “I have a lot of confidence going into the race. It’s also good to have a teammate in the race. So I think we should be able to work well together.”

For Neely, the youngest competitor in the field at age 19, it was an experience that he won’t soon forget.

“I felt like I did the best I could in the time trials and that should get me ready for the road race,” Neely said. “I just want to say thank you to the Bahamas Cycling Federation for allowing me to make it here and also the people from Black Village, who really supported me.”

At the start of the race, both Neely and Sawyer also slipped and fell on the first turn as they had to slow down and adjust their brakes to avoid colliding into the barriers along the course that separated the spectators.

“That was a very sharp turn and I wasn’t expecting it. As I approached it, I said I was going too fast, so I had to slow down.

“Then my brakes slipped, but I managed to hold it just before I hit the railing,” Neely said.

“I was able to make up the time, but it was cold and windy. I wasn’t used to it. It was a very hard course. I’m happy that I finished, I was very proud when I passed the finish line.”

As he prepares for the road race, the CR Walker Secondary High School graduate now employed at Cycles Unlimited as a mechanic, said he will use the next two days to do some hydration before he goes “full blast” on Sunday.

Kenton Roker, who serves as the coach of the team, said he felt Neely and Sawyer did the best that they could.

“Felix is the youngest competitor in cycling and he did extremely well for his age and his experience,” Roker said. “Lorin Sawyer also did extremely well, considering that we don’t have any hills to train on. But the spectators were spectacular. They really cheered them on.”

Chef de mission Roy Colebrooke, who also serves as the president of the Bahamas Cycling Federation, said the appearances of the two cyclists comes on the heels of Jay Major and Anthony Colebrooke, who both represented the Bahamas at the games in the Gold Coast, Australia, in 2018.

At those games, Colebrooke got 52nd in the time trials and he and Major didn’t complete the road race. Colebrooke said Sawyer and Neely successfully completed one half of the competition here and they eagerly await to see what they will do in the second half on Sunday.

“Felix was the youngest competitor in the field, competing against some top-notch competitors and Lorin’s time succeeded any time we would have done previously, so we’re looking forward to the road race on Sunday,” Colebrooke said.

In preparation for the event, Colebrooke said they will ensure that both competitors get a dry run through the course because it’s so technical when they go out and compete. He said he expects both cyclists will be ready for the challenge ahead of them.