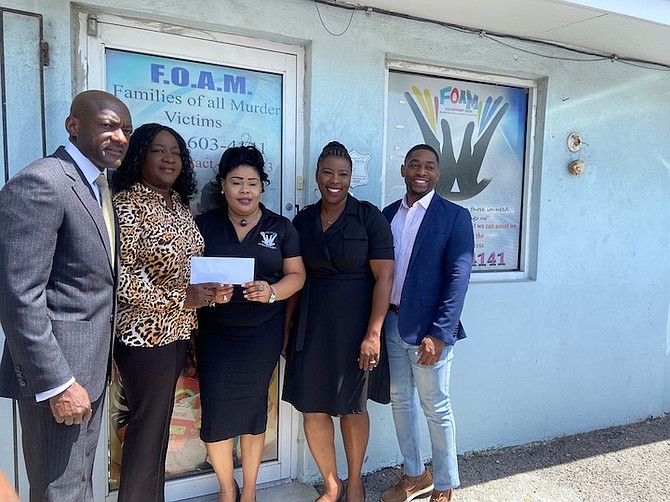 FAMILIES of All Murder Victims (FOAM) received a donation from Senators in support of the advocacy group’s back-to-school initiative on Friday.

Khandi Gibson, the founder and director of FOAM, was presented with the donation on Friday by Senate President LaShell Adderley along with other Senators, including Senate Vice President Barry Griffin, Maxine Seymour and Ronald Duncombe. Although, some of the Senators involved were not present, Ms Adderley noted that each of them contributed to the cause.

The amount of the donation was undisclosed.

Ms Adderley said: “The Senate body is here today to make a contribution to you (Ms Gibson), to the children in particular who are going back to school, we know that going back to school is very expensive. So, we are making a contribution to purchase shoes and uniforms for the children who would have lost their father or mother due to murder. We just want to say thank you for all that you are doing and all that you have done. We also want to send wishes to congratulate you for being a member of the national honours for the Commonwealth of the Bahamas, congratulations to you.”

The Senate President highlighted that both PLP and FNM Senators came together in a bipartisan effort to be part of the contribution.

Ms Gibson expressed her empathy for children of parents who have been murdered.

“They didn't ask to come here, didn’t ask to be left without a parent, some even lost both parents due to murder,” she said. “This kind gesture would go a mighty long way. For 10 years now we do a campaign where we ask persons to adopt a child who would have lost a mother or father or even both parents are murdered.”

In addition to thanking the Senators for their donations, Ms Gibson spoke about her efforts against crime in the country. She said she has communicated with the Minister of National Security, Wayne Munroe, to establish a better relationship between the community and the police.

“I feel like there needs to be a forum where we both can engage ourselves in a conversation because at the end of the day the police need us and we need the police,” Ms Gibson said.

With domestic violence prevalent, Ms Gibson said she is still advocating for Crown land for a shelter for women. She explained her passion alone is not enough and that FOAM is in need of funding along with partnerships in order to create a better country for all.