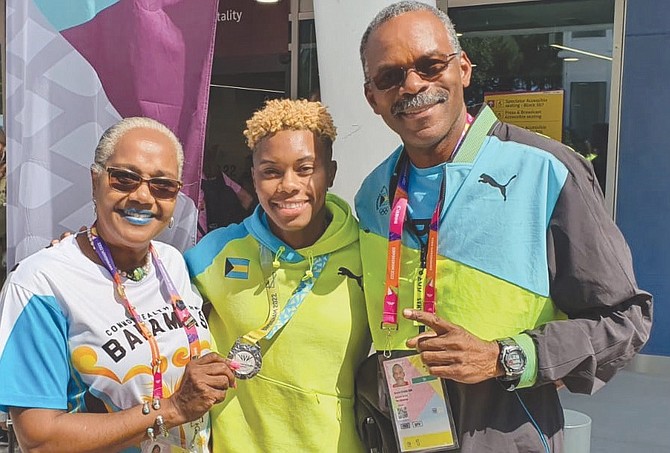 Devynne Charlton, celebrating with her parents.

In passing up the opportunity to earn some Wanda Diamond League points in Poland on Saturday, Charlton stormed from behind yesterday in a time of 12.58 seconds to pick up the silver behind Nigeria’s Tobi Amusan, who established a games record of 12.30 coming off her World Championship title with a world record of 12.12 in the semifinals.

Great Britain’s Cindy Sember got the bronze in 12.59. 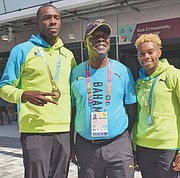 “I feel good now. When I finished the race, I thought I was fourth. I was just hoping to be in the bronze medal position, but after getting the silver, I can’t complain,” said Charlton after she leaned at the tape to edge out England’s Cindy Sember.

In joining LaQuan Nairn, who the day before captured the first gold medal by a Bahamian male long jumper, Charlton’s medal gave the Bahamas a total of two medals on the final medal chart, finishing tied with Grenada for the 23rd spot.

With two silver medals to her collection in one season, Charlton said she can’t complain although she would have preferred to secure a medal at the World Championships where she was seventh in Eugene. “I’ve been a senior since 2015 and World Indoors was my first international medal and to come out here and make podium again is very special.” Charlton said.

“I just hope that I can go home and do it again at NACAC (Championships in Grand Bahama from August 18-21).”

In her race, Charlton admitted that her start wasn’t what she anticipated as she stumbled out of the blocks. But she was able to make up enough ground to stay in contention for a medal. “I tried to hold form coming down the line,” Charlton stated.

As she crossed the finish line, she returned to the stands to be greeted by her parents, Laura and David Charlton, as she was draped with the Bahamian flag to start the celebrations. They were joined by Team Bahamas head coach Bernard Rolle and assistant coach Ravanno Ferguson.

“Anywhere I go in the world, I know they will be there to support me and they’re my biggest fans, so just having them there to greet me first was very special,” Charlton said. 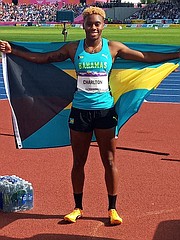 Her mom said it was simply a dream come true.

“We know what her plans and her goals were,” said Laura Charlton, who did the same thing at World Indoors. “She was chasing her dream of getting on the podium for the Bahamas and so that was an exciting moment for us to witness her achieving her goal. This year has been an awesome year for her. Thank God.”

And David Charlton, who gave all the credit to her coach Bahamian Lonnie Greene, who was also in attendance at the games, said he’s just elated for his daughter.

“I’m on top of the world. I’ve never been this nervous as an athlete, but as a parent, this has been nerve wrecking,” he said.

“Kudos to coach Greene, who planned the whole thing. He coached her though a very competitive year and everything came together, so kudos to him for getting the job done.”

" I thought I was fourth. I was just hoping to be in the bronze medal position, but after getting the silver, I can’t complain,”

Excellent! I can see the pride in her parents. It's wonderful.