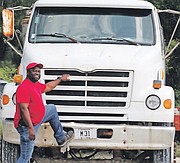 As the sole company offering trucking services in San Salvador, Aaliyah's Enterprises was well on its way to becoming a thriving venture. After receiving funding from Access Accelerator in 2019, the road to success looked smooth until the onset of COVID-19 a few months later brought the business to a screeching halt. Now that the world has returned to normalcy, Alan Fernander (pictured) is determined to get his trucking company back on the road again.

A San Salvador businessman is beating COVID-19 economic slump with the Small Business Development Centre (SBDC) $20,000 funding he received in 2019.

He said: “I opened a food store on my island because I saw an opportunity to establish one, but it was never my passion. After things didn’t work out, I sat down with my oldest daughter, Aaliyah, who encouraged me to pursue my passion for the mechanic trade. After thinking about it, I decided that I would give it a try.”

Fueled by ambition and his eldest daughter’s encouragement, Mr Fernander launched his trucking and automotive business in 2019. Though he shifted from selling snacks, he kept the name Aaliyah’s Enterprises, specializing in auto repairs, diagnostics, car part sales, and trucking services.

“Mechanical work has been my passion for years,” Mr Fernander also said. He was first introduced to the trade as a teenager when he apprenticed for a mechanic after high school. Later, he moved to New Providence and began working for the Bahamas Power and Light (BPL) in 1996. “When I told them I was interested in mechanics, they allowed me to work in that area, and I obtained my automotive and industrial mechanics certifications,” he said.

After gaining a wealth of knowledge and experience in New Providence, Mr Fernander returned to San Salvador. He started small, initially offering trucking services to a hotel on the island and in 2019 expanded his services, officially opening his mechanic’s shop.

“Funding is always a key factor in starting any business, and while I started with the little resources I had, it was not enough,” Mr Fernander said. “I learned about Access Accelerator on the news, and then a friend of mine told me more about the programme. I decided to sign-up because I realized it was an opportunity for me to grow my business and develop it into the vision I had in mind.”

Through Access Accelerator, Mr Fernander developed a business plan, mapping out his strategy to replace his ailing truck and purchase the inventory and equipment he needed to run a one-stop shop for auto parts and repairs.

He added: “The idea was when people brought their cars to my shop for diagnostics and repairs; parts would be available for them to purchase.” He continued, “I received $20,000 in funding and used the money to repair my truck and buy as much equipment and inventory as I could.”

At the time, Mr Fernander was using his truck to haul containers from the mail boat to hotels. He originally planned to use the profit from his trucking services to purchase more inventory for his store, but “COVID-19 came and shut everything down.”

“After the hotels closed down, everything on the island came to a standstill,” Mr Fernander said. “That caused my income from trucking not to materialize, but my overhead expenses still existed. That meant that whatever little income I generated had to go towards paying different bills.”

Although the pandemic veered Mr Fernander’s business plans off course, he is steering Aaliyah’s Enterprises back in the right direction.

He also said: “I never got the amount of inventory and equipment I wanted for my shop because of the pandemic, but now that the hotels are trying to reopen, they have expressed interest in using my services again.”

While COVID-19 may have set Mr Fernander back, he said he refuses to allow the pandemic to keep him down and is hopeful for the future.

`“In the years to come, I want Aaliyah’s Enterprises to be the leading trucking company in San Salvador,” he added. “No one else on the island is offering the services I do right now. That’s why I’m trying to capitalize on that fact as best as possible.”

Now that Mr Fernander is back on the path to success, he said he is grateful for the help he received along the way. “I don’t think I’d be where I am right now without the help of the Access Accelerator,” he said. “I still have a long way to go, but I am grateful for their assistance, and I look forward to the road ahead.”