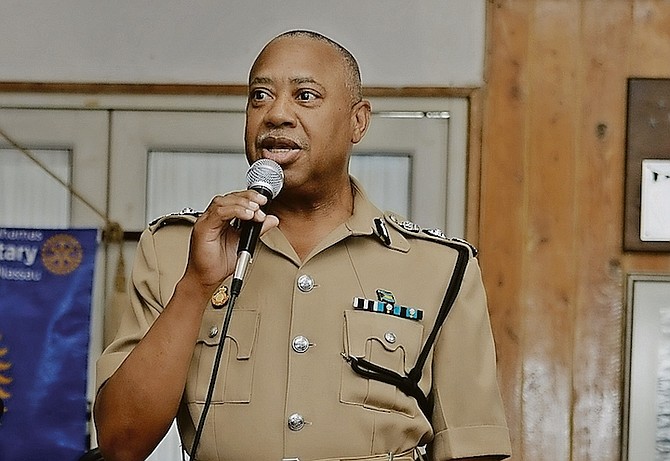 POLICE Commissioner Clayton Fernander says he fully supports Minister of National Security Wayne Munroe’s position that people charged with serious crimes should be kept in custody rather than be released on bail.

According to the commissioner yesterday, 55 percent of murder victims for the year were on bail.

Minister of National Security Wayne Munroe had earlier told a local daily that people charged with murder should be kept in custody for their own protection.

According to Mr Munroe, more than 30 men who were out on bail this year were murdered.

When asked about the minister’s comments on keeping persons on remand due to an increase of persons being killed on bail, Mr Fernander said he fully supports the minister’s approach.

The commissioner added that there could also be swift justice by allowing persons to go straight to trial and alleviate instances of retaliation.

“If you’re lucky enough to get off base on some things happening, then that’s fine,” he said. “But let’s bring these matters in a reasonable time.

He stressed that: “We have to move towards this.”

Additionally, the commissioner highlighted Operation Ceasefire, which has been used in targeting prolific gang members along with removing firearms and drugs off the streets.

Gang violence has been an ongoing issue in the country, particularly with gang activities and affiliations happening amongst schools.

When asked if the police have any strategies put in place to combat gang violence in schools, the commissioner responded that they are working in partnership with the Ministry of Education.

Mr Fernander noted that they have a plan which should be rolled out shortly.

He added: “As we speak, we have a team of security officers who will be assisting the police in the schools who are training now, a one-week training course at the police college.”

These plans with the Ministry of Education were ongoing, he reiterated.

In terms of the ShotSpotter system, he said officials had just signed a contract last week to extend the system for certain areas that are high in crime.

Mr Fernander explained the ShotSpotter has been working and providing the necessary data needed.

Wow its almost as who ever the bail record keeper or electronic monitors are letting aspiring murders get the info they need to commit their crime. Not saying how this is happening but its occurring somehow.

Maybe someone has a loose tongue or their are traitors in the midst.

Wow, rational and intelligence abounds. Kudos to both of you.

I'm sure there are some murders where there are plenty of witnesses and where the police caught them immediately after the act. For some there's probably clear video evidence as well. In these cases then yes I agree murder suspects should not get bail. If the evidence is weak (some gang member snitching out someone) then they should be able to get bail because there's a good chance the a conviction won't hold.

That's ridiculous. I certainly don't trust the police or prosecutors with my freedom. Do you want to be locked up in one of the worst prisons in the 3rd world with no bail for 5-10 years awaiting trial for an offence you did not commit, purely because an officer or prosecutor was lazy or vindictive that day?

How about we reform our judiciary? Maybe we could take cases to trial in a "reasonable" amount of time like our constitution demands.

Maybe we could reform our laws and keep the poor man with a marijuana cigarette out of jail and instead fill the space with gang members.

Perhaps we should consider that when these young men have "nothing to live for" it directly correlates to life having no value for them.

Does anyone remember when the last commissioner proclaimed they'd solved the murder problem a few weeks into the COVID lockdown? No murders at night for weeks on end. Of course they denied effusively that the cessation had anything to do with the curfew. You know what the criminals did? They kicked off a spree of never before seen daylight murders.

I'm waiting to hear about the increase in in prison murders.

"ShotSpotter has been working and providing the necessary data needed"

Has shotspotter led to the capture of anyone seconds after a crime? What percentage of gun crimes has Shotspotter resulted in the same? That is the only possible success measure for the system. Anyone within 2 miles of gunfire could report it, our neighborhoods are sardine cans.