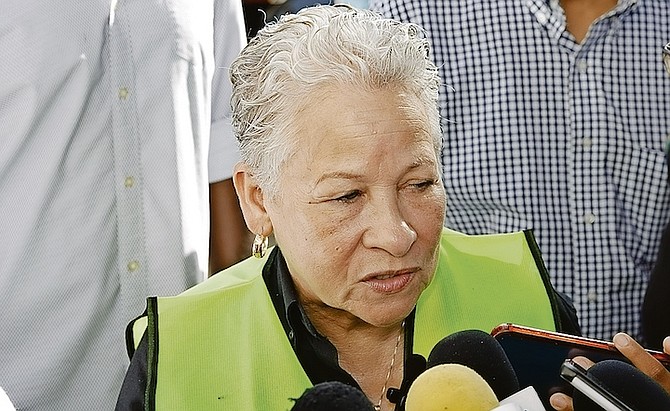 THE Ministry of Education is moving full steam ahead with plans to revamp and redevelop public schools, according to Education Minister Glenys Hanna Martin.

The minister said yesterday at least two schools - including Government High - were in “deplorable condition”.

Despite the task at hand, Mrs Hanna Martin said the repairs of all schools will be completed by the start of the new school year.

The minister said a key priority for her ministry is not only to get children safely back in the classrooms, but to also create an environment conducive to learning.

According to Mrs Hanna Martin, some of those schools were left in a deplorable condition and are now in need of serious repair.

“The level of extraordinary commitment and dedication, this is beyond a commercial enterprise what you see happening there with the contractors and the school administration,” Mrs Hanna Martin said.

“This is an absolute all-on commitment including the state to revamp our school plan, to ensure that the children and young people of this nation go into an environment where they feel comfortable, they can learn, where they can be spectacular.

“That is what we are interested in. We want a renaissance in education where our children blow our minds in terms of their high performance because we know it’s possible.

“And so, the schools we’ve seen so far, the two of them they were in close to, particularly Government High, in many instances deplorable conditions and students were coming to those environments.”

Construction works being conducted at some of the educational institutions include installation of elevators and ventilators and balcony and stairway repair.

Works and Utilities Minister Alfred Sears said many of the structural issues at schools had existed for many years.

“The Minister of Education has mandated really that this not be a cosmetic exercise,” he said. “So, in so many of the plans, you have structural problems which have existed for many years and as the repairs are being done, some of those long standing structural defects, challenges, deterioration are being addressed.”

While the Education Minister could not give a price tag for repairs, she said it is expected that all renovations will be completed by the start of the new school year.

“The objective is to get school open and that is a mandate, and you know a lot of the work has been truly significant. This particular campus and the Minister of Works can speak more to it was seriously a huge enterprise as you can see,” she said at T.A. Thompson.

“It’s a three-storey building and there were significant challenges and work is underway, probably more than was initially anticipated but the objective is to get school open and we’re trying very hard and everybody is working very hard.”

Prime Minister Davis thanked the minister, her team as well as the contractors involved for their hard work in getting schools ready.

He said: “There is a psychological truth that if we are in squalor, our minds become squalored and if you are in a clean and pristine environment so will your mind be clean and pristine and so the mandate expressed by the Minister of Education that we ensure that these environments and venues where are children are being taught and teachers are teaching in such a state that it helps to relieve the minds of our people to want to learn and to watch to teach.”

As it relates to school repairs on the Family Islands, Mrs Hanna Martin said works are still underway there and should soon be completed.

She also spoke specifically to Patrick J Bethel High School in Abaco, which suffered extensive damages from Hurricane Dorian in 2019.

While renovations at the school have been largely completed, she said there remains some plumbing issues at the institution which are being addressed.